The book-to-bill ratio for rigid boards and flexible circuits combined remained below 1.00 in October although shipments increased marginally. 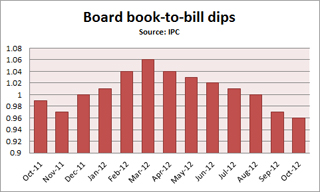 A book-to-bill ratio of 0.96 means board manufacturers received $96 in new orders for every $100 of orders that they shipped in the month.

Sharon Starr, IPC director of market research, said the industry would recover, but it may not be until early 2013. “Action by the U.S. Congress to deal with the ‘fiscal cliff’ will have a significant impact on economic growth and business confidence,” said Starr.

The book-to-bill ratios and growth rate for rigid PCBs and flexible circuits combined are heavily affected by the rigid PCB segment. It represents about 90 percent of the current PCB industry in North America.