New Orders for Printed Circuit Boards Declined in May

However, combined shipments of rigid boards and flexible circuits increased 1.1 percent compared to May 2010. 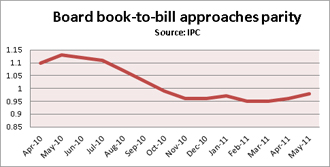 Compared to the previous month, shipments of rigid printed circuit boards and flexible circuits declined 0.4 percent, while new order bookings increased 1.3 percent. The book-to-bill ratio in May climbed 0.99, up from 0.96 in April, IPC reported. A book-to-bill ratio of 0.99 means that board manufacturers got $99 of new orders for every $100 of orders they shipped in the month.

"We are starting to see some improvement in the North American PCB book-to-bill ratio," said IPC President & CEO Denny McGuirk. "Although it is still just under parity and we are seeing flat growth in rigid PCB sales, the flexible circuit side of the business is showing strong sales growth."