This article will provide an overview of silicon carbide products for power conversion, including devices from Cree, Infineon Technologies, Ixys, Rohm, and STMicroelectronics.

Designers of switched-mode power supplies aiming to increase energy efficiency are faced with a number of tradeoffs that often involve increased cost and complexity, or reduced power density if they stick with conventional silicon power devices. Wide band-gap materials such as silicon carbide (SiC) provide a new degree of freedom in power-converter design, especially where high power ratings are needed.

The wide band-gap and critical-field rating leads to higher breakdown voltages: ten times higher than silicon. This makes it possible to make devices that are much thinner and smaller so that, even though SiC’s carrier mobility is worse than silicon’s, it can carry more current with fewer losses. On top of that, much higher thermal conductivity leads to much improved power densities. Silicon carbide devices can run reliably at a junction temperature of more than 150°C, helping to save on heatsink and packaging costs.

The technology is still developing and there is not a full portfolio of devices but there is a growing range of diodes and the first commercial MOSFETs have been launched. This article will provide an overview of silicon carbide products for power conversion, including devices from Cree (CMF10120D, CMF20120D, CSD01060), Infineon Technologies (IDD03SG60C), IXYS (FBS16-06SC), ROHM (SCS120KE2C) and STMicroelectronics (STPSC2006CW).

Tradeoffs are commonplace in power-component design. Properties that are good for energy efficiency – such as low on-resistance – can lead to process and design decisions that result in less desirable characteristics such as reduced breakdown voltage. Although silicon remains the material of choice for most power devices, other options are appearing that will make it possible to reduce the effects of these tradeoffs. Options have opened up thanks to the arrival of two wide band-gap materials now being actively investigated and productized by manufacturers. One is gallium nitride (GaN) and the other is silicon carbide (SiC).

The band-gaps of GaN and SiC are around three times larger than the band-gap of conventional silicon. The critical field rating is approximately ten times higher than that of silicon. This leads not just to higher breakdown voltages, but better performance at high temperatures, which reduces the cost of power-supply products by allowing the use of smaller or even no heatsinks, as well as lower leakage.

Not only is the high-temperature performance of high-band-gap devices better than that of silicon, but there is greater thermal compatibility with ceramic packages designed for use in hot conditions. This makes it simpler to match wide-band-gap devices to packages that are expected to go into applications where wide temperature excursions are expected – potentially even inside motors themselves.

The electron mobility of SiC is about two-thirds than of silicon, whereas GaN has mobility about 30 percent better than silicon. However, there are factors that currently make SiC more attractive for the power devices currently under development.

SiC power devices can be fabricated in a way that is analogous to silicon in that SiC epitaxial layers can be formed on a SiC substrate. The result is a good crystallographic match between the epitaxial layers and substrate. That is not often the case when dealing with alternative materials to silicon. The match allows not just an electrically conductive path from the top to the bottom of the wafer, but one that is thermally conductive. This has advantages in terms of the device structures that can be fabricated, as it allows vertical devices to be built.

The wafer cost of GaN is about ten times higher than that of SiC and its thermal conductivity is not as good as that of SiC, which could lead to problems in high-power applications. Although the wafer cost of SiC is itself significantly higher than that of silicon, SiC devices can be made denser thanks to their improved thermal characteristics, helping to keep device prices competitive given their improved performance.

Thanks to the high critical field rating and breakdown voltage, the drift zone of a vertical SiC diode or transistor can be made much thinner than that of a silicon device. This leads to a reduction in the on-resistance resulting in significantly lower power losses when the device is switched on.

As examples of what SiC MOSFETs can do, Cree has launched its CMF10120D and CMF20120D as high-efficiency alternatives to insulated-gate bipolar transistors (IGBTs) and silicon power MOSFETs.

Experiments by Cree have shown that for key metrics such as the figure of merit (FoM), SiC MOSFETs show superior performance. The FoM is the product of on-resistance and the total gate charge, with lower values indicating better performance. The FoM of the CMF20120D is 7.12 ΩnC compared to a competitive silicon MOSFET, albeit with a reduced breakdown voltage of 1200 V, which has an FoM of 32.4 ΩnC.

The Cree SiC MOSFETs are capable of delivering switching frequencies that are up to ten times higher than IGBT-based solutions. Their higher switching frequencies can enable smaller magnetic and capacitive elements, helping to shrink the overall size, weight, and cost of power electronics systems.

There are design considerations to bear in mind with SiC MOSFETs and they behave in slightly different ways to conventional silicon devices. The transconductance is lower than that of a comparable silicon transistor and the SiC has stronger short-channel effects. The lower transconductance causes the transition from triode to saturation to be spread over a wider range of drain current. The result is that the CMF20120D behaves more like a voltage-controlled resistance than a voltage controlled current source.

The CMF20120D needs to be driven with a higher gate voltage swing than is customary with silicon MOSFETS or IGBTs. Furthermore, because the gate voltage will have a greater effect on the rate of rise of the drain current due to the lower transconductance, the gate drive needs to supply a fast rise and fall time gate pulse to ensure fast switching speeds. The parasitics between the gate driver and the CMF20120D need to be minimized to ensure a fast rise and fall time with good fidelity. Although the gate voltage is higher, the reduced gate charge relative to silicon devices leads to lower gate energy overall.

Because SiC MOSFETs have different characteristics to those of silicon devices, Cree provides accurate SPICE models of its devices so that their behavior can be analyzed accurately in circuit simulations. Although the current range of MOSFETs is relatively limited, SiC diodes are now more commonplace and finding their way into key applications because of the advantages that they offer over conventional silicon devices.

Take, as an example, the common requirement in power-supply design for active power factor correction. Since 2001, designers of AC/DC switched-mode power supplies have had to follow the IEC-61000-4-3 requirements to limit the harmonic frequencies that are fed back into the power grid. A key requirement for an AC/DC boost converter is for high-voltage diodes to perform rectification of the mains electricity supply. The input stage of such a power supply requires devices with a blocking voltage in the 500-1000 V range. 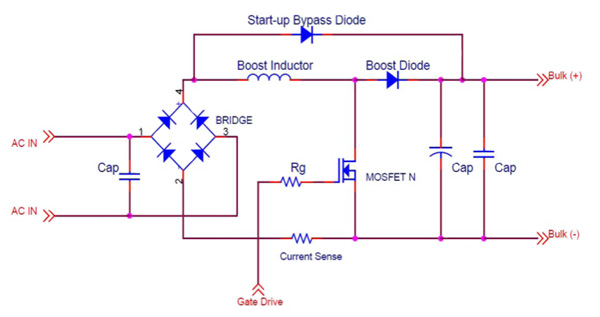 For power supplies with an output power rating higher than 300 W, active PFC boost converters are normally designed to operate in continuous conduction mode (CCM). Discontinuous mode is possible but tends to result in designs that are oversized and which cost more. CCM offers a number of benefits. The peak current stress is low, which leads to reduced losses in switches and other components. Furthermore, the input ripple current is low and at a constant frequency, making it easier to design filters that remove much of the ripple. Critical and discontinuous conduction modes result in large swings in current, which stresses the inductor in particular.

However, CCM has a drawback in that the diode that follows the inductor is responsible for energy losses when it turns off, as well as unwanted electromagnetic interference, even with ultrafast, high-voltage silicon devices. As it turns off, the diode injects a large current spike into the circuit that, in turn, leads to a high drain current in the circuit’s controlling MOSFET. This reverse current increases with temperature that can lead to thermal runaway in adverse conditions. To avoid problems, designers are often forced to use larger-die devices for both MOSFET and boost diode in order to meet efficiency and thermal specifications. 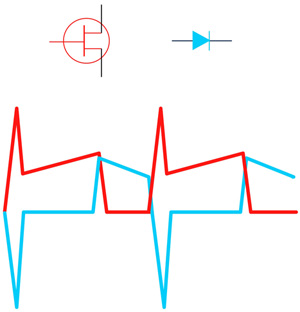 Figure 2: Typical current waveforms for a silicon diode and MOSFET in a continuous conduction mode converter for showing the large current spikes after switching events in both the diode and MOSFET.

One possibility is to use silicon Schottky diodes, as there is no need to remove excess carriers from the drift region as there is for standard pn diodes. Silicon devices tend to have comparatively low blocking voltages, however, often in the range of 250 V. It is hard to push the blocking voltage higher because this leads to higher leakage currents and on-resistance, both of which lead to higher energy losses.

SiC makes it possible to implement a Schottky diode where the reverse recovery charge is extremely low – less than 20 nC in the case of some devices – as it is the result of junction capacitance rather than the stored charge that afflicts silicon devices. A further benefit is that the reverse recovery charge is independent of temperature and forward current. As a result, the maximum temperature of 175°C is possible with devices such as the Cree CSD01060.

The CSD01060 is a 600 V device supporting up to 2.2 A of current at 125°C and with a total capacitive charge of just 3.3 nC. Its operating temperature is up to 175°C. The device offers temperature-independent switching characteristics as well as a zero forward recovery voltage.

Similarly, the IDD03SG60C, a member of Infineon Technologies’ third generation thingQ! family of SiC diodes exhibits no reverse or forward recovery characteristics. Rated for up to 3 A at or below 130°C, the device offers very high surge current support even at elevated temperatures. The device will handle surge currents of up to 9.7 A, even at 150°C and a peak current of 100 A at 25°C. The total stored capacitive charge is just 3.2 nC.

STMicroelectronics designed its STPSC2006CW to function well in boost-diode circuits that need high current-carrying capability. This is a 600 V Schottky diode, built on a SiC process with a stored capacitive charge of 12 nC, which will operate at up to 175°C. It will sustain a forward root-mean-square (RMS) current of 18 A, with a repetitive peak forward current of up to 40 A at 150°C.

The ROHM SCS120KE2C provides a blocking voltage of up to 1200 V and a typical forward current of 10 A. The device has a total capacitive charge of 34 nC and supports switching times down to 16 ns.

SiC diodes have also been packaged in modules for greater convenience. IXYS has combined four Schottky diodes into its FBS16-06SC to provide the functions of a rectifier bridge for circuits such as AC/DC PFC converters. With a blocking voltage of 600 V, the bridge supports a forward current of 5 A with a maximum of 20 A at 25°C.

SiC is still a relatively young technology, but the proliferation of diodes for boost converters together with the appearance of the first commercial MOSFETs shows how SiC could supplant conventional silicon devices in a number of power-conversion applications.