New Interface for Control and Coordination of Solar Energy


Although significant progress has been made in harvesting solar energy for a single input power system, there has been little focus on the control and coordination of solar energy conversion with other actively controlled sources and storage devices. The operation and control of solar power conversion using a multiport power electronic interface (MPEI) is a new possibility explored here, with special emphasis on load sharing and battery recovery modes.

Solar power conversion usually takes place in two forms: solar-to-chemical and solar-to-electrical. The typical applications are a solar-based battery charger and a solar-source inverter. Single-source two-stage structures, and multi-converter front-end systems are commonly used for solar power processing but they have problems controlling the output voltage or balancing the power between harvesting and consumption.

A six-phase-leg structure for the MPEI can interact with fuel cell, solar panel and wind turbine renewable sources, as well as one battery for energy storage, and a single-phase ac-load. As indicated in Figure 1, the upper switch for unidirectional converters is disabled, using only paralleled fast diodes. Additionally, the ports that interface with the battery storage and ac-load are bidirectional. The objects under investigation are circled in Figure 1, including the phase legs for solar, battery and inverter stages. 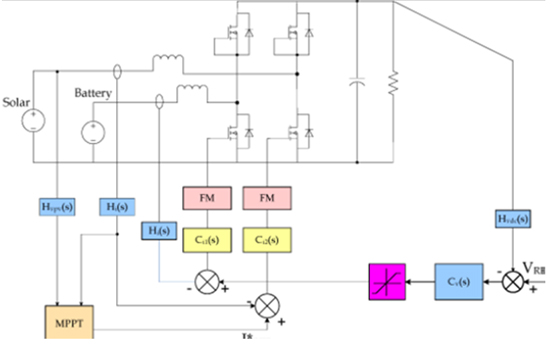 The generic ACM control block diagram involves an outside voltage loop and an inner current loop. In the case of a direct solar current control, the design target only resides inside the blue block. The control-to-current transfer function can be obtained from a small signal average model of boost converter.

In the battery recovery mode operation, there is no demand from the ac side and the harvested maximum power from the solar panel is directly transferred to battery storage. Since the solar panel voltage varies with sun irradiation intensity, buck or boost operation will be needed at different irradiation levels. Independent control of the solar power and battery charging current might cause power imbalance and lead to dc link-voltage fluctuation. A current-mode maximum power transfer (CMMPT) control structure is proposed for this particular operation mode (Figure 4). Shown here, the control system structure for CMMPT is presented in transfer function blocks. GiL is the equivalent control-to-charging current plant with inner current loop under PI controller compensation. GiL1d is the control-to-solar current transfer function, and GiL2d is the control-to-charging current transfer function. The charging current reference is generated by the MPPT routine. The charging current controller generates the inner current reference for solar output current; the resulting PWM signal will gate two active switches synchronously.

The start-up phase of the MPPT in load sharing mode took about 10 s to reach maximum power point. The solar switching cell is under direct current control for maximum power tracking while the battery switching cell is under ACM control to stabilize the dc-link voltage. During a pulse load of 300 W, the tracking of the solar power was hardly affected by the load dynamics, and the battery switching cell handled the load dynamics by providing a pulse current. This new interface successfully showed how to control and process solar energy using load sharing and battery recovery modes.