Diabetes is a debilitating condition suffered by some 366 million people worldwide. Its treatment today requires the patient to perform regular self-administered measurements of blood glucose levels, accomplished by puncturing the skin to draw blood. This is a painful procedure and, constantly repeated, contributes to the distress the patient suffers.

So what if proven radio-frequency technology could remove the need to draw blood? Near-field communications (NFC) is an RF protocol for exchanging data between devices that are close or touching (<10 cm apart). It is now primed for mass adoption because of the Android operating system’s support for it in smartphones and tablets.

Now, for instance, medical equipment manufacturers are examining the potential to implant a tiny NFC-enabled blood glucose sensor immediately beneath a diabetes patient’s skin. The sensor could then be read at any time simply by holding an Android phone or tablet running a dedicated app next to the implant.

The host device could upload the reading automatically to the patient’s medical practitioner. It could also be programmed to remind the patient to take regular readings, and to alert medical staff if the patient failed to take a scheduled reading.

An NFC-enabled sensor is ideal for this application because:

This example of implantable blood glucose measurement demonstrates the promise of this new type of NFC-enabled sensor – but in fact this device type is capable of being used in hundreds of applications in many market sectors.

An NFC-enabled sensor is an RFID tag that incorporates a sensor interface (for conditioning and digitizing a sensor’s input signal). Like any other RFID tag, it has a unique ID which allows the user to validate the origin of an object. However, it can also verify the environmental conditions to which the object has been exposed (see Figure 1), or provide other kinds of measurements, such as biological data from implanted sensors.

The addition of sensor-acquired data to the tag does not alter the basic method of communication: the unique ID and sensor data may be read when the tag comes into proximity with either an RFID reader or an NFC-enabled phone with a dedicated app.

Of course, there are other ways to implement wireless sensing. It is easily possible today to attach a sensor to an object, to interface it to a microcontroller and RF transceiver in order to set up wireless communication between an intelligent sensor and a reader.

Implementing this function with an NFC-enabled sensor provides for a much simpler system design, and offers a much more flexible approach to power management. In fact, for relatively low data-rate and short-range applications, NFC is a very attractive technology:

In fully-passive (batteryless) mode, the NFC-enabled sensor harvests energy from incoming RF emissions (from a reader) to power the sensor interface and RF transmissions. In semi-passive (battery-assisted) mode, the NFC-enabled sensor can operate stand-alone in applications requiring autonomous and long-term monitoring. Alternatively, it may provide a user-controlled, on-board power source for a sensor.

The life of a sensory tag might include operation in both modes: semi-passive until the battery is exhausted, and thereafter in passive mode. (Data is stored in non-volatile memory and is retained when the device is not powered.)

A fundamental principle of the operation of RFID systems is that the tag gets all the energy it re- quires from the field generated by the reader. In an NFC-enabled sensor, this harvested power (typically around 4 mA at 3.3 V) can also be used to power a sensor. Even if the harvested energy is not sufficient for the sensor – for instance, if the tag has a small antenna or is a long distance from the reader – it is possible to add a small supplemental power supply in the form of a capacitor that is charged before the measurement, and from which power is drawn during the measurement.

Operation of an NFC-enabled sensor in fully passive mode enables design engineers to open up their imaginations to a new range of possibilities. The lifetime of the tag is theoretically unlimited, and it requires no wired connections. So these sensory tags can be embedded, for instance, inside structures such as walls and hermetically-sealed products. One could imagine builders embedding a new class of NFC-enabled humidity sensor into the walls or flooring of a house next to water supply pipes or waste water drains. This would enable the early detection of leaks that today would not be found until they had caused severe damage to the structure.

Semi-passive tags include an on-board power source, usually a battery, to support tag and sensor operation. Data transmission operates in the same way as in a normal passive tag, using backscattered power emitted by a reader.

User-controlled semi-passive sensory tags spend most of their time in a quiescent state, in which the current drawn from the battery is negligible. Sensor functions and measurement are activated by the user, typically when the device is woken on detection of RF emissions from a reader or NFC device.

Stand-alone semi-passive sensory tags used in autonomous long-term monitoring applications (so-called data loggers) can be activated by external events, or periodically triggered by an integrated real-time clock (RTC). Such applications would require a continuous current of typically 2 µA from the battery to support the RTC or event-triggered wake-up. Such condition-monitoring NFC sensory tags could be fitted on goods that require special care during transport. At the end of the supply chain, an NFC-enabled reader device checks the sensory tag and raises an alert if non-approved conditions have occurred in transit. In addition, the sensor data are time stamped, allowing for detailed event monitoring. 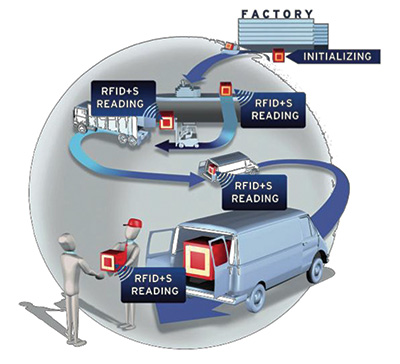 Figure 1: An NFC-enabled sensor enables the conditions in which an object is kept, as well as its unique ID, to be monitored.

The applications of NFC-enabled sensing, then, require an energy-harvesting capability, a sensor interface, power management circuitry and a real-time clock (RTC). These functions are now provided in the SL13A, a single-chip NFC sensory transponder from ams (see Figure 2). The chip complies with the NFC-V (ISO15693) standard, and incorporates an on-board temperature sensor.

The sensory tag works in fully-passive as well as in semi-passive mode; a battery is used to support autonomous data logging when the on-chip RTC is required. In passive mode, a reader or NFC- enabled phone provides the time stamp instead, and the energy to support operation of the sensor is harvested from the reader’s field.

Logged sensor data are stored in the on-chip EEPROM and protected with passwords to preclude manipulation and unauthorized usage of the data. 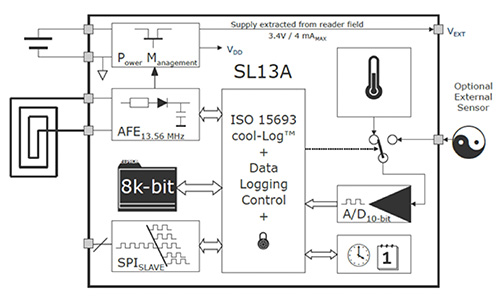 The SL13A can support a very wide variety of applications in which sensor data acquisition and wireless data transmission are required. These include:

Supply chain with shelf-life alert – the condition of goods in transit and storage, as well as environmental conditions, can be monitored and recorded by the SL13A. Perishable items such as food, beverages and medicines are subject to a temperature-dependent chemical reaction, which determines their shelf life. Some sensory tags include an algorithm for dynamically calculating the shelf life and provide an alert when the expiration date has been reached.

Building monitoring – an SL13A and appropriate sensors embedded inside structures such as buildings, bridges and viaducts can record conditions including temperature, humidity, pressure and vibration, and transmit the data when triggered by an NFC reader. Medication programs – dispensers and blister packs with integrated sensory tags can record and time-stamp the consumption of pills. This allows medical staff to monitor whether a patient has kept to their prescription.

Process control – in factory automation, sensory tags may control processes and their quality at each step of the process. This is more efficient than final quality assurance of the finished product.

Remote metering – SL13A sensory tags may be integrated into equipment with a wireless connection, such as WLAN or GSM, to extend the ability to track and monitor objects or environments in remote locations.

Implementing a proven communication protocol and providing an accurate and precise sensor interface, the SL13A demonstrates the new possibilities enabled by the integration of multiple electronic functions into a single device. The full range of applications of such a flexible device is, however, yet to be discovered – the imaginations of system designers will provide the best guide to the potential uses of this new class of sensory RFID tag.