The input section of a user interface is one of the most challenging, and least understood, aspects of a new product design.


The input section of a user interface is one of the most challenging, and least understood, aspects of a new product design. It is also one of the most frustrating aspects of the design to get right. If the input system is too simple, the user has to go through a complex dance to change the configuration. If the input system is too complex, then the cost of the unit is impacted and cuts into sales of the unit. If we choose the wrong type of buttons, we have problems with moisture, dust, and other contaminants. Even with the right buttons and the appropriate complexity, we still have to juggle board layout, button mechanics, and front panel design to get the buttons to line up properly with the front panel. In short, finding the right user input can make or break a new design, but getting it right is not a simple task.

The input system is important for product appeal, and has to support the complexity of the product’s features, while keeping costs down and hopefully keeping dust and other foreign substances out of the housing. How do we accomplish all that and still keep the development time realistic? Well, until recently this would have been a daunting task, requiring numerous tradeoffs between cost and functionality. However, with the introduction of Microchip’s new Metal over Capacitive (MoC) input system, we can create complex custom input systems with almost no impact on cost, contamination resistance, or development time.

The advantage of the MoC system is that we can now create as many sealed buttons as needed just by printing a button legend on the front panel. No cut outs in the panel, no mechanical push buttons, no stacked tolerances between the PCB/push buttons/front panel, just a simple system that uses the existing enclosure as the input system.


Note that the deflection in the target is exaggerated in Figure 1 for clarity. In a typical design, the deflection of the target is actually on the order of 10 to 15 micrometers, so metal fatigue is not an issue. In fact, the target need not be a solid metal plate. MoC works equally well on a plastic target with just a thin conductive layer of Mylar or silver ink on the back side. The metal on the target also does not have to have a hard connection to ground to operate. The target can be capacitively coupled to ground by putting a ground plane around the sensors, or the sensor can be split in half with half going to ground and the other half acting as the sensor. However, in noisy environments, a hard connection between the target and ground is preferable for protection from noise.

Another important aspect of the mechanical design is the spacing between the sensor and the target, typically on the order of 50 to 100 micrometers. This spacing is easy to achieve using a double sided adhesive, and provides between 10 to 20 percent shift in the capacitance of the sensor. This is typically sufficient for reliable detection of a user’s press, plus some margin for noise tolerance. Figure 2 shows how sensitivity is related to the spacing between the target and sensor. 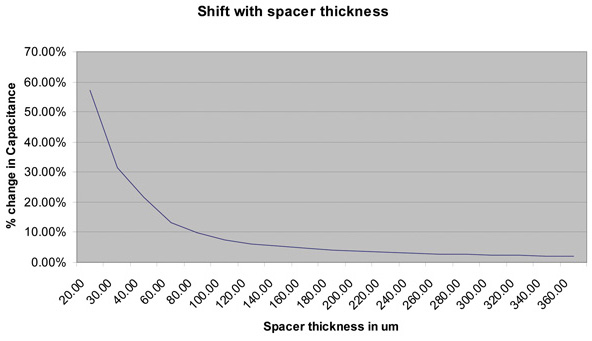 Figure 2: Shift versus thickness, given a 10 µm deflection of the target.


An important factor to remember is that not all material adheres well to the same adhesive. The reason is that differing materials have different surface energy ratings. If the wrong adhesive is used, then the spacing can change over time diminishing sensitivity, or the sensor could completely debond from the target with repeated presses by the user. Consulting with the adhesive distributor will provide insight into which adhesive is right for the job and provide information on the correct method for setting the adhesive once the target is in place under the target. 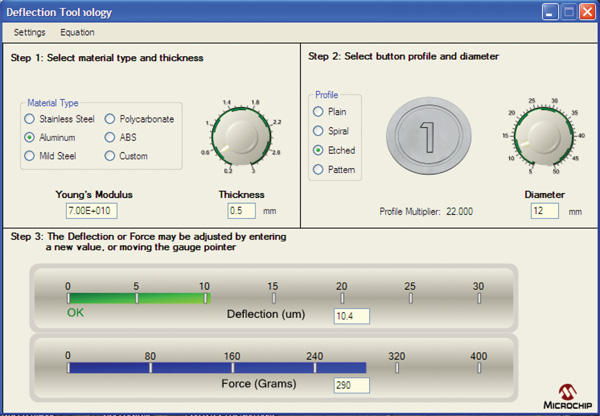 
Because MoC systems measure a shift in capacitance as a linear value and not a digital one, it is also possible to put two or more thresholds on a single button. This means users will finally be able to get a different response by pressing harder on the button. For example, a volume up button could increase the volume faster if the user presses harder on the button.

The previous discussion has established that the mechanical design is simpler and cheaper. What about the electrical interface and the software to drive it? Here is another example of how Microchip has made things easy for the designer: the electrical interface is either the CVD (capacitive voltage divider) system using a 10-bit ADC (analog to digital converter), or the CTMU (charge time measurement unit) plus an ADC. Both work equally well, you just have to pick a microcontroller with the additional peripherals that you need and then use whichever system is available on that microcontroller. The only external components required are the bypass capacitor on the microcontroller power supply, and a series 4.7 KΩ resistor for each sensor on the CVD system (Fig. 4). 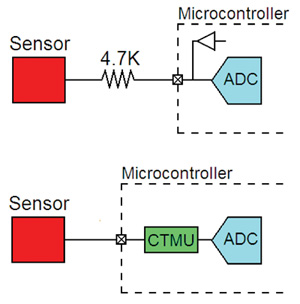 
The software for the system is a configurable prewritten package, so the designer does not have to develop their software from scratch. Basically, the designer configures the package via a header file in which the number of sensors, which inputs are associated with the sensor, press thresholds, and a host of other features are specified. The software system also includes additional functions needed for handling system noise, although a MoC system is largely immune to noise because the sensor is essentially surrounded by a Faraday cage. Just remember that if the target over the sensor is not hard grounded, you may have to enable some of the noise rejection features to handle any conducted noise problems that may creep in.

A useful option within the software is the ability to define sliders. Sliders are two or more sensors combined to create a variable adjustment similar to linear potentiometers. All the user has to do is press anywhere between the two extremes on the slider, and the software provides a proportional value corresponding to the position of the user’s finger. This feature is particularly useful for systems that have volume/speed/intensity adjustments in that it gives the user an intuitive knob to adjust in place of a display with up/down buttons (Fig. 5). 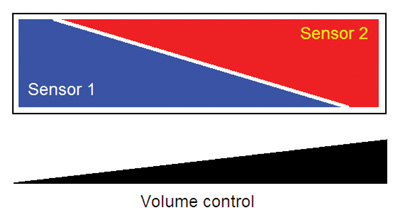 Figure 5: Example of a slider implementation with legend.


Both systems also include functions that allow the designer to link the MoC software system to a PC based GUI for evaluation, testing, and tuning of the software. This is particularly useful when initially getting the system up and running because it allows you to both visually view what is happening during a user press, and also gather hard numbers for determining the appropriate detection thresholds for the system. The physical link between the MoC software and the GUI is configurable, allowing both I2C and serial communications. Some versions of the MoC /GUI software also allow the dynamic tuning of the touch detection thresholds while the system is operating (Fig. 6). 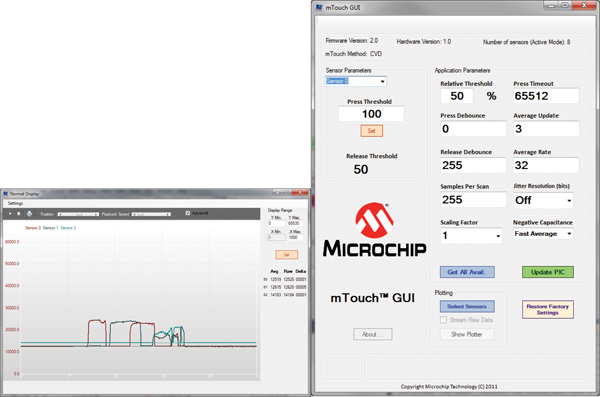 
The final point to consider about a MoC system is backlighting of the button legends. That’s right, we can actually backlight a metal button. There are several ways to accomplish this; The only real challenge in backlighting is getting the right number of LEDs and the right light diffuser material to prevent hot spots in the legend. However, after consulting with a printing house, even this problem is not insurmountable; after all, the printers have been backlighting legends for a long time and should know all the tricks required to get the image properly illuminated.

So, by using MoC, we can create as many buttons as we want, we can use either a plastic or metal front panel, we do not have to cut any holes in the front panel, we can make the buttons any shape we want, and we can even vary the force required to press the buttons. On top of that, we no longer have to worry about moisture, dust, and other contaminants; the detection software is already written for us; we can have buttons/sliders/multiple threshold buttons; and the only thing we need to do is find the right adhesive to glue the PCB to the front panel. Sounds like designing the input half of our user interface just became a whole lot easier. That only leaves choosing the proper microcontroller for your application. Most PIC32X microcontrollers will satisfy your MoC system’s requirements. See Microchip’s website to verify your choice.