The first Power-over-Ethernet (PoE) standard, IEEE 802.3af, was intended for systems supplying up to 15.4 WDC at the powered device (after taking into account losses in the cable run).

PoE+ is increasing in popularity because the extra power-handling capacity allows engineers to do much more than the original standard allowed. Silicon vendors have reacted by introducing components for PoE applications that can cope with the extra demand of PoE+. For example, PoE+ systems employ Power Sourcing Equipment (PSE) controllers that manage input power to the Ethernet cable and also integrate the voltage regulator required to convert the input voltage to that required by the PoE+ system.

This article explains how the introduction of these monolithic PSE controllers ¬¬– designed to handle the higher power demands of PoE+ – has made implementing the technology even easier, and then leads on to describe some of the latest product from major suppliers.

Perhaps the biggest benefit of PoE is its simplicity. The technology uses a single standard RJ45 connector (Figure 1) and CAT 5 (or even CAT 3) cable and can handle tens of watts – so once installed for communication, it can be used for power as well. That saves on materials, labor, installation time, and ongoing maintenance costs. Moreover, the centralized and flexible nature of the technology eliminates the need for each powered device (PD) on the network to have its own local power supply. That allows PDs to be placed anywhere and be easily relocated later if required. 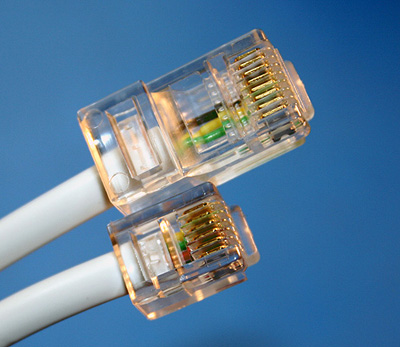 
PoE+’s power-carrying capacity means it can power equipment such as cameras, wireless LAN access points, remote Ethernet switches, embedded computers, thin clients, LCDs, and IP phones. PoE is superior to USB for these applications because it can carry more power over longer runs.

PoE can supply 15.4 WDC at the PD, which is a lot when compared to USB 3.0’s 900 mA. However, some devices that could benefit from PoE require more power that a 15.4 W system can supply (for example, cameras with pan, tilt, and zoom capabilities). That’s where PoE+ comes in. PoE+ is covered by an additional IEEE standard, IEEE 802.3at, and can supply up to 25.5 WDC to the PD. The PSE provides 50 to 57 VDC compared to 44 to 57 VDC for PoE. And current for PoE+ is increased to 600 mA compared to the earlier technology’s 350 mA.¹ (See the TechZone article “Power-over-Ethernet Adapts to Meet Higher Demand”.)

Endspans are normally used on new installations or when the switch has to be replaced as part of an upgrade to PoE+. Midspans are used when the network is being upgraded to PoE+ but the existing Ethernet switches are retained.

PoE+’s simplicity makes it relatively easy to set up. For example, the standard provides for signaling between the PSE and PD to allow the former to detect devices on the network and then determine the amount of power required or available.

A PD then obtains its power from a PSE. Examples of PDs include wireless access points, IP phones, and IP cameras. Many PDs also have an auxiliary power connector for an optional, external, power supply. Depending on the PD design, some, none, or all power can be supplied from the auxiliary port that can also supply backup power in case of Ethernet network failure.²

Traditionally, PSEs incorporated discrete circuitry divided into the communication interface between the power supply and Ethernet network, and the power supply itself. But to make implementation even easier, the silicon vendors have brought out a range of integrated PSE controllers to optimize the operation of a PoE+ installation.

These controllers reduce the complexity and number of external components that are required for PoE+ equipment by combining the PoE+ interface circuitry with the linear regulator or switching power supply that converts the supply voltage to the 50 to 57 VDC suitable for the Ethernet cable.

A new generation of PSE controllers

A good example of this new generation of PSE controllers capable of handling the higher power of PoE+ is Maxim’s MAX5952. This chip is designed for use with IEEE 802.3at-compatible PSE. The device provides PD discovery, classification, current limit, and DC and AC load disconnect detections in compliance with the standard.

The MAX5952 features high-power mode that provides up to 45 W per port and incorporates an overcurrent detection function that enables the system power management to detect if a PD draws more than the allowable current.

The device provides four operating modes to suit different system requirements. Auto mode allows the automatic operation without any software supervision. Semi-automatic mode automatically detects and classifies a device connected to a port after initial software activation, but does not power up that port until instructed to by software. Manual mode allows total software control of the device and is useful for system diagnostics. Shutdown mode terminates all activities and securely turns off power to the ports.


For its part, Microsemi supplies the PD69104B PoE+ controller that can be used for by endspans and midspans. The device is a four-port mixed-signal high-voltage PoE+ controller supporting three modes of operation: Extended auto, auto, and semi auto.

The PD69104B can support legacy/pre-standard PD devices and provides PD real-time protection through overload, underload, overvoltage, overtemperature, and short-circuit mechanisms. The device supports supply voltages between 44 and 57 V with no requirement for additional power supply sources and has built-in thermal protection.

The enhanced PoE standard, PoE+, allows Ethernet cable to carry greater power and hence extends the range of PDs that can be connected to a network. This allows engineers to use this simple-to-implement technology for communication and power for a range of applications that previously demanded more power than conventional PoE could handle. A popular example of such an application is security where PoE+ can now be used to power tilt, pan, and zoom operations of networked cameras.

Major silicon suppliers have made implementing PoE+ even easier by supplying PSE controllers. These devices integrate PoE+ interfaces and power supplies into a single chip. For more information about the examples described in this article, use the links provided to access product pages on the Hotenda website.