New and Notable Parts and Technologies at APEC 2013

A listing of some of the new products revealed at APEC (Applied Power Electronics Conference and Exposition). Suppliers include Cree, AVX, ON Semi and more.


The Applied Power Electronics Conference and Exposition (APEC), the best known event in power electronics, was held in the Long Beach, CA, Convention Center from March 17 to 21, 2013. APEC 2013 continued its long-standing tradition of addressing issues of immediate and long-term interest to the practicing power electronics engineer. This is the event engineers attend to upgrade their knowledge of AC/DC and DC/DC power, motor drives, inverters, LED drivers, and UPS equipment. Following, listed alphabetically, is a sampling of suppliers that introduced new products at the show. 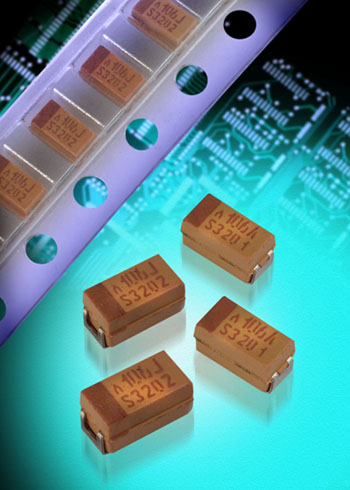 Figure 1: The AVX TCJ series of tantalum polymer capacitors with up to 125 V ratings.

Cree introduced the C2M0080120D 20 A, second generation, 1,200 V SiC MOSFET (Figure 2), and CPM2-1200-0025B 50 A models that are said to deliver twice the amps per dollar. They are targeting the devices for applications including solar circuits, motor drives, and UPS systems. The higher frequency of the SiC devices enables smaller components and that improves the cost-performance trade-off. The performance of these SiC MOSFETs enables the reduction of required current rating by 50 to 70 percent in some high-power applications. When these MOSFETs are properly optimized, customers can now get the performance benefits of SiC with the same or lower systems cost as with previous silicon solutions. For solar inverters and UPS systems, the efficiency improvement is accompanied by size and weight reductions. In motor drive applications, the power density can be more than doubled while increasing efficiency and providing up to twice the maximum torque of similarly rated silicon solutions. The product offering range has been extended to include a much larger 25 mΩ die aimed at the higher power module market for power levels above 30 kW. The 80 mΩ device is intended as a lower cost, higher performance upgrade to the first-generation MOSFET. Die are available with ratings of 25 mΩ, intended as a 50 A building block for high-power modules. The 80 mΩ MOSFET in a TO-247 package is intended as a higher-performance, lower-cost replacement for Cree’s first-generation CMF20120D. 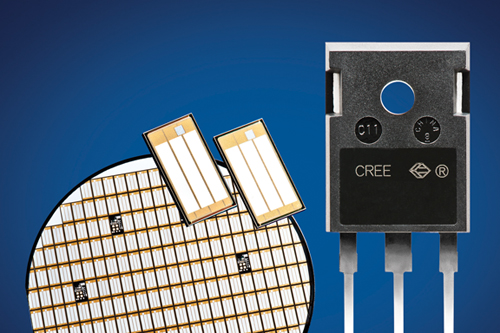 Fairchild Semiconductor displayed SiC drivers, GaN devices, and high-power density modules, including the FCM8531 (Figure 3), a three-phase hybrid motor controller for the booming brushless DC motors market. Many companies are developing motor controls because there is a big market everywhere for these devices, particularly in developing countries, where motors represent as much as 70 percent of industrial energy used. The FCMN8531 is an integrated solution with development tools and advanced motor control libraries to help speed time to market. It integrates a configurable processing core, embedded MCU, and motor control.

Fairchild, like many other companies, is also developing products based on SiC because of its wide band gap (3x larger than Si), a breakdown field that is 10x that of Si, a thermal conductivity that is 3x Si, and a temperature stability that is 3x higher than Si. What that all means is when transistors are made with SiC you get efficiency > 98 percent, > 300 A/cm2, and < 20 ns switching speeds. The downside has always been device cost; it is more expensive than Si. That singular cost, however, does not take into account lower system cost because of the higher power density, smaller cooling needs and increased power output for the same hardware, as well as a cost reduction because of fewer passive components (inductors and capacitors).

Infineon showed its Rapid 1 and Rapid 2 fast recovery 650 V diode families that use the company’s ultrathin wafer manufacturing technology. The parts complement Infineon’s existing high-power 600 V and 650 V diodes by filling the gap between SiC diodes and emitter-controlled diodes to address the ultrafast and hyper-fast power silicon diode markets. The Rapid 1 diode family has a 1.35 V temperature-stable forward voltage (VF) to ensure low conduction losses and provide a soft recovery to keep EMI emissions to a minimum. The family suits power factor correction topologies, typically found in major home appliances, such as air conditioners and washing machines, as well as boost stages in photovoltaic inverters, which are switching between 18 and 40 kHz. The Rapid 2 diode family is designed for applications switching between 40 kHz and 100 kHz. It offers both low reverse-recovery charge and reverse-recovery time (trr < 50 ns). Rapid 2 is targeted at PFC stages found in servers, telecom rectifiers, TV and laptop power adapters, and welding machines.

International Rectifier’s IR3847 (Figure 4) is a single-chip PoL, 25 A voltage regulator that targets base stations, data centers, and high-definition set-top boxes. The IR3847 can operate at 25 A without a heatsink, and reduces the PCB size by 20 percent compared to alternative integrated solutions and 70 percent compared to discrete solutions. It features a built-in LDO for single Rail operation from 5 to 21 V, a remote sense amplifier with differential voltage sense that eliminates parasitic voltage drops, a programmable switching frequency up to 1.5 MHz, and thermal shutdown, overvoltage, UVLO, and OCP. 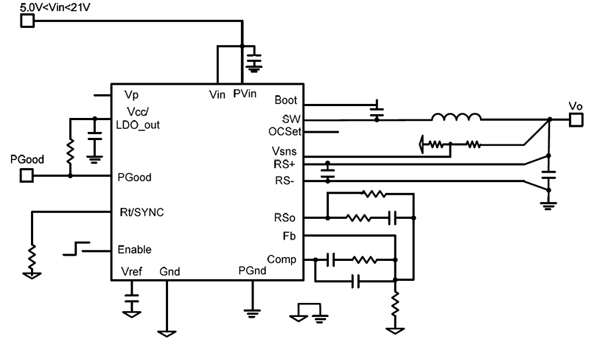 Figure 4: The International Rectifier IR3847 is a single-chip PoL 25 A voltage regulator for base stations, data centers, and high-definition set-top boxes.

Intersil introduced its latest version of the PowerNavigator digital design system as well as the ZL8101 digital power management solution. The company also featured its new ISL8225M dual 15 A power module in a multiphase current-sharing demonstration capable of delivering up to 90 A output current with no fans or heatsinks. The ZL8101 is an adaptive digital DC/DC PWM controller with auto compensation that provides a single buck output with currents up to 50 A. Designed to work with an external driver and with DrMOS solutions, it can be used as a flexible building block for 12 and 5 V down conversion or paralleled for current sharing with multiple ZL8101 devices in high-current designs.

Maxim is now sampling the 78M6610+PSU / 78M6610+LMU single-phase energy-measurement processors. These processors are an energy-measurement subsystem in a single chip. They provide simple utility-grade sensing and diagnostics for existing designs without the traditional cost of a utility meter system-on-chip. Both devices contain unique firmware to meet end application requirements. The 78M6610+PSU is specifically designed for real-time monitoring of data centers, servers, and telecom and data equipment, while the 78M6610+LMU is a more general-purpose solution for applications such as white-good appliances, smart plugs, EV chargers, and solar inverters. 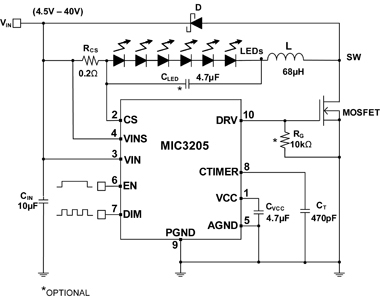 ON Semiconductor presented the LV5980MC, a 3 A step down DC/DC converter IC that improves conversion efficiency at light load. In consumer electronics designs, the device can reduce energy consumption during standby mode. It regulates input voltages from 4.5 to 23 V down to an output voltage as low as 1.235 V. The device also includes an internally fixed switching frequency of 370 kHz, high-side MOSFET of 100 mΩ and can supply up to 3.0 A of load current.

Power Integrations featured the PI Expert Suite 9.0 (Figure 6), which includes an enhanced schematics-manipulation tool. It enables designers to upload the resulting BOM from the auto-generated schematic layout to design-fulfillment distributors. It improves the productivity of power supply design teams by greatly reducing the time to first prototype and by slashing the number of prototype iterations required to reach a finished product. The software now includes support for solid-state-lighting products, enabling LED designs to be optimized for CC, dimming and harmonic emissions. A heatsink calculation tool provides the designer with an estimation of the thermal design requirements for a new power supply, which may be used to guide layout and mechanical prototyping decisions. 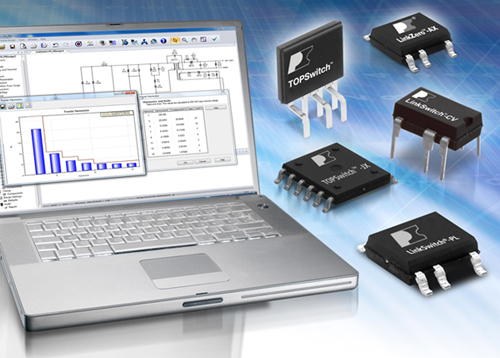 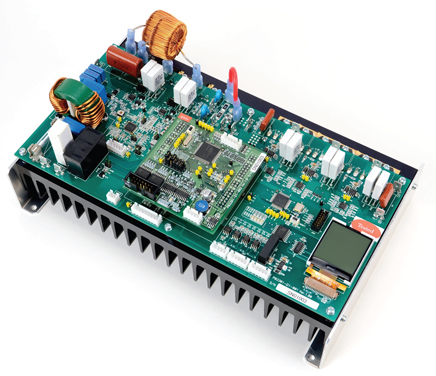 Texas Instruments showed several products including the UCD3138064 digital power controller, a PFC development kit based on C2000 Piccolo microcontroller, a digital power workshop kit, three synchronous boost controllers, and AC/DC controller, a reconfigurable DC-arc detect reference evaluation kit, and packaging advancements for power designs. The programmable DC arc detect reference solution is a timely product given the recent news of Li-ion battery fires on the Boeing 787. TI introduced the RD-195, which addresses a growing need to safeguard high-power DC systems, such as automobile and aircraft battery management systems, industrial factory equipment, and photovoltaic units, against the catastrophic damage that can result from arc faults. The RD-195 detects different types of arcs, including series, parallel, and ground arcs. It is designed to operate in noisy environments with RF interference. Designers can program the RD-195 to optimize the balance between arc-detection accuracy and false detection prevention to meet their system needs. The RD-195 is accompanied by a software application tool that enables alteration of threshold detection parameters. 1,000 V isolation, detection at maximum DC string current of 15 A, a simple LED arc detection flag, self-test capability, industrial temperature range from -40° to +85°C, a PCB footprint of 50 x 30 mm, single sided, and a power requirement of < 400 mW, and analog power < 50 mW. 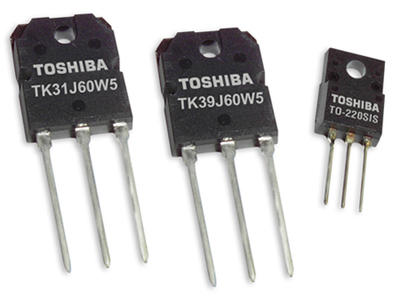 Vicor featured a conduction-cooled MicroPAC power system that incorporates VI Chip BCM bus converters and is suited for distributed power architectures, providing up to 1,300 W of continuous power at up to 92 percent efficiency and 25 Win.3 power density in a 4 x 1.72 x 7.45-in. package. It supports an 85 to 264 VAC input range and offers semi-regulated output voltages of 12, 14, 24, 28, 36, and 48 VDC via four factory-configurable isolated outputs. System designers seeking the flexibility to partition multiple voltage outputs rather than use two separate power supplies can configure MicroPACs with a combination of four high-performance BCM high-voltage bus converters. The power supply base plate is designed to attach to heatsinking surfaces, eliminating the need for fans or forced air cooling and enabling system designers to employ sealed enclosures to protect against moisture and particulate ingress.

Vishay introduced the VCUT05D1-SD0 ESD protection diodes. The E series 600 V power MOSFETs (Figure 9) feature 17 new devices in eight packages that extend the on-resistance range of the family from 39 to 600 mΩ at 10 V, and broaden its maximum current ratings from 7 A to 73 A. The series is based on Vishay’s next generation of super-junction technology, and enables the company to enter additional markets using power conversion technology, including lighting, adapters and high-power renewable systems. 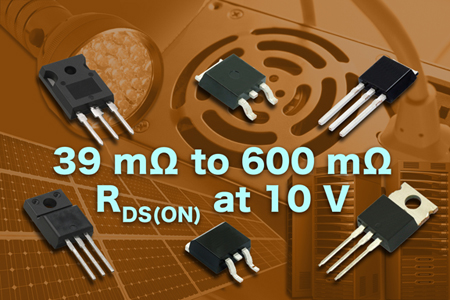 Figure 9: Vishay offers the E series 600 V power MOSFETs, introducing 17 new devices in eight packages that extend the on-resistance range of the family from 39 mΩ to 600 mΩ at 10 V.

The company also displayed the ThunderFET, TrenchFET generation IV, and the Si7655DN generation III p-channel MOSFET. The n-channel TrenchFET power MOSFET in the thermally enhanced PowerPAK SO-8 package extends the ThunderFET technology to 150 V. The SiR872ADP offers on-resistance of 18 mΩ at 10 V and 23 mΩ at 7.5 V, while maintaining 31 nC gate charge at 10 V and 22.8 nC typical at 7.5 V. The Si7655DN is the industry’s first −20 V p-channel MOSFET in a 3.3 x 3.3 mm package to offer on-resistance of 4.8 mΩ maximum at a 4.5 V gate drive.