Evidence was plentiful throughout the four-day 2013 Mobile World Congress (MWC) in Barcelona, Spain, that the world’s wireless mobile ecosystem continues to expand without abeyance.


Evidence was plentiful throughout the four-day 2013 Mobile World Congress (MWC) in Barcelona, Spain, that the world’s wireless mobile ecosystem continues to expand without abeyance. New advancements were announced, displayed, and demonstrated in mobile devices, product ICs, and wireless technologies such as contactless payments using Near Field Communications. Let’s begin with developments in NFC.

Attendees in Barcelona were able to experience NFC first hand, starting with dedicated NFC badge lanes at the conference entrances. In addition, for attendees in possession of an NFC-capable handset the event showcased an integrated range of mobile NFC services both at the Mobile World Congress venue and in the city of Barcelona. For the first time, NFC touch points were placed throughout the exhibition floor, making it easy to get information as well as a variety of exhibitor offers and important downloads.

Semiconductor manufacturers participated in the NFC showcase by trotting out their latest components. NXP Semiconductors, for example, demonstrated its NFC solutions for office, home, retail, and smart city environments. One of these solutions is what the company calls MIFARE4MOBILE, which is an advanced mobile ticketing solution that allows NFC-enabled phones to be used for contactless ticketing applications on more than 650 transport systems around the world, via the company’s MIFARE technology. Hotenda offers a variety of MIFARE products on its website such as the PN544 NXP NFC controller featuring simultaneous multi-card management (ISO14443-A,B,B’, MIFARE) for mobile phones and portable equipment. The controller complies with all released NFC and ETSI/SCP SWP and HCI standards, guarantees interoperability with existing infrastructure, and provides a flexible platform for meeting GSMA requirements in next-generation NFC-enabled devices and services. It also offers fully-host-controllable power states, delivers a small footprint of 4.5 x 4.5 x 0.8 mm, and supports multiple secure elements.

With rapid expansion of the worldwide mobile spectrum, there is demand for analog semiconductor solutions that can handle more than 20 cellular frequency bands in addition to Wi-Fi and Bluetooth. The key elements in designs aimed at solving these challenges are antenna diversity and antenna tuning. Antenna diversity is a means for improving RF transmission performance, while antenna tuning enhances cellular operator’s available spectrum. At MWC, Skyworks announced its new antenna-tuning solutions, such as the forthcoming SKY13448-001 SPDT LTE/WCDMA/GSM transmit switch, which is controlled by an integrated general-purpose input/output interface with a control pin. This high-power, linear 0.1 to 3.0 GHz device is useful for switching coexistence notch filters for tuning antenna performance. It is offered in an 8-bump, 1.1 x 1.1 x 0.36 mm wafer-level chip-scale package.

Currently Skyworks offers a variety of switch SPDT WCDMA/GSM solutions in the Hotenda online catalog, one of which is the SKY13286-359LF (Figure 1) 0.1 to 6.0 GHz high-isolation absorptive switch for GSM/WCDMA base-station applications. At MWC, Skyworks also debuted its SKY13396-397LF CMOS silicon-on-insulator DPDT switch as well as its SKY19001-001 single-pole single-throw aperture-tuning field-effect transistor switch. 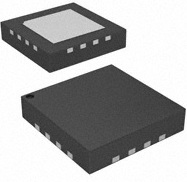 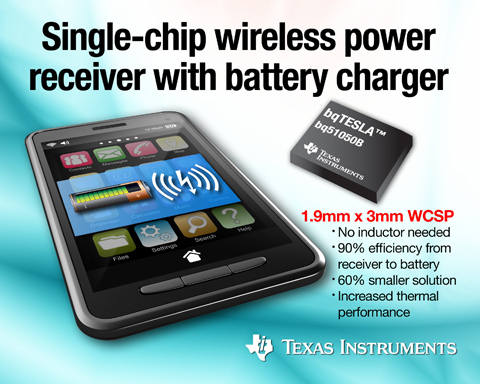 
TI also announced that it will create products that support both Qi and the Power Matters Alliance wireless-charging specification. TI’s first multimode solutions are expected later this year.

An LTE antenna with 9 bands 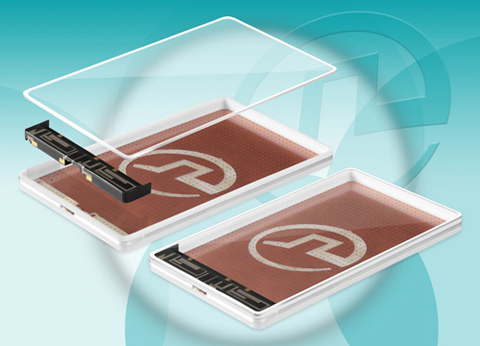 
The configuration houses the antennas in a metal chassis with a dielectric antenna carrier and antenna volume of 10 x 74 x 5 mm, including USB, and with a minimum ground clearance on the printed-circuit board of two times 30 x 8 mm for the two antennas together. The primary and secondary antennas are located at the bottom end and on the side of the device, increasing the number of operating bands at the same end of the device. No additional space is needed for antennas, enabling more freedom of design. Frequency bands for both antennas are a low band of 698 to 960 MHz and high bands of 1,710 to 2,170 MHz and 2,500 to 2,690 MHz. The low-band envelope correlation coefficient (ECC) is below 0.5. This antenna has a minimized hand-effect so if the user's hand is covering one antenna, transmission is switched to the other antenna (2PDT switch). There are equal transmission line lengths from engine to antenna, so there are equal losses from the line. As it's a modular system, there are numerous integration possibilities.

Pulse Electronics offers a variety of 1-to 6-band antennas on the Hotenda website, where you can apply filter parameters (such as antenna type, number of bands, VSWR, gain, and termination) to better meet your design specifications.

White space is license-exempt radio spectrum that exists between licensed TV transmissions. Globally, more than 100 MHz of prime UHF white space radio spectrum exists in many rural locations and it is characterized by excellent propagation characteristics ideal for long-range communication. Enabled by the right multicore SoC and RF solutions, the spectrum can be used to deliver data at high speeds across a distance of many miles. White space spectrum is ideal for providing fixed broadband Internet services to locations where the routing of cables or optical fiber is neither practical nor economical.

MWC continues to be an important industry show where manufacturers, consumers, developers, and designers come together to share, learn, and develop new solutions — some of which may change the landscape of mobile electronics. Engineers can also count on getting the latest industry news as well as network with their peers, exchange technical concepts and ideas, and perhaps also solve issues that have been vexing them in recent projects. MWC 2014 will take place 24-27 February 2014, again in Barcelona.