Personal-area networks (PAN) – very short-range networks spanning distances of typically less than two meters – are proliferating as more and more personal electronic products link to cell phones and to each other.


Personal-area networks (PAN) – very short-range networks spanning distances of typically less than two meters – are proliferating as more and more personal electronic products link to cell phones and to each other. The latest trends in personal fitness and wearable medical accessories that are used to monitor activity and collect data add to the need for short-range, reliable, and inexpensive PAN solutions. Sometimes referred to as “body-area networks”, these short-range communication solutions leverage various wireless radio standards such as Bluetooth (IEEE 802.15), Bluetooth low-energy, ZigBee, Wi-Fi (802.11), Near Field Communications (NFC), RFID, and other proprietary interfaces based on protocols such as OOK (on-off-keying), FSK (frequency-shift keying), and ASK (amplitude-shift keying).

Whether the wireless PAN (WPAN) is focused on just your body or a slightly larger area such as an office cubical or a small room, perhaps up to 10 meters, the distance in most cases can be determined by the radiated power from the transmit portion of the transceiver. Thus, a WPAN could interconnect all the typical computing and communication devices that we have in our pockets or on desktops – or it could serve a more dedicated purpose such as allowing a surgeon and his team to communicate during an operation and also monitor the patient without a large jumble of wires (Fig. 1). 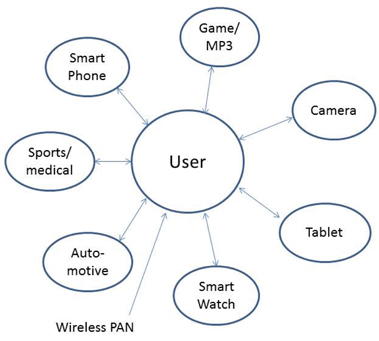 Figure 1: This simplistic view of a wireless personal area network shows some of the basic ways various devices will link together “turning” the user into the network hub. Devices can either communicate directly to the user or intercommunicate with each other through the WPAN.

WPANs are not a new concept – they have been discussed and implemented for almost three decades. However, in the last few years, the high level of integration and low power consumption of the ICs used to implement the transceivers and protocols has made the WPAN much more economically practical. The IEEE has also been developing various standards to help define potential WPAN implementations. For instance, the IEEE Std. 802.15.1-2002 defines a WPAN based on Bluetooth v1.1, which includes a specification and descriptive language model for an integrated Bluetooth media-access control sublayer. Another IEEE group (P802.15.3) was chartered to draft a high-data-rate WPAN that transfers data at 20 Mbits/s and higher.

One essential element of these networks is that they must be easy to set up without requiring cumbersome password entry or complex procedures to link devices together to form the WPAN. By coupling short-range NFC links with a Bluetooth or another wireless interface, the NFC link can be used to authenticate a connection, eliminating the need for password entry. NFC is already well established in the smartphone market, with many models already incorporating an NFC transceiver in the phone. A simple tap of the NFC enabled smartphone to another NFC-enabled device will provide the authentication needed to link the two devices so they can communicate with each other. At the same time, the NFC authentication prevents unauthorized devices from linking in, thus eliminating interference or “snooping” by undesired devices.

The NFC link typically provides contactless communication at distances of up to about 4 or 5 centimeters, although the links can operate at distances of up to about 20 cm. The short distances also make the link inherently secure since it would be difficult for someone to link to another device that is in a pocket or held in the hand unless the user actually intends to link up. NFC systems can transfer data at three specific speeds – 106, 212, or 424 kbps. The application itself will set up the initial communication speed, but the application running on the system can change the data rate based on system requirements and environmental conditions.

Part of the NFC standard defines two different modes of operation for the link: an active mode in which both devices in a link generate an RF signal that carries the data, and a passive mode in which only one NFC device generates an RF signal. The passive device employs a scheme called load modulation to transfer data back to the device generating the RF signal (the primary device, or initiator). The two operating modes also include three communication modes that help define the applications for which the NFC-based device will be best suited. These include Read/Write mode that allows applications to transfer data using an NFC Forum specified message format, a NFC card emulation mode that allows the card to behave like a Smartcard, employing a secure data-transfer mode, and third, a peer-to-peer mode that supports a device-to-device link-level communications capability.

In addition to the NFC links, many systems have leveraged the popular Bluetooth wireless interface for functions such as headsets, speaker systems, athletic equipment (smart sneakers, chestbands to measure breathing, etc.), and medical devices such as pulse oximeters, hearing aids, weight scales, and many other functions.

The original Bluetooth standard has evolved into two main camps. The traditional Bluetooth standard operates at 2.4 GHz and handles data rates high enough to stream MP3-class audio data. A lower-power version referred to as Bluetooth low energy (BTLE) has also emerged. This new standard drastically reduces the power consumption of the Bluetooth transceiver so that subsystems can be powered for a month or more on a single battery. To get the long battery life, designers cut back the data rate, The BTLE devices have data rates of 250, 40, or 20 kbits/s using 16 channels in the 2.4 GHz ISM band, 10 channels in the 915 MH band, and one channel in the 868 MHz band, respectively. Conversely, Bluetooth 2.1 devices can transfer data at rates approaching 500 kbits/s using the 2.4 GHz ISM band.

Bluetooth pairing usually involves some level of user interaction to confirm the identity of the user or the devices themselves. There are many pairing mechanisms available across the various versions of Bluetooth. This process is typically lengthy and sometimes confusing to the user, and engineers have had success implementing a simplified pairing method using a microcontroller and an NFC transceiver IC. Vendors’ solutions offer on-chip encoders, decoders, data framing and protocol handling circuitry, some with integrated microcontrollers and others that just offer RF front ends so that designers can add their own microcontroller to handle the data transfer and protocols. For example, for secure pairing (Bluetooth, Wi-Fi, or other paired wireless networks) Texas Instruments offers its MSP430F5529 low power MCU, a TRF7970A NFC transceiver IC and a CC2560 TI Bluetooth radio IC.

The TI TRF7970ARHBT is an integrated analog front end and data-framing device for a 13.56 MHz RFID/Near Field Communication system. Built-in programming options make it suitable for a wide range of applications for proximity and vicinity identification systems. It can perform in one of three modes: RFID/NFC Reader, NFC Peer, or in Card Emulation mode. The part is configured by selecting the desired protocol in the control registers. Direct access to all control registers allows fine-tuning of various reader parameters as needed.

Also suitable for Bluetooth and Wi-Fi pairing the ams AS3953 NFC interface IC is an analog front-end with integrated ISO14443A (the international standard that defines proximity cards used for identification and the transmission protocols for communicating with it) data framing and an SPI interface. It is designed to create a fast data link between an ISO 14443A reader device (PCD) and a microcontroller. The AS3953 is passively powered meaning that it can be supplied from the PCD magnetic field, eliminating the need of a continual external supply. A demo board for AS3953 (Fig. 2) also is available. 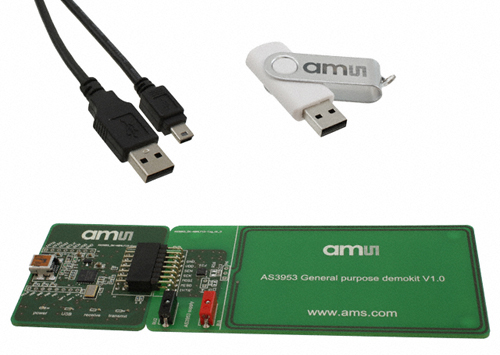 Figure 2: AS3953 DK Demo Board for the ams AS3953 NFC interface IC, an analog front-end with integrated 14443A data framing and SPI Interface.

The car has become a major opportunity for PANs since it is quickly becoming an entertainment and communications hub, incorporating Bluetooth, Wi-Fi, and cell-phone radios that link to the passengers and to the devices that the passengers bring into the vehicle. As far back as the 1980s, experts predicted that the car would become a “mobile browser”, allowing passengers and vehicles to communicate, providing new opportunities and improved safety. Bluetooth has already been incorporated into many mid-priced and higher-end cars to provide links to cell phones and MP3 players, as well as to home networks when the car is parked in the garage, allowing users to update playlists for the next trip.

To help engineers with their Bluetooth PAN designs BlueRadio’s nBlue BR-EVAL-LE4.0-S2A evaluation kit provides a ready-to-use SoC Module compliant to the Bluetooth v4.0 Single Mode Low Energy protocol with code space available for custom applications. Kit models are available with and without an antenna. Features include long-distance communication due to high RX sensitivity, a real time clock and UART, SPI and USB interfaces for various applications.

As mentioned earlier, generic wireless interfaces such as ASK, OOK, and FSK are also popular since many WPANs do not require complex communication protocols to transfer data over short distances. One such solution is the MRF89XA developed by Microchip. On a single chip, the company integrated a half-duplex sub-GHz transceiver that supports either FSK or OOK operating modes (Fig. 3). Targeted at low cost, low-data-rate (sub 200 kbits/s) applications, the chip operates in the 863-870 MHz band, the 902-928 MHz license-free ISM band, or the 950-960 MHz band. It consumes just 3 mA in the receive mode and just 100 nA in sleep mode. A complete subsystem consists of the chip, a 12.8 MHz crystal, a SAW filter, and a low-cost microcontroller. 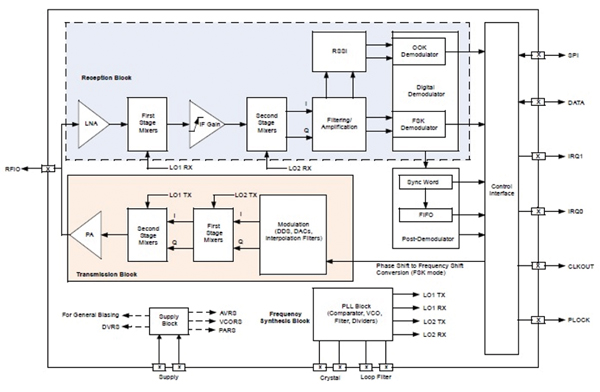 Figure 3: A fully integrated, half-duplex transceiver, the MRF89xa from Microchip can transmit data using either FSK or OOK modulation (Photo courtesy of Microchip).

Which WPAN approach a designer selects depends on many factors – budget, power, distance required, level of integration, protocol complexity, security, and still other factors. There are also many choices available from the IC vendors, with more coming almost every month, thus making the selection process even more difficult. Happily, however, with the wide variety of integrated solutions and choice of protocols at their disposal designers should be able to create an optimized solution.