However, NOR flash prices will drop 16% on average in 2013 as the NOR market shrinks. 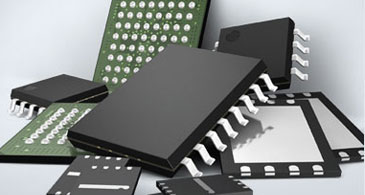 Buyers can expect mostly flat prices for NAND flash memory for the rest of the year as memory IC manufacturers have no plans to increase NAND flash capacity significantly.

Unit demand for NAND flash will increase 12% in 2013, following an 11% rise in 2012, according to researcher IC Insights. Robust demand and mostly stable average selling prices (ASPs) mean that the NAND flash memory market will increase 12% to $30 billion in 2013, from $26.8 billion in 2012, the researcher says. By 2017 the NAND flash market will total $51.7 billion dollars. However, it is a different scenario for NOR flash. The NOR flash market will decline through 2017 as prices erode.

The NAND flash memory market is growing because demand for electronics equipment is using flash memory and the sheer amount of flash in the devices is increasing, says Brian Matas, vice president of market research for IC Insights, based in Scottsdale, Ariz. He notes that smart phones, media tablets, smart televisions and portable electronics equipment all use flash. NAND is used in those devices to store photos, video, music and other data. 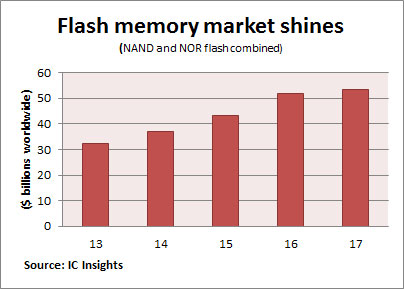 Flash is also being used in servers in large data centers or "server farms," replacing hard disk drives, says Matas. “They are using NAND as a solid-state drive. It runs cooler than hard drives and uses less electricity and is faster and probably a little bit more reliable than hard disk drives," he says.

Matas notes that while flash memory is a little more expensive than hard drives, in the long run the cost is lower because it uses less power and runs cooler. That means less air conditioning is needed to keep servers cool in large data centers where hundreds of servers are housed, says Matas.

Although NAND flash memory demand continues to increase, suppliers are not building new fabs or increasing manufacturing capacity to any great extent, although they are making capital expenditures, according to Matas.

By shrinking the line widths of the chips, manufacturers can reduce the power needed for the chip, reduce cost, get more chips per wafer and boost densities.

Memory IC manufacturers have been able to increase manufacturing efficiencies so prices have declined in recent years. “But in 2013, we see a little more flat ASPs," says Matas. "A lot of that has to do with capacity.” 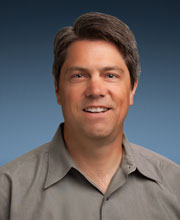 He notes the industry may be getting more gigabytes for wafer because NAND flash memory makers are shrinking the lithography of wafers, but there were no new fabs built in 2012 and none are planned for 2013.

“This translates to price stability. With demand increasing at a rate that we are barely able to keep up pricing will be stable,” he said.

Kilbuck says price stability is healthy for the industry because it means that flash manufacturers can invest in new products and processes, which will benefit customers. With healthy prices, suppliers can improve manufacturing efficiencies and “lower cost and pass those cost savings onto customers. It’s a win-win market dynamic for the foreseeable future,” says Kilbuck.

He adds that right now prices are volatile for NAND chips for high-volume applications such as consumer electronics equipment. “Prices fluctuate, sometimes daily," especially on the spot market, says Kilbuck.

While the NAND flash market is growing, demand for NOR flash memory continues to decline and so are prices. The average selling price for a NOR chip is expected to fall 16% this year and about 12% in 2014, according to IC Insights.

NOR is used for code storage in electronics equipment, such as the basic input-output system (BIOs) in computers. It is also used in lower-end cell phones, electronic automotive systems, test and measurement equipment and factory automation equipment.

While the NOR market has declined, NOR flash continues to be used in many applications and will continue to be used for years.

In fact, unit shipments will increase about 4% per year but prices and overall revenue will continue to decline.

Steve Rotz, marketing manager of Embedded Solutions Group at Micron, says NOR offers some advantages over NAND in some applications.

“There are some customers that value NOR for its fast read and access times and lower cost. I'm not talking about cost per bit, but total cost,” he says.

Some equipment does not require high-density flash and can “use a lower density flash device to store code for $.50 or $.75,” says Rotz.

“If they are just storing code, they don't need that larger memory footprint. NOR does the job very well. It's a small footprint and NOR is quick to design in," he says. 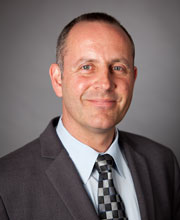 NOR flash tends to be used in products that have longer design cycles and lifecycles and that have high reliability requirements. For instance, it is used in automotive and factory equipment which may be around for 10 years.

“It is on not unusual for us to have customers that have product lifecycles of eight to 10 years. That is very different than an MP3 player” that uses NAND flash.

While NOR may not have as high densities compared to NAND, manufacturers are transitioning to higher density NOR parts and smaller process geometries.

For instance, Spansion is building an 8 Gb NOR flash on 45 nm process technology, says Trill. “And we recently announced that we started to develop 32 nm nodes for people."

“It may not be known to most observers that NOR flash densities up to 8 Gb are required, but surprisingly they are,” he says. “Our customers put those demands on us.”

He says security and surveillance equipment and smart displays will become important drivers for NOR flash.

Smart displays are “very rich displays in smaller form factors that fit into white goods, including refrigerators and washers and dryers,” says Trill. They are also used in factory automation equipment and informational displays.

They “typically have a rich user interface including potentially voice-recognition and touch. The display requires tremendous bandwidth,” he says. NOR is a “very interesting option” for designers of such displays,” says Trill.