An AC LED is a solid-state light source that operates directly from of an AC line voltage. A typical arrangement is two strings of multiple LEDs arranged in opposite polarity with a bias resistor to limit input current.


An AC LED is a solid-state light source that operates directly from of an AC line voltage. A typical arrangement is two strings of multiple LEDs arranged in opposite polarity with a bias resistor to limit input current. However, while simple and inexpensive, this technique suffers from several drawbacks, one of which is the space the LEDs take up.

One improvement is to subdivide an LED die into segments and connect them in series using wire bonding. This shrinks the package size and improves light density, but manufacturing such devices is expensive, and the wire bonding adversely affects reliability.

A new generation of LEDs has taken this approach a stage further by using a single die, but with multiple junctions. Allied with an integrated driver IC, these LEDs allow designers to fabricate compact solid-state lighting that can be connected directly to a mains AC supply. Key advantages are improved light density and small lighting-fixture internals.

This article describes these new devices and explains their advantages for engineers looking for AC-powered LEDs.

Powering LEDs from an AC supply

LEDs are tricky to power because designers must balance the forward-current (If) and forward-voltage (Vf) requirements against the junction temperature, efficacy, and luminosity. Illumination typically requires an If in the 350 mA to 5 A range, and a Vf of 2.5 to 12 V. Running at lower currents and voltages improves efficacy, lowers junction temperature, and extends longevity, while higher currents and voltages boost luminosity (see the TechZone article “High Current, High Brightness LEDs Simplify Power Supply Solutions”).

For example, Cree’s XLamp XM-L2 LED requires a typical Vf of 2.9 V and can withstand a maximum current of 3 A. At a Vf of 2.9 V and If of 700 mA, the luminosity is 310 lm and efficacy is 153 lm/W. Figure 1 illustrates the forward current versus forward voltage characteristic for this chip. 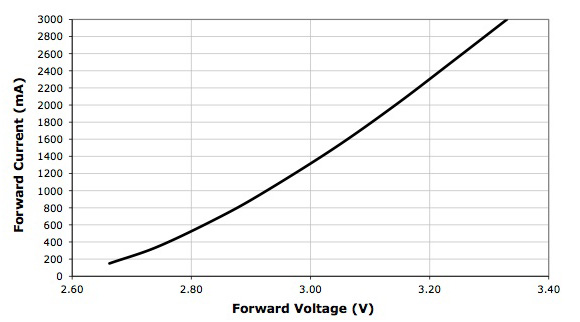 
Due to the fact that an LED requires a relatively low forward voltage to operate, a regulated, stable DC supply is preferred. This is a pain, as traditional incandescent bulbs can operate directly from the mains AC supply. Lighting engineers would like to replace these inefficient devices with LEDs that can do the same.

One answer is to provide an AC-DC converter between the AC mains supply and the LED. Several manufacturers have developed LED light bulbs that screw or push directly into standard sockets by adding the converter circuitry to the fixture itself. However, this is expensive and inefficient because the voltage difference between the input and output of the converter is large. Moreover, inefficiency generates heat, and heat is a killer of LEDs.

Another approach is to configure the LEDs, which, as their name implies, are a kind of diode¬¬, into a full-bridge circuit to convert the AC into DC. It is a novel approach, but is still only another form of AC-DC conversion and will require more power for a given luminosity than a direct AC-driven LED design.

A conventional form of direct AC-driven LED system uses two strings of LEDs, one powered by the negative side of the AC sine wave, the other by the positive. The strings of LEDs are able to deal with the high voltage because the combined voltage drop across all the devices is equal to the supply voltage. A bias resistor limits the input current and the strings are alternately energized and de-energized at the 50 or 60 Hz frequency of the AC mains power.

Another approach is a single string of LEDs in series with a bias resistor attached to the output of a full-wave diode bridge (Figure 2).


While these systems work reasonably well, the main drawback is the space that the LEDs take up. There are also other challenges such as flicker (see the TechZone article “Characterizing and Minimizing LED Flicker in Lighting Applications”) and high total harmonic distortion (THD).

Theoretically, a single, very large LED would require a high current to ensure sufficient luminosity at a typical Vf of 3 V. However, if that die was subdivided into ‘n’ smaller self-contained segments connected in series, the drive voltage would be increased by a factor of ‘n’, and the drive current decreased by a factor of ‘n’. Such an arrangement would improve the efficiency of the power supply that provides the drive current and reduce resistive losses in the die.¹

Several manufacturers have put this theory into practice in an attempt to decrease the space taken up by strings of LEDs powered from an AC mains supply. A large die is cut into separate segments that are connected in series using wire bonding in a Chip-on-Board (CoB) arrangement. This is a viable solution but suffers from several disadvantages, including cost and a decrease in reliability due to the number of wire bonds.

Seoul Semiconductor has improved the CoB technique by subdividing the LED die at the wafer level. The chip itself is not physically separated into many pieces, rather it incorporates several junctions (or ‘cells’) on the same piece of silicon. The company calls the technique Multi-Junction Technology (MJT) and explains that by changing the number of junctions on a single die, it can fabricate LEDs with different voltage drops and lumen outputs as an alternative to stringing LEDs together in series.

The technology has been commercialized in the company’s Acrich MJT family. Figure 3 shows the Acrich MJT die structure where a metallization layer is used to create the interconnections between the die’s junctions.


Although Seoul Semiconductor’s Acrich2 MJT LEDs are able to handle relatively-high voltages, a single device alone is not capable of withstanding 110/120 V or 220/240 V AC power. The company has manufactured modules comprising several MJT LEDs controlled by a single “direct-drive architecture” chip. The module size is much smaller than an equivalent AC LED comprised of strings of LEDs and an AC-DC converter.

The company says the direct-drive architecture chip integrates all the peripheral components, including bridge diodes and passive devices, required for an LED power supply. All the design engineer has to do is connect up the mains supply. 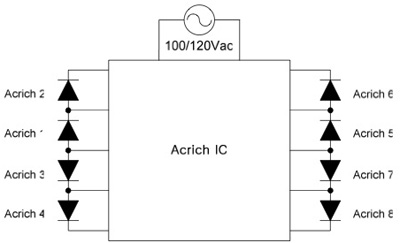 Figure 4a: Acrich drive IC activates MJT LEDs in a sequence shown in Figures 4b and 4c below.


The Acrich drive IC activates the LEDs in a pre-determined sequence depending on the position of the AC sine wave. The company claims this approach increases Vf in steps, allowing for an earlier turn on time, and a better matching of the current to the voltage waveform, thereby improving the system’s power factor and THD.

For more information about the examples described in this article, use the links provided to access product pages on the Hotenda website.