Multifunction sensors that combine proximity and ambient light sensing may be the answer for smartphone designers who are looking to save a little more power, reduce board real estate, and shorten their design cycles.


Multifunction sensors that combine proximity and ambient light sensing may be the answer for smartphone designers who are looking to save a little more power, reduce board real estate, and shorten their design cycles to meet their time-to-market requirements.

These highly integrated devices are designed to save power, extend battery life, and provide optimized viewing in a wide range of lighting environments. This is often a must-have in smartphone applications that are packed with multimedia features and touch-panel operation.

These integrated devices also can be used in a host of other consumer electronics applications and will likely find homes in tablets, GPS devices, and digital cameras, as well as in industrial-type applications.

Initially, these "2-in-1" multifunction devices only integrated the ambient light sensor and the proximity photodiode. The IR emitter (LED) was separate, which resulted in several challenges concerning the design of a shield, or barrier, to keep the emitter separate from the photodiode to prevent crosstalk, which impacts the performance of the proximity sensor.

Now, sensors such as Vishay Intertechnology's VCNL4000 series (Figure 1) fully integrated proximity and ambient light optical sensor contains all the circuitry (IR emitter, photo-pin-diode, ambient light detector, signal processing IC and 16-bit ADC) needed in one device to eliminate the need for light barriers and optical alignment of the IR emitter and photodiode. It's also housed in a small package, measuring 3.95 x 3.95 x 0.75 mm, for further board space savings. The VCNL4000 series comes with an I²C communication interface, which further simplifies design. Vishay also offers the device in a rectangular package, designated as the VCNL4020.

"By combining all these functions into one device, it eliminates the need for any kind of mechanical barrier, which is a big selling point because of the added cost, but also from an assembly manufacturing standpoint for the cell-phone manufacturers because it's a lot easier to use one component," said James M. Toal, senior product marketing manager for Vishay. 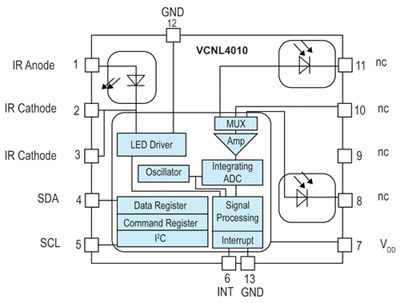 Vishay's VCNL4000 series provides a detection range up to 200 mm. During development, designers will set a count range required on the output to meet their performance requirements, for example, responding to a Kodak grey card at 10 cm, said Toal. During final test, they will check the output and step up or down the forward current setting, which is programmable in steps of 10 milliamps (mA) (from 10 mA to 200 mA) if needed, he added.

You'll also find that many of the newest digital multifunction devices offer an interrupt function with threshold settings, which eliminates the need for the microcontroller to poll for the sensor reading. Typically, both the ALS and proximity sensors will have independent threshold settings. Suppliers say this simplifies and improves system efficiency by eliminating the need to poll the sensor, either for light intensity or proximity.

For example, Vishay's VCNL4010, an update to the VCNL4000, features an interrupt function that allows the "sensor to work independently until a predefined proximity or ambient light event or threshold occurs," said Toal. "It then sets an interrupt, which requires the microcontroller to awaken."

The advantages: designers can reduce their software effort and reduce power consumption by eliminating polling communications traffic between the sensor and microcontroller.

Together, all of these factors speed up design time, while simplifying the design process. Upshot: products get to market faster, which is key in the consumer electronics world.

Offering a wide dynamic range for these devices allows for operation in short distance detection behind dark glass, particularly important in smartphones. Since most offer close to the human eye spectral response (for the ALS), they will work well under different lighting conditions.

And 100 klux should be more than sufficient for typical outdoor environments, according to Avago. At this lighting condition, the company recommends that "the LCD screen should be tuned to be as high as possible to ensure that the end user is able to read the LCD screen," said Neo.

Vishay's VCNL4000 series, with an integrated ambient light sensor, also offers sensitivity close to the human eye with a 16-bit dynamic range from 0.33 lux to 22 klux. While there may not be any advantage to having a dynamic range as high as 22 klux for smartphone applications, there are for other applications. The sensor provides 100 Hz and 120 Hz flicker noise rejection.

These are a few examples of integrated proximity and ambient light sensors currently available in the market. Others include Avago's APDS-9800, Intersil's ISL29011, OSRAM's SFH 7770, and Maxim's MAX4000.

Many of the newest devices, also called 3-in-1 sensors, integrate the complete proximity sensing function in the same package, which makes it much easier and faster to design into a smart-phone application.

As an example, the recently introduced (January 2012) and soon to be available APDS-9900/9901 (Figure 2) integrated 3-in-1 digital ALS and proximity sensors from Avago Technologies integrates the IR LED and synchronous LED driver in a single, compact package that measures 3.94 x 2.36 x 1.35 mm.

Avago's APDS-9900/9901 can be used in indoor and outdoor environments, offering a dynamic range from 0.01 lux to 10 klux. With a dynamic range as low as 0.01 lux, the device can definitely operate behind very dark windows (covers). According to Avago, it also simplifies the supply chain by using a single supplier for the sensing functions. 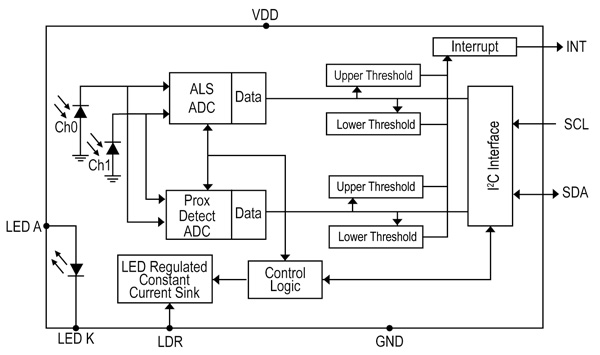 Avago's APDS-9900 offers a programmable interrupt persistence feature with upper and lower thresholds that allows a designer to set how many consecutive exceeded thresholds are required to trigger an interrupt.

John Lim, application engineer for Avago's sensor products, explained: "If there is an occasional glitch or transient not due to an actual object or a brief movement over a device, the designer can choose to ignore that so the interrupt can be triggered, for example, at three counts that exceed the threshold."

In discrete solutions, the key concerns are LED intensity variation and proximity sensitivity matching/variation, and placement distance between the sensor and the LED because designers have to consider two separate components, according to Avago.

Because the proximity sensor for the APDS-9900/9901 includes the IR LED, LED driver, detector and signal conditioning circuit, designers don't have to worry about matching to an external LED. Avago also provides 100 percent factory calibration/trimming up to 100 mm (detection distance) during production test, which eliminates any concerns with these variations.

Smartphone designers will find that integrated proximity and ambient light sensor devices will help them deliver their products to market faster by combining all of the required functions for a complete proximity detection solution in a single package. This eliminates major design headaches, including LED matching and crosstalk between the IR LED and glass surface, which means no additional barrier is required between the LED and photodiode. It also saves board space by combining all functions in a single unit, and it reduces the number of component placements by cutting the number of external devices required.