MOSFETs that Can Take the Heat

This article looks at the architectural improvements and newer processing techniques that are pushing silicon device thermal ratings up.


Power MOSFETs have become very popular in power electronics designs because of their low capacitance and good high-frequency switching characteristics. They have reached into many applications and are helping to open up new markets in applications, from hybrid and electric vehicles through solar power to extreme-environment exploration. The unifying factor of these environments is heat. Automotive engines and solar panels can generate heat that pushes junction temperatures in power devices far higher than 100°C. Such heat can badly affect power semiconductors that are not designed to cope.

Power semiconductors all have temperature limitations. Leakage current increases with temperature and this can accelerate effects that lead to breakdown conditions that can damage circuitry and cause other hazards.

All semiconductors are rated for a given maximum reverse voltage. If the device is operated above this voltage, high electric fields will be generated in reverse-biased electric fields. These electric fields are strong enough to accelerate free-charged particles to high energies. When these accelerated carriers strike electrons bound to atoms, they transfer enough energy to break their atomic bonds and form electron-hole pairs. Under the high electric field, they will be accelerated in opposite directions and can, potentially, strike other fixed electrons, breaking them free in turn. The result is avalanche breakdown, which can destroy the diode layers within power semiconductors, rendering the devices non-functional.

Even if the device is not irreparably damaged, as some devices are designed to withstand a certain amount of avalanche current, a hysteresis effect means the voltage has to drop significantly before the reverse current is shut off, potentially causing damage to other components in the system.

In silicon, heat tends to accelerate the process of avalanche breakdown because higher temperatures will impart thermal energy to valence electrons in the crystal lattice of the power device. As more thermal energy is absorbed, some of those valence electrons will break free of their bonds and move into the conduction bands. Inductive loads increase the risk of breakdown because of the high reverse-bias conditions they can impose on the diode junctions inside a power transistor when used with switching power-supply circuitry.

One answer is to move to wide-bandgap materials such as silicon carbide or gallium nitride as the probability of electrons being promoted to the conduction band by thermal energy is lower than with silicon. However, not many suppliers make these devices, particularly transistors. Another approach is to fabricate more rugged silicon devices that prevent subtle weaknesses in design causing failures too easily.

The most common failure mode is the activation of a parasitic bipolar transistor between the source and drain that can form when the electric field is high at the point where the junction under the gate bends most tightly. This effect is most prominent at high temperature because the resistivity of the silicon increases. As the resistance increases, the voltage drop under constant current rises in turn. If that voltage drop reaches the point where the parasitic transistor turns on, it is likely to remain switched on with damaging results. 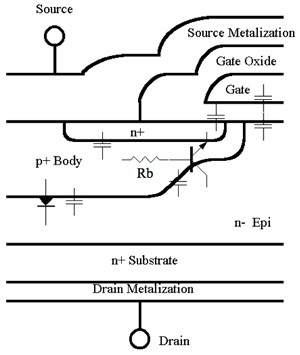 Figure 1: Cross section of a typical power MOSFET showing the parasitic bipolar junction transistor between the body and source.

Typical power MOSFETs are made using vertical processes such that the transistor channels run through the body of the die from bottom to top. This allows multiple sub-transistors to be arrayed across the surface of the die, often in a hexagonal pattern to maximize packing density. Such devices exhibit lower on-resistance values thanks to the use of many parallel channels. 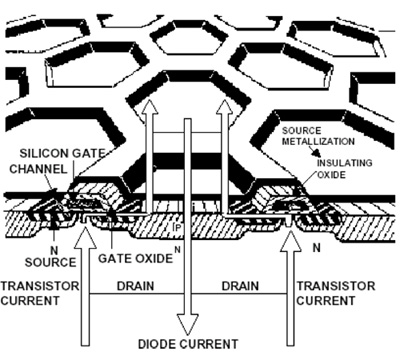 Figure 2: Power MOSFETs use hexagonal packing of sub-transistors to provide high conductance when switched on.

The problem in designs that do not take account of the potential for avalanche breakdown is that intra-die process variations will make some groups of cells more vulnerable to breakdown than others, so that the failure begins in one specific area. Avalanche-resistant devices that are designed to reduce the probability of the parasitic bipolar transistor switching-on will use a combination of techniques. One is to increase the conductivity of the source region by increased doping. Another is to alter the shape of the source-substrate junction under the gate to further reduce the distance carriers need to travel along the path of the parasitic transistor to reduce its effective resistance, and therefore reduce the probability of the parasitic transistor turning on.

Devices designed for automotive applications are often rated for extended temperatures, as they have been hardened against avalanche. For example, devices in the Vishay range of automotive-rated TrenchFET products will operate at temperatures up to 175°C. Devices such as the SQ1420EEH support a drain-source voltage of 60 V and current flow of 1.4 A with an on-resistance of 0.14 Ω at 10 V.

International Rectifier’s Hexfet family includes versions that operate up to 175°C. One example is the IRLR3110, designed for harsh industrial environments and capable of withstanding multiple avalanche events up to the maximum junction temperature. The device has a maximum drain-source voltage of 100 V, and in its standard package can sustain 42 A at 25°C. Its silicon limit is somewhat higher at 63 A. The device has an on-resistance of just 14 mΩ and also supports fast switching times.

Honeywell’s HTNFET extends the temperature range of silicon devices to 225°C and 300°C with de-rating. It was designed specifically for very wide temperature-range applications such as down-hole instrumentation for mining and similar markets, aerospace, turbine engines, and industrial process control. The power MOSFET is fabricated using a silicon-on-insulator (SOI) process to dramatically reduce leakage currents at high temperature and reduce the probability of stray carriers causing an avalanche through impact ionization.

Supporting current up to 1 A with an on-resistance of 0.4 Ω at 0.1 A, the device is suitable for applications where DC control or frequent switching is required. The HTNFET supports a breakdown voltage of 55 V. The gate-source reverse leakage is just 100 nA.

Although the Cree SiC MOSFET has a higher voltage limit than silicon, there are some differences in characteristics when compared to what is usually expected with high-voltage silicon MOSFETs. One is a smaller transconductance rating, which demands a higher gate-source voltage of 20 V to maintain high performance. As a result, gate drivers need to provide a voltage swing of 22 V or more. Although the voltage swing is high, gate charge of the SiC MOSFET is normally smaller than that of silicon MOSFETs.

The gate drive pulse needs to be carefully controlled. Although the nominal threshold voltage is 2.3 V, the device does not conduct fully until the gate-source voltage reaches 16 V, a wider range than is normally found with silicon devices. This characteristic reduces noise margin such that excessive ringing that may occur on the gate-drive signal line could cause unintentional turn-on or partial turn-off of the device. The gate resistance should be selected carefully to insure that the gate-drive pulse is adequately dampened.

Although it has more in common structurally with a bipolar transistor than a MOSFET, the Genesic Semiconductor GA04JT17-247 is compatible with MOSFET gate-drive techniques and can operate at up to 175°C with the ability to withstand drain-source voltages of 1700 V at a current of 4 A at 95°C.

The ‘super’ junction transistor (SJT) made by Genesic is a gate-oxide free, normally-off, quasi-majority carrier device with a square reverse-biased safe operation area (RBSOA), which allows rugged operation in typical inductive motor and actuator drive applications. The SJT also has a slightly positive temperature coefficient for on-resistance, making it suitable for paralleling devices in high-current configurations. The current-controlled device requires a small gate current that can be produced by commercial, commonly available gate drivers. The company recommends using a dual-source circuit to drive the devices.

Unlike a conventional bipolar transistor, the SJT does not have a quasi-saturation region and does not store charge in the drift region. This provides temperature-independent, fast-switching transients which reduces switching losses, providing high efficiency for designers that need their power circuitry to operate at high temperatures.

Thanks to architectural improvements and the use of SOI processing techniques, silicon devices are pushing their thermal ratings up. At the same time, SiC devices provide the ability to move to the voltages often associated with IGBTs with the promise of even higher-temperature operation in the future.