Monitoring the Human Body for Wellbeing and Sports Performance

This article looks at how the new IEEE 802.15.6 wireless Body Area Network (BAN) standard can incorporate an array of highly miniaturized sensors.

The vast array of highly miniaturized sensors, such as piezoelectric, MEMS and optical sensors, are enabling rapid development of human body-monitoring applications, aided by precision analog and processing ICs, as well as the emergence of the new IEEE 802.15.6 wireless Body Area Network (BAN) standard.

In 2012, the IEEE published its Wireless Body Area Networks (BAN) standard, IEEE 802.15.6, for short-range wireless communications ‘in the vicinity of, or inside, the human body’. The standard makes special provision for aspects such as safe use of RF radiation in close proximity to human tissue, the effects of variations between human beings such as build and gender, and support for Quality of Service allowing prioritization of data streams from various types of sensors. These and other key aspects such as low power consumption, non-interference assurance, and high security, differentiate the IEEE 802.15.6 BAN standard from Personal Area Network (PAN) standards such as Bluetooth® or ZigBee®, and are better suited to the breadth of BAN applications.

The publication of this standard should provide a catalyst for the development of many new products and applications in sectors such as healthcare, personal wellness monitoring, and sports fitness. Markets for portable and wearable monitors measuring vital signs such as heart-rate, blood pressure, and blood glucose are growing, enabled by falling costs of electronics such as microcontrollers and development of miniature sensors that are comfortable and easy to use.

More recently, the arrival in the market of tiny MEMS sensors capable of detecting linear and angular motion simultaneously, force/pressure and orientation provide the opportunity for many new types of activity monitoring devices for applications ranging from prosthesis control to athletic performance monitoring and sports safety.

Monitoring heart activity is a basic requirement in healthcare activities from initial patient assessment to ensuring safety during surgical procedures and managing life-support equipment. ECG machines have been used for many years in hospitals and doctors’ surgeries. More recently, portable, low-cost heart monitoring equipment has increased opportunities for home monitoring by patients, as well as athletic performance monitoring by sports people and enthusiasts. Cardiac activity can be detected by sensing electrical signals that are associated with the repeated depolarization and repolarization of the heart’s ventricles. These signals are sensed using electrodes, which may be attached at several points on the body such as the chest, arms, and legs to help improve accuracy by eliminating common-mode noise. In HRMs (heart-rate monitors) for sports applications, the sensor may be contained in a chest strap that can be worn easily without inhibiting movement. Analog Devices has a ready-to-use heart-rate monitor front-end IC (AD8232) and evaluation board (AD8232-EVALZ), configured for applications that use three electrodes. Freescale supports development of HRM applications on its Kinetis or Flexis microcontrollers through its MED-EKG development board (Figure 1), which plugs into the Freescale Tower System prototyping platform. This approach gives designers the choice of using a discrete instrumentation amplifier mounted on the board or taking advantage of microcontroller analog peripherals. Fingertip electrodes are provided on the board or, alternatively, low-cost external electrodes may be attached for greater accuracy. 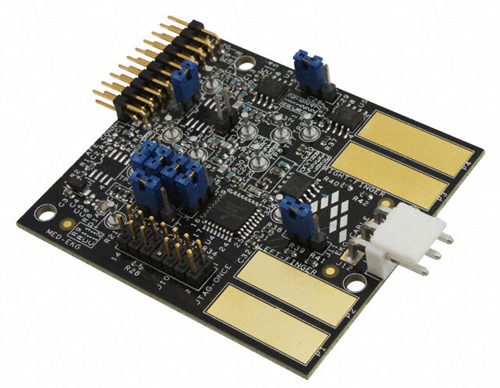 Figure 1: The Freescale MED-EKG development board can monitor heart rate through board-mounted or externally connected electrodes.

Sports heart-rate monitors have been widely used by professional trainers as well as club-level athletes and enthusiasts in cardiovascular sports such as running, swimming, and cycling. As sports science moves on, however, new metrics have emerged, particularly in cycling. With the arrival of miniature strain gauges such as the Vishay Precision Micro-Measurements 1033 series, leading trainers have begun to use power metering to help improve cyclists’ performance. The strain gauge may be located in the pedal, shoe, or crank, or in the hub of the rear wheel. With power and heart-rate data both available, a more accurate picture of the cyclist’s fitness is possible. Top professional teams have been using power meters for several years, and systems are now entering the market at prices within the reach of dedicated amateur cyclists.

The two components of a patient’s blood pressure reading, the systolic (SBP) and diastolic (DBP) pressures, are measured by inflating the cuff beyond the SBP causing a change in the amplitude of the heartbeat signal, and then measuring changes in the pulse amplitude as the cuff is deflated. A pressure sensor such, as the Freescale MPX2300 or MPXV5050GP precision micro-machined piezoelectric sensors may be used to generate an electrical signal proportional to the arterial pressure exerted inside the cuff. The MPX2300 is specially designed for high-volume disposable applications, and is packaged as a Chip Pak (423A-03) device using biomedically approved polysulfone materials. Further information about blood pressure monitor design using Freescale pressure sensors and medically oriented microcontrollers is available in application notes AN4328 and AN3500. The design reference manual DRM101, and MED-BPM evaluation board for use with the Freescale Tower System, support designers of blood pressure monitoring applications and help speed up time to market.

Blood oxygen saturation is a measure commonly used by healthcare professionals to check for conditions such as anemia or correct operation of the heart. Pulse oximeters provide a non-invasive way to collect this information by comparing the absorption of red and infrared wavelengths emitted by high-precision LEDs. The red source is used to measure deoxygenated hemoglobin, and the infrared source to measure oxygenated hemoglobin.

The blood oxygenation is calculated from the difference between these two levels. The sensor is usually built into a clip attached to a finger or ear lobe. Usually, LED emissions from one side are transmitted through the body to be collected by a photodiode on the other side. The signal from the photodiode is collected by analog front-end (AFE) circuitry comprising a trans-impedance amplifier such as Texas Instruments’ OPA381 or Maxim MAX9945, via a further amplifier to an ADC such as the Maxim MAX1162.

Maxim has assembled a selection of precision components for AFE, processing and system-management functions suitable for a variety of medical devices, with application information, in its Medical Solutions Guide Book to help designers complete medical electronics projects. Figure 2 shows how recommended Maxim components can be used to build a complete pulse oximeter. 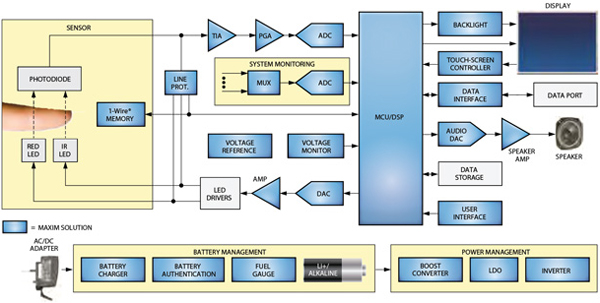 Blood glucose monitoring is vital for those with conditions such as diabetes, to help maintain stable blood condition. Home monitoring equipment has become smaller, easier to use, and less invasive, requiring smaller-size blood samples and so allowing regular daily testing to be less painful. A small sample of blood, acquired from an area such as a finger using a small lance, is typically analyzed using a test strip that produces an electrochemical reaction when blood is deposited on an active area. When the test strip is inserted in the handheld monitor, the electrochemical current is input to a trans-impedance amplifier that produces an output voltage proportional to the level of glucose in the sample.

An alternative measurement technique uses optical reflectometry to determine glucose concentration by analyzing the color of the blood sample. The sample is alternately exposed to light from two LEDs, and the signal received by a photodiode, such as the Vishay BPW34 PIN photodiode, and is conditioned by analog front-end circuitry and digitized for analysis by software running on a microcontroller. The Maxim MAX1358 and MAX11359 are complete integrated AFE ICs for use with blood glucose meters and other medical device applications. They can be used in electrochemical or optical-reflectometry meters, and integrate circuitry for setting the bias voltage for an electrochemical test strip or the LED current for optical-reflectometry measurement. Maxim also offers the MAX1329, which is featured for use in smaller meters and delivers accurate results with electrochemical or optical-reflectometry test strips.

Aided by the arrival of the IEEE 802.16.6 wireless standard, the concept of the Body Area Network continues to evolve and companies are already experimenting with applications such as patches or plasters capable of measuring multiple vital signs continuously and relaying these to professional care coordinators. In addition, the IEEE BAN standard should also enable the development of new types of activity monitors designed to detect movement and motion using Micro Electro-Mechanical System (MEMS) devices such as accelerometers, gyroscopes and magnetometers in tiny surface-mount packages. Devices such as these are already widely used in smartphones and laptops for functions such as free-fall detection, portable navigation devices for purposes such as indoor navigation and dead reckoning, and in game controllers and remote controls.

STMicroelectronics is the top supplier of MEMS devices for mobile applications. Their LIS331DLH 3-axis accelerometer has a 16-bit digital data output and ultra low-power modes, and can be used in a variety of activity monitors such as pedometers. It also has applications in gaming and virtual reality. MEMS accelerometers suitable for a similar range of applications are available from a number of manufacturers, including the Analog Devices ADXL344 and Freescale MMA7660.

By combining multiple types of MEMS sensors, or other circuitry such as a microcontroller, single-package devices can support more sophisticated functionality. A 3-axis accelerometer and magnetometer can be used together to create a digital compass, which can be easily embedded in a wearable device such as a wristwatch, creating a convenient device for use in outdoor activities such as adventure sports. It is worth noting at this point that piezoelectric sensors such as STMicroelectronics’ LPS331AP 3 mm x 3 mm pressure sensor also allow equipment such as sports watches to include barometer or altimeter functionality.

Combining an accelerometer and MEMS gyroscope, on the other hand, provides the information needed for a system to interpret gestures accurately, such as during gameplay. The accelerometer measures linear acceleration, while the gyroscope detects angular rate to allow accurate sensing of movement. Today, such sensors are typically built into a handheld controller. In the future, sensors could be embedded in wearable items such as a glove, a sock, or a full body suit to provide more immersive experiences. By detecting body movement and gestures accurately and precisely, MEMS sensors can also be used to study physiology for medical applications such as improving the design of prosthetics. Evaluation boards and kits are available from all manufacturers to speed up development of MEMS-based applications. These include the STEVAL-MKI090V1 adapter board for the ST LIS333DL accelerometer shown in Figure 3, D3965MMA7660FC-ND for the Freescale MMA7660, and the EVAL-ADXL344Z-DB-ND for Analog Devices ADXL344. 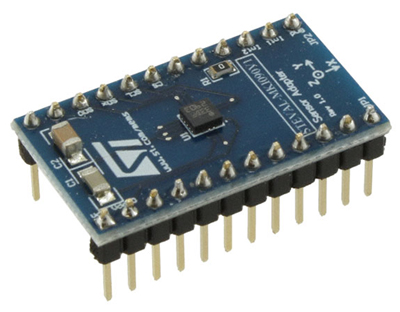 As part of a project aiming to reduce instances of Sports Brain Injury (SBI) caused by concussions sustained during contact sports, ST has helped develop a wearable patch that combines the LIS331DL accelerometer and the L3GD20H MEMS gyroscope with a microcontroller and RF circuitry. This allows concussion management software to monitor the impacts received by players in a game, such as during tackles, and alert officials if any player is deemed to have suffered excessive exposure. This system should help ensure athletes receive proper recuperation where necessary; another important medical-monitoring application enabled by precision miniature sensors.

Highly miniaturized precision sensors capable of detecting movement, force, and vital indicators such as heartbeat and blood condition are key enablers of rapid growth in applications and markets for portable medical monitors. Together with precision analog ICs and microcontrollers, and enhanced with wireless networking enabled by the new IEEE 802.15.6 standard, this technology has the potential to improve quality of life in applications ranging from tele-health and monitoring of personal wellbeing, to fitness training and sports safety.