Power-line integrity has become an important aspect of industrial and medical equipment design. Many processes are now dependent on the real-time monitoring of sensor inputs that are susceptible to noise and interference. Electrical transients can easily upset delicate measurements. If these conditions are not compensated, the incorrect readings can lead to closed-loop control loops suffering aberrations or the system missing important safety-related signals.

As a result, some form of AC line monitoring has become an important additional sensor input, to ensure that transients and other power-line distortions do not affect equipment. Power-line monitoring can be used to ensure that the power converters used by other high-power equipment are functioning properly and not injecting unwanted harmonics or presenting unbalanced loads to the grid, which may then disrupt electricity delivery. Users may also employ the data to determine whether processes need optimizing to reduce overall energy consumption by tracking power-usage hotspots throughout the plant.

The key question over designing an AC line monitoring subsystem is to determine which types of measurement are important as these will influence the choice of ADC used to sample the inputs, as well as the number of input channels. For example, a three-phase monitor used to determine harmonic distortion will need to sample both voltage and current for a total of four phases, resulting in a requirement for eight ADC input channels. The fourth phase that needs to be sampled is the neutral line: this will show current flowing if the main phases are unbalanced.

An AC line monitor configured primarily for transient detection can use a relatively simple ADC design and be connected to a low-end microcontroller or hardware state machine that reacts to spikes in the input signal. For more advanced measurements, such as harmonics, the ADC resolution and accuracy are more important.

The Rogowski coil avoids the problem of iron-core saturation by removing it in favor of an air core, which does not saturate in the presence of a powerful external magnetic field. A further advantage of the Rogowski coil is that it does not need direct contact with the conductor – the coil simply needs to wrap around the conductor.

The output of the Rogowski coil current sensor is proportional to the first derivative of the AC current that passes through it. As a result, the output of the sensor needs to be integrated before it can be multiplied by the primary voltage to provide a power reading. Because of this, the Rogowski coil cannot substitute directly for a current transformer. The signal-conditioning electronics need to provide the integration function. The engineer has a choice of whether to use analog integration, typically based on an op-amp circuit, or digital integration.

A Rogowski coil offers an easier ability to retrofit AC line monitoring to an existing insulation, as it does not require the electrical connection to be broken. The conductor has to be separated so that the current sensor can be slid onto it. However, if the AC line monitoring circuitry is part of the industrial system being installed this should not present an issue.

A more direct connection is possible with some devices. For simpler AC line monitoring, designed primarily for detecting transients on a single-phase power input, Silicon Labs’ Si8900 offers a combination of ADC and control together with up to 5 kV of galvanic isolation to separate the power-monitoring circuitry from the rest of the system. This design allows the use of resistors to scale the line voltage down to the range of the ADCs with op-amps acting as differential amplifiers for signal conditioning. A simple LDO fed from the power line, connected by a series capacitor, provides power to the device. 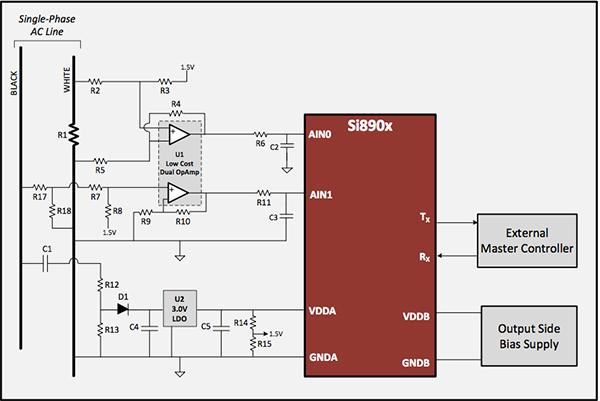 The Si8900's ADC subsystem is based on a 10-bit, 500 ksample/s successive-approximation converter preceded by a three-channel analog input multiplexer and a series gain amplifier with user-programmable settings of 1x or 0.5x gain. The ADC has an internal reference, but it can also use an external reference if the designer prefers. Other on-chip functions include a control state machine that supervises all transactions between the host controller and the front-end using a UART, I2C or SPI serial port for communications.

The Si8900-based front-end can operate in one of two user-selectable operating modes. In demand mode, the external host controller triggers a single ADC conversion on demand. The device also can operate in burst mode, where ADC conversions are performed continuously. The system host processor can switch from one mode to the other as needed, involving less intervention from the host.

The ADS131E08 from Texas Instruments can interface to a current transformer or Rogowski coil for current measurements, or be attached to a resistor-divider network or transformer to measure voltage. The device provides eight ADC channels to support full four-phase measurements of current and voltage. The ADCs are based on a sigma-delta design providing resolution of up to 24-bit and are preceded by programmable gain amplifiers and EMI filters. By controlling the output sample rate, designers can tune the noise performance of the ADCs. As the output data rate reduces, the noise drops correspondingly. For example, reducing the output data rate from 64 ksample/s to 1 ksample/s increases the effective number of bits from 12.27-bit to 18-bit when using a 3 V power supply to the device and the internal 2.4 V reference. 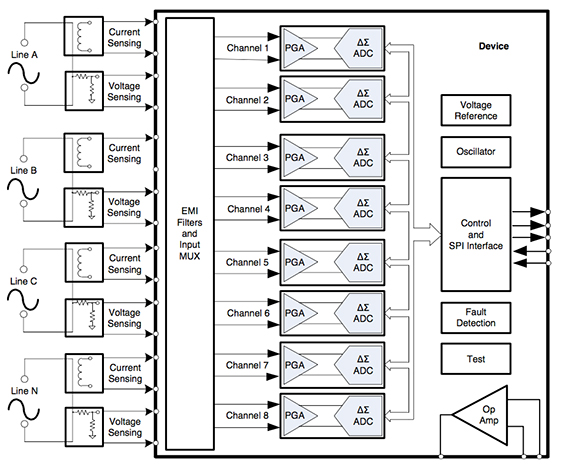 Communication to the signal-processing host microcontroller or DSP is through an SPI port. Input over- or under-range detection can be performed using integrated comparators and a set of programmable trigger-point settings. The ADS131E08 has a flexible per-channel input multiplexer that can be independently connected to internally-generated signals for temperature and fault testing. Fault detection can be implemented internal to the device using the integrated comparators together with trigger levels controlled by digital-to-analog converters.

The MCP3911 from Microchip Technology offers a high-accuracy option for single-phase installations, providing two 16-bit or 24-bit sigma-delta ADCs. The MCP3911 is capable of interfacing a large variety of voltage and current sensors including shunts, current transformers, Rogowski coils and Hall-Effect sensors. The device is supported by two programmable gain amplifiers, a phase-delay compensation block and digital offset and gain error calibration registers. Host communication is through a 20 MHz SPI interface.

Providing multiple inputs and, in some cases, isolation capabilities, ADCs designed for AC line monitoring are easing the task of building industrial systems that are able to check power status and react to changing conditions effectively.