A look at the different trends in reducing the size, which has many complex design engineering trade-offs, and power consumption of wireless systems.


This article looks at the different trends in reducing the size and power consumption of wireless systems with examples from Texas Instruments, Hittite and Lime Microsystems. From the digital baseband to highly-integrated RF CMOS technologies and new materials to reduce the size of power amplifiers and wireless power devices, the drive to miniaturization in wireless has many complex engineering tradeoffs. Component design also plays a key part in the trends, with reconfigurable wireless devices integrating more of the system components to reduce the overall size of the system board.

The increasing demand to connect up the world is driving wireless systems to be ever smaller. Being able to fit a wireless link into a toothbrush, or even a pair of dice, is part of the increasing move to the Internet of Things (IoT) and space is a critical design criteria. However, there are many different optimizations for miniaturization in wireless systems. The short range, low-power wireless transceivers are benefiting from the scaling of CMOS manufacturing technology with foundry suppliers now including RF libraries on aggressive process nodes of 28 nm and 20 nm. These processes allow the transceiver, at 2.4 GHz for Wi-Fi or Bluetooth, to be integrated on the same die as the baseband MAC protocol processor and so deliver a high performance wireless link in a few square millimeters.

For example, the CC3100 from Texas Instruments is a Wi-Fi network processor subsystem in a 9 x 9 mm QFN package. Alongside a dedicated ARM MCU that completely offloads the host MCU, the device includes an 802.11 b/g/n radio, baseband, and MAC with a crypto engine for fast, secure Internet connections with 256-bit encryption. All this reduces the footprint of a Wi-Fi node for the IoT, and the CC3100 supports Station, Access Point and Wi-Fi Direct modes along with embedded TCP/IP and TLS/SSL stacks, HTTP server and multiple Internet protocols.

The miniaturization is enhanced with an integrated power management subsystem that includes integrated DC-DC converters supporting a wide range of supply voltages. This enables low-power consumption modes, such as ‘the hibernate’ with RTC mode requiring about 4 µA of current and also removes the need for external power management devices that occupy additional board space.

The CC3100 device can connect to any 8, 16, or 32-bit MCU over the SPI or UART Interface and the device driver minimizes the host memory footprint requirements requiring less than 7 KB of code memory and just 700 bytes of RAM for a TCP client application, reducing the need for external memory. 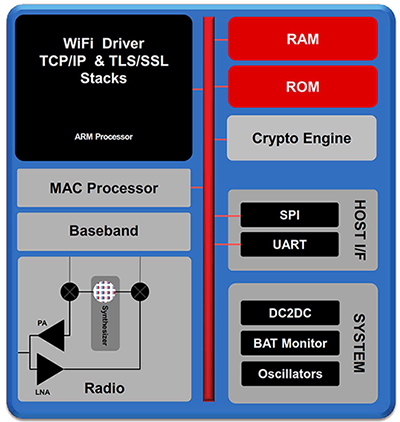 Figure 1: The integration of a CPU and radio for the Texas Instruments CC3100 allows a Wi-Fi system to be reduced in size.

This level of miniaturization is made possible by the focus on a single frequency and a single protocol in a relatively short-range application, but often the miniaturization challenge in wireless systems comes from the multiplicity of frequency bands and the demands of performance. One way to tackle the demand for performance has been to have multiple antennas and multiple signal chains, but this has expanded rather than reduced the size of the solution. In this situation highly targeted integration can help to reduce the overall size of the RF front-end in multiband and multi-standard Cellular base-station diversity receivers, MIMO infrastructure and wideband receivers.

For example, Hittite's HMC1190LP6GE is a high-linearity dual-channel downconverter with integrated PLL/VCO in a 6 x 6 mm QFN package. It operates from 700 MHz to 3.5 GHz and is designed specifically for multi-standard receiver applications that require a compact and low-power solution. 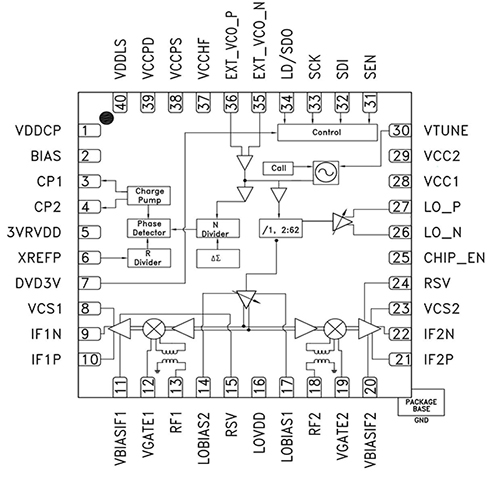 The integrated Phase Detector (PD) and delta-sigma modulator is capable of operating at up to 100 MHz; permitting wider loop-bandwidths and the PLL/VCO section can phase adjust and synchronize multiple RF devices, enabling scalable MIMO and beam-forming radio architectures. Additional PLL/VCO features include a configurable output mute function, an Exact Frequency Mode that enables both products to generate fractional frequencies with 0 Hz frequency error and the ability to synchronously change frequencies without changing the phase of the output signal.

Unlike conventional narrow-band downconverters, the HMC1190LP6GE supports both high- and low-side LO injection over all RF frequencies, with integrated LO and RF baluns. This enables control of IF and LO amplifiers and bias control interface to high linearity passive mixer cores, and this combination of a balanced passive mixer with a high-linearity IF amplifier architecture provides excellent LO-to-RF, LO-to-IF, and RF-to-IF isolations, reducing the need for external filters. By integrating programmable RF output phase features, multiple devices can be easily synchronized to build scalable MIMO and beam-forming radio architectures.

The combination of innovative chip and system design can dramatically reduce the overall footprint of a wireless system that has to support multiple frequencies around the globe. The LM6002 software defined radio transceiver from Lime Microsystems supports any frequency band from 300 KHz to 3.8 GHz, encompassing almost all the popular wireless links around the world.

The reconfigurable architecture allows different types of protocols to be supported, configuring the ADCs, mixers and filters within the chip in different ways to create different up and down chains. This eliminates the need for a separate signal chain for each frequency band, dramatically reducing the size of the wireless front-end and offering designers significantly more flexibility in their designs. Being able to have one design that can be shipped around the world and easily configured for each different region saves on production, test and product management costs.

Being able to do this in a smaller footprint on the board greatly assists in the miniaturization of the overall system. Both transmitter and receiver are implemented as zero IF architectures providing up to 28 MHz modulation bandwidth (equivalent to 14 MHz baseband IQ bandwidth). On the transmit side, the IQ DAC samples from the baseband processor are provided to the LMS6002D on a 12-bit multiplexed parallel CMOS input level bus. Analog IQ signals are generated by transmit DACs on the chip and fed to the TXINI and TXINQ inputs, and low-pass filters remove the artifacts created by the zero-hold effect of the DACs. 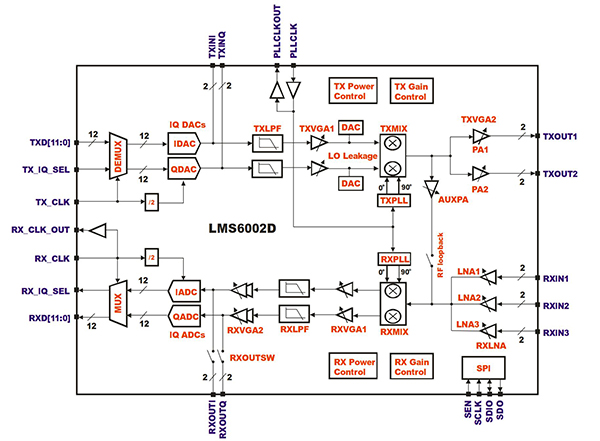 The IQ signals are then amplified in TXVGA1 and a DC offset is added to cancel out the leakage from the local oscillator. The IQ signals are then mixed with the transmit PLL output to produce a modulated RF signal. This RF signal is then split and amplified by two separate variable gain amplifiers and two off-chip outputs are provided as RF output.

The LMS6002D also provides an RF loop-back option that allows the RF signal to be fed back into the baseband for calibration and test purposes. This is amplified by an auxiliary PA (AUXPA) in order to increase the dynamic range of the loop but also reducing the overall footprint of the RF front-end.

On the receive side, three separate inputs are provided each with a dedicated low-noise amplifier (LNA). After being boosted by a programmable low-noise amplifier (RXLNA), the signal is mixed with the receive PLL (RXPLL) output to directly down convert to baseband. The resulting analog IQ signals are converted into the digital domain in the receive ADCs and provided to the baseband processor on a multiplexed 12- bit CMOS output level parallel bus.

The configurable, multiband operation that drives the size reduction comes from the two transmitter outputs and three receiver inputs that are controlled by a set of internal registers which can be accessed through a serial port.

In order to enable full duplex operation, the LMS6002D contains two separate synthesizers, both driven from the same reference clock, avoiding the need for two chips and helping to further reduce the footprint of the front-end.

Lime has also taken the opportunity to reduce the system size even further by allowing designers access to the individual components within the LM6002. If an element such as an ADC or filter is not being used in the configuration, these can be accessed and used by the designer for other parts of the design, avoiding the need for extra components on the board. For example, by closing the RXOUT switch and powering down RXVGA2, the RXOUTI and RXOUTQ the pins can be used as the IQ ADCs inputs. In this configuration, the ADCs can be used to measure two external signals, such as an off-chip PA temperature sensor or peak detector.

All of this meets the increasing need for miniaturization of wireless systems.

Miniaturization is a compelling trend in wireless systems, with the Internet of Things driving demand for wireless connections in all sort of equipment. However, there are many other wireless applications where miniaturization requires other engineering tradeoffs and is just as important. Multiband systems can be reduced in size by using software-defined radio architecture, while the performance of all kinds of base-stations can be boosted by MIMO architectures and antenna diversity, where the integration options are very different. This is balanced against power dissipation, interference and synchronization, highlighting the challenges in the continuing miniaturization of RF systems.