The ability to design in reliable, accurate sensor functionality within the constraints of an ever-shrinking space is critical in a wide range of applications.

The ability to design in reliable, accurate sensor functionality within the constraints of an ever-shrinking space is critical in a wide range of applications — and a difficult requirement. However, among other benefits, miniaturization, including downsizing module systems, can free valuable board space and reduce interference by giving designers greater flexibility to position components on the printed circuit board (PCB).

The medical industry continues to be a major driver for sensor miniaturization as well as ultra-reliability as extremely small, accurate sensors are required for applications inside the human body, where they hold great promise in medical procedures such as arthroplasty (force sensors employed in joint replacement) and spinal fusion. In external use, sensors suppliers must provide flexible mounting options to ensure that the sensor is positioned as close to the patient and/or fluids (e.g., pharmaceuticals, blood or water) as possible for accurate and precise measurement.

The development of small, portable healthcare equipment to accommodate tight spaces in hospitals also allows care providers to quickly and easily move equipment from one patient to the next. The miniaturization of sensors is helping to make this possible in such designs as mobile medical devices, wearable technology, and handheld instruments.

Many elements must converge to enable this downsizing.  For example, beyond the physical and packaging requirements of fitting into an end product that is itself small in size, there are budgetary and technology issues such as a constant need to reduce BOM costs via integrating multiple sensor functions into a single, smaller package.

Putting the evolution of medical sensors into context, let’s take a brief look at the history of pacemakers.

Alberto Vejarano Laverde, a Colombian doctor, joined forces with Colombian electrical engineer Jorge Reynolds Pombo to construct the first pacemaker. This one weighed 45 kg or 99.2 lbs. and was powered by a 12 volt auto battery with electrodes attached to the heart and was used to keep Gerardo Florez, a 70-year-old priest, alive. Once silicon transistors came into the picture, things became a bit easier. The first fully implantable pacemaker was in 1958 in Sweden. It was connected to electrodes attached to the myocardium of the heart. It lasted a whopping three hours. A second implanted device made it two days. The first implantable pacemaker recipient, Arne Larsson, actually received a total of 26 devices and died at the age of 86.

As with most electronics innovation, pacemakers are getting smaller with greater capabilities. For example, recent advances include leadless pacemaker devices that perform as well as their conventional competitors, and with a size that’s 10 percent of traditional devices, the mini device is placed directly inside a patient's heart. This is done without surgery via a catheter. Integration is high, even in its small state, as it houses activity sensors, metabolic sensors, and dual sensors that are able to measure temperature, posture, and the consequences of arrhythmias.

Pacemaker and other cardiac-related technologies have been evolving continuously because heart disease is the major cause of death in developed countries and early diagnosis, treatment, and maintenance are critical. Biomedical engineers have already succeeded in developing micro-scale instruments to open blocked arteries and treat cardiovascular disease. However, these tools are still prone to cause infection. Miniaturized nanotechnology sensors will be able to sense and monitor biological signals, such as the release of proteins or antibodies in response to cardiac or inflammatory events.

In addition to pacemakers, other medical-targeted announcements are hitting the news wires regularly these days. Recently, Twente University, for example, revealed a prototype of the world’s smallest hand-force sensor1 used to measure motor functions in patients in rehabilitation. Smaller than a fingertip, it can measure the forces exerted by your hand. A sensor as small as this can be built into gloves and prosthetic devices, as well as designed into bicycle pedals, shoe soles, or touchscreens. In addition to measuring total force, the sensor can measure the direction in which a force is applied, something that is important for a wide range of applications. The device measures loads involved in physical labor and the performance of athletes or rehab patients as a means to improve skills, and it solves the challenge of having a sufficiently small unit to measure the forces exerted between fingers and the objects being gripped.

Current developments in sensor miniaturization for medical applications are fast moving out of the laboratory and into the work-a-day world.  Consider human respiration, which requires measurement of air flow in and/or out of human lungs during breathing.  Monitoring and assessing of patient respiratory function is important during conscious sedation, a pharmacologically induced state of relaxation in which the patient remains conscious and cooperative during, for example, dental treatment. Knowledge of the respiration cycle is also useful in the detection of sleep apnea.  Typically, these techniques measure flow in a breathing tube indirectly, by sensing flow-induced differential pressure in a shunt configuration, at two ports positioned along the side of a tube.

Pressure sensors can be integrated into many designs because they provide numerous mating connection and packaging options (surface-mount, DIP, SIP), as well as a choice of outputs (analog or digital). Used for medical instrumentation and in respiratory breathing the All Sensors Miniature series of pressure sensors offer space savings combined with high performance. The H-GRADE is a high-accuracy version of the company’s millivolt-output pressure sensors (Figure 1). They provide a calibrated millivolt output with superior output characteristics, reducing output-offset errors due to factors such as change in temperature. The supplier also notes that the sensors offer stability during warm-up and stability over long time periods. In addition, the sensor utilizes a silicon, micro-machined, stress concentration enhanced structure to provide a linear output to measured pressure.

This series of sensors is intended for use with non-corrosive, non-ionic working fluids such as air, dry gases, and the like. The output of the device is ratiometric to the supply voltage and operation from any DC supply voltage up to +16 V is acceptable. Features include 0 to 4" H2O to 0 to 100 PSI pressure ranges, 0.5 percent linearity, temperature compensation, and calibrated zero and span. 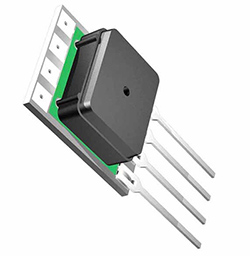 Figure 1: Used in medical apps, the All Sensors pressure sensor maintains high accuracy in spite of its size.

Another example of a sensor small enough for common medical apps is the MLX90615SSG-DAA-000-TU ultra-small, intelligent non-contact IR thermometer from Melexis Technologies (Figure 2).  Used in ear and fever thermometers, as well as for continuous body temperature monitoring, the device is said to be the tiniest “intelligent” infrared thermometer in the world, with a diameter of only 4.7 mm (0.185") and height of 2.7 mm (0.106"). 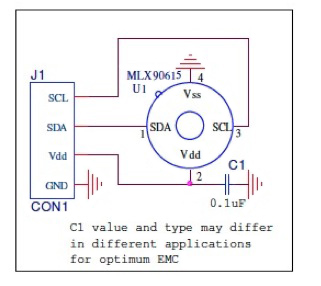 Figure 2: A functional diagram of the MLX90615. Based on its low-noise amplifier, 16-bit ADC, and powerful DSP unit, a high accuracy and resolution is achieved.

A signal-processing chip is integrated in the Transistor Outline package providing plug-and-play advantages for the fully calibrated thermometer. Thanks to its low-noise amplifier, 16-bit ADC, and its DSP unit, a high accuracy and resolution of the thermometer is achieved; better ±0.1˚C accuracy in the key range of 30-40˚C, for example.

In the medical field accelerometers are used for the monitoring of movements. An example of a miniature sensor that is used in sports and health devices is the 3-axis ADXL 335 Accelerometer from Analog Devices (Figure 3). 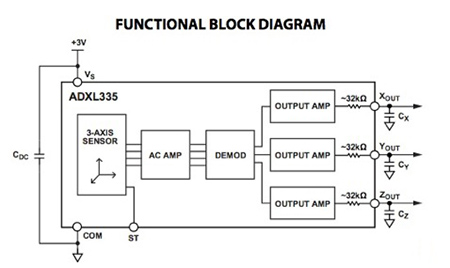 Polysilicon springs suspend the structure over the surface of the wafer and provide a resistance against acceleration forces. Deflection of the structure is measured

using a differential capacitor that consists of independent fixed plates and plates attached to the moving mass. The fixed plates are driven by 180° out-of-phase square waves. Acceleration deflects the moving mass and unbalances the differential capacitor resulting in a sensor output whose amplitude is proportional to acceleration. Phase-sensitive demodulation techniques are then used to determine the magnitude and direction of the acceleration.

The demodulator output is amplified and brought off-chip through a 32 kΩ resistor. The user sets the signal bandwidth of the device by adding a capacitor. This filtering improves measurement resolution and helps prevent aliasing. The device can measure the static acceleration of gravity in tilt-sensing applications, as well as dynamic acceleration resulting from motion, shock, or vibration.

As we’ve seen, sensors play a critical role in many medical applications and more are coming based on the trend toward miniaturization that is taking place. Moving from a pacemaker that was incredibly large to those that fit inside the heart is an amazing feat, combining advances in medicine and sensor technology.

While small does not always translate into cost effective, it does usually translate into highly integrated with no loss of performance, which is important in medical applications where size, ease of use, portability, reliability, accuracy, and cost are paramount.

For more information about the sensors discussed in this article, use the links provided to access product pages on the Hotenda website.