Sensor technology advances including products from Honeywell and Texas Instruments being driven by military applications and their vast amount of data.


According to a recent research report from the Freedonia Group,¹ U.S. sales of sensors are forecast to climb at a 6.1 percent annual rate through 2016 to $14.9 billion. The study forecasts that chemical property sensors and proximity and positioning sensors will post the fastest growth. These all are sensors that are heavily used in the military sector.

Sensors used in bomb and biological agent detection and surveillance continue to protect the military, as well as the civilian populace, and the technology employed is moving rapidly into nonmilitary applications such as automotive, medical, and consumer markets. However, while this means the research and development involved is benefitting a wide variety of users, the results are decidedly mixed. At the same time that detection and analysis capabilities are dramatically improving, with real-time systems now employing data streaming, massive storage, and advanced pattern recognition, the military and its vertical market offshoots are literally drowning in data. It is the analysis – making sense of all of the data – that sometimes lags the collection capability.

To counteract this trend, the military has created a Sensing Information Analysis Center (SENSIAC), which is under the Department of Defense (DOD) Information Analysis Center (IAC). In addition to nuclear, biological, and chemical sensing, it specializes in infrared, electro-optical, laser, radar, and acoustical measures and countermeasures as well as electronic warfare and data fusion. SENSIAC spends approximately $3 billion annually in research, and its research results are available to all branches of the military, as well as to industry.

Advancements in areas like biological agent and bomb-detection have been prodigious. For example, the U.S. Army Research Laboratory and private industry jumped in to develop such cost-effective solutions based on sensor technology as the Edgewood Chemical and Biological Center’s Tactical Biological Detector. TAC-BIO is a UV, LED-based biological agent device that, when compared to other detector solutions, is said to cost nearly 10 percent less, is 50 percent smaller, weighs 80 percent less, and has only 4 percent of the energy consumption. It continues to spawn additional sensor/LED combo projects in the private sector. One such capability is seen in JKL Components CCFL lamps (Figure 1) that provide the low-power illumination UV CCFLs used to trace bomb-making materials. 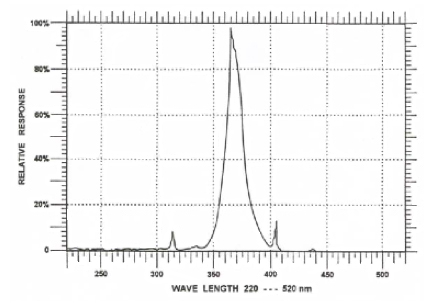 
Night-vision sensors based on sensor fusion and advances in signal processing are also joining the military’s arsenal. Sensors that amplify available light combine digital, analog, and networking circuitry to produce real-time results. Digital sensors used today for night-vision applications include long-wave infrared (LWIR) sensors that work with their analog cousins in a move to save battery power and harness the attributes of several technologies.

Used in applications such as night-vision optics, laser rangefinders, and antenna positioning, the Honeywell HMC6343 three-axis compass (Figure 2) with algorithms module includes firmware for heading computation and calibration for magnetic distortion. The three-axis magneto-resistive sensors and three-axis MEMS accelerometers combine with analog and digital support circuits, an MPU and appropriate algorithms to form a complete and ready-to-use tilt-compensated compass. 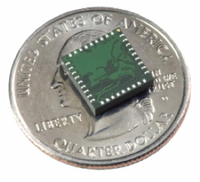 Night-vision solutions may use analog-to-digital conversion (ADC) capabilities to digitize collected information and share it immediately with digital maps, drones, and other resources. Another option is the all-digital solution based on a solid-state silicon IC with a sensor that is sensitive even in low light. Moreover, as shown in Figure 3, sensors can be used with laser weapons in thermal overload surveillance situations. 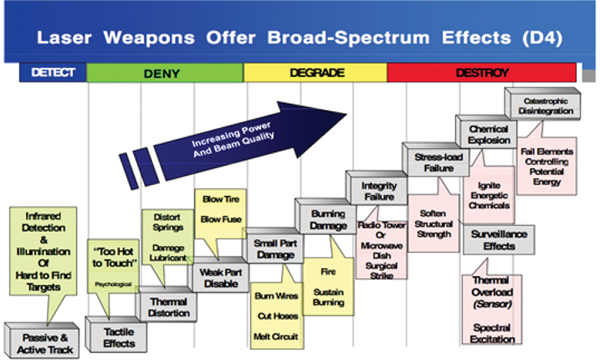 Figure 3: Sensors are used within the laser weapons category in a thermal overload surveillance capacity.
Interest in unmanned surveillance aircraft – drones – is burgeoning as well. Unmanned vehicles (UVM) must perform several functions simultaneously: they must monitor systems, interface with sensors regarding input for ground movement or flight control, and gather data from IR, video, and ranging sensors (Figure 4). 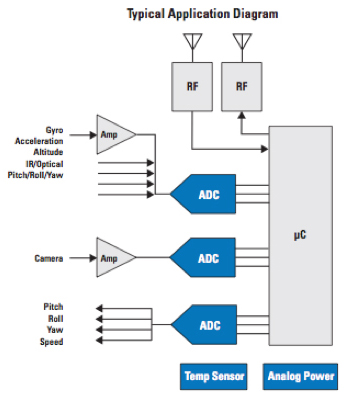 
An ADC that can be used in the UMV depicted in Figure 4 is the Texas Instruments ADC121S021, a low-power, single-channel CMOS 12-bit ADC with high-speed serial interface. Applications include remote data acquisition and instrumentation and control systems. Also part of the UMV is the Texas Instruments LM27, a precision, single digital-output, low-power thermostat with an internal reference, DAC, temperature sensor and comparator.

Electro-optic and infrared (IR) sensors can gather useful high-resolution still and video images. Digital low-light CMOS-based images are replacing analog I2 tube technology and lead in advancements compared with their IR competitors –although the gap is closing. The combination of CMOS and image processing enables military use under all environmental conditions. Often, advancements are driven by a breakthrough in one area of technology, but here that is not really the case as size, weight, materials, processing requirements, and power factors are all in play, with each having a critical role.

Infrared sensors by Honeywell, such as the HOA0961-N51 Transmissive Optoschmitt Sensor (Figure 5), consist of an infrared emitting diode facing an Optoschmitt detector. Detector switching takes place whenever an opaque object passes through the slot between emitter and detector. The HOA096X-7X series employs an opaque poly-sulfone housing with aperture openings for applications where maximum rejection of ambient light is important and in situations in which maximum position resolution is desired, as with most military uses. 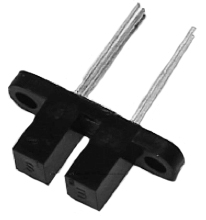 Figure 5: The HOA096x/7x series consists of an infrared diode and Optoschmitt detector.


Sensors used in military applications deal with a vast amount of data and as a result, the military is seeking a single data stream that can combine video feeds from drones, cell phone intercepts, and targeting radar. In 2011, the Defense Advanced Research Projects Agency (DARPA) began to search out a mathematical language that is able to weed through and communicate all of the data that the sensors are collecting, and, in this way, help the agency respond to threats. The program, called the “Mathematics of Sensing, Exploitation, and Execution,” seeks proposals that formulate and develop new mathematical principles underpinning a unified approach to sensor data collection, analysis, and follow-on action. Several companies and universities in the U.S. currently are working with grants from DARPA covering linguistics and analysis in an attempt to find solutions that turn the vast amounts of sensor data now available in military applications into useful, practical, and actionable information.