A look at mid-power LEDs based on ceramic substrates from suppliers including Philips Lumileds, Seoul Semiconductor, and Cree.


An entire product and manufacturing infrastructure was built at the start of this decade in anticipation of demand from TV manufacturers for LED backlighting. TV makers were under extreme price pressure from consumers and demanded the LED makers came up with inexpensive backlighting solutions. (See TechZone article “LED Backlighting Enhances LCD TV Picture Quality.”) To support the nascent LED TV sector, the LED makers more than doubled manufacturing capacity and added a similar level of support for the plastic packaging used to mount the backlighting LEDs.

It turned out that the LED TV makers did not need quite as many of these cheap LEDs as anticipated leading to significant industry overcapacity. Faced with a glut of products, the LED manufacturers promoted “mid-power” plastic-packaged LEDs to lighting manufacturers. The companies argued that their mid-power packages offered designers a less expensive option for general lighting than the high-end devices that traditionally catered to mainstream illumination.

However, like with most electronics components, there was something of a trade-off between price and durability. At the high temperatures typically experienced by LEDs used for lighting, the very plastic packaging that reduced the cost of the device was also a source of degradation. This degradation could result in poor lumen maintenance, leading to shorter LED life and chromaticity shift. To counter the problems a major manufacturer is now introducing mid-power LEDs based on ceramic substrates.

This article provides an overview of the mid-power LED sector with examples of plastic- and ceramic-packaged devices from leading LED vendors.

Industry overcapacity has encouraged manufacturers of mid-power LEDs to promote the devices for low- to medium-cost general lighting applications. The devices are a good option for this target market because mid-power devices match the output, in terms of both luminosity and light quality, of the high-power LEDs of only a few years ago but at a much-lower price. While there is no industry definition of mid-power (as it is essentially a moving target), contemporary devices typically feature input currents of 30 to 150 mA, luminosities of 30 to 110 lumens, and efficacies up to 130 lm/W. 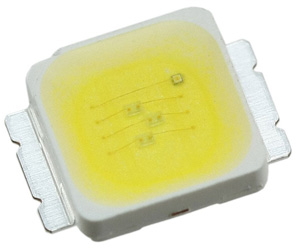 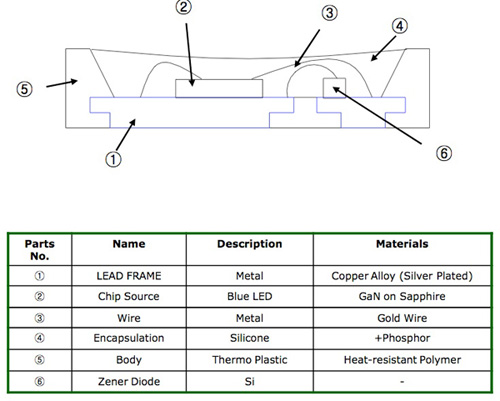 While mid-power LEDs are a proven solutions for general lighting applications design, there is something of a trade-off between price and longevity for these plastic-packaged chips.

Although PPA is designed to withstand high temperatures (it is a thermoplastic resin often used for electrical connector housings in high-temperature automotive applications such as under the hood), ambient conditions inside a lighting fixture can push the material to its limit.

When PPA is new it forms a bright white surface that reflects emitted photons well from the sidewalls of the package cavity (in addition to the photons that travel directly from the LED die through the phosphor). However, the effects of high temperature over time cause the white surfaces to discolor and darken. Moreover, the blue photons emitted from the LED chips cause additional discoloration of the PPA surface. Over time the sidewalls lose their reflectivity and begin to absorb light, leading to lower luminosity.

The discoloration of the plastic package has an additional affect on light quality. Light is emitted from the LED chip directly through the phosphor, as well as being reflected internally off of the package walls. The “mean free path” of photons escaping directly through the phosphor is shorter than that of reflected photons. Thus, the color of the directly emitted photons is bluer (“cooler”) than the reflected light. However, when the PPA discolors, more light is absorbed by the sidewalls reducing the “warm” component of the emitted white light. The result is a significant shift in chromaticity towards the cool end of the spectrum. (See the TechZone article “Thermal Effects on White LED Chromaticity.”)

The combination of these two effects can cause the “L70” lifetime of mid-power LEDs (the number of hours of operation before the luminosity decreases to less than 70 percent of that when new) to fall to as low as 20,000 hours according to leading LED maker Cree. In comparison, L70 lifetimes for high-brightness LEDs are typically in the 50,000 to 75,000 hour range.

The ceramic substrates used in the construction of high-power LEDs ensure that they do not suffer from the same lumen depreciation and chromaticity shift problems as plastic-packaged mid-power chips. This is because the ceramic substrate is not used as a reflective surface; only the light emitted directly from the LED chip escapes from the device through the silicone lens. (Figure 3 showing a Philips Lumileds LUXEON Rebel high-power LED.) 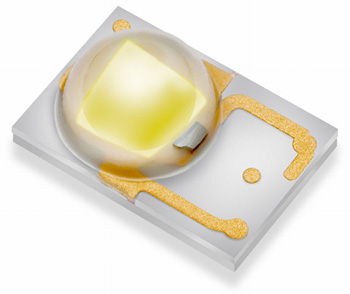 A recent addition to the market that claims to offer a cost-effective mid-power LED solution without the potential downsides of plastic substrates comes from Cree. The company says that its XLamp XH series LEDs replace the plastic package with the ceramic substrate typical of more expensive high-power LEDs. Consequently, this mid-power LED does not suffer from the lumen depreciation of plastic-packaged alternatives and offers the L70 lifetimes typical of high-end devices.

According to analysts Strategies Unlimited, the compound annual growth rate (CAGR) for revenues from LED luminaires in all applications for 2012 to 2016 is 18 percent. The availability of mid-power LEDs for general lighting applications is responsible in large part for the overall reduction in average selling price (ASP) of solid-state lighting that is encouraging the adoption of LEDs for lighting and driving growth in the sector.

These devices are a proven option for applications where cost is a critical factor, but designers should be aware that the products’ lifetimes are unlikely to be as long as more expensive high-power devices that do not employ plastic packages. If lifetime is a key design criterion, ceramic substrate mid-power LEDs claim to offer similar longevity to the more expensive high-power devices.