The Hall-effect produces a potential difference (Hall voltage) across an electrical conductor in which electric current flows in the presence of a magnetic field perpendicular to a current.


The Hall-effect produces a potential difference (Hall voltage) across an electrical conductor in which electric current flows in the presence of a magnetic field perpendicular to a current. While the effect has been known for more than a century, advances in semiconductor technology are driving the adoption of Hall-effect sensing in applications including contactless sensing such as low-power battery-operated portable electronics. With the combination of advances in integration, low power and bounce-free solid-state reliability, Hall-effect sensor ICs are now giving traditional reed and electromechanical switches a run for their money in consumer applications such as cell phones, digital cameras, and tablets.

Before proceeding, let us first explain what “omnipolar” means. Traditionally, there are four types of Hall-effect sensor ICs: unipolar, bipolar, omnipolar, and latches. 1 Omnipolar will turn on when either a north magnetic pole or south magnetic pole of sufficient field is applied to the device. In other words, the omnipolar Hall-effect sensor is designed to be magnetic-field-polarity independent. So, the sensor turns on when a single magnet presents a magnetic field of sufficient strength, and turns off when the field is removed. It remains in the off state until the magnetic field, measured in gauss (G) or tesla (T), is presented again.

Depending on the design, when the sensor is turned on, the resulting output signal can be at logic high (up to full supply voltage, VCC) or logic low (at the output transistor saturation voltage, VOUT(sat), usually <200 mV). An omnipolar sensor turns off in a moderate magnetic field, and the resulting output signal is the opposite of the polarity in the on state, as shown in Figure 1. In this Figure, BOP is magnetic operate point and BRP is magnetic release point. And the magnetic switch-point hysteresis BHYS = | BOP − BRP |. 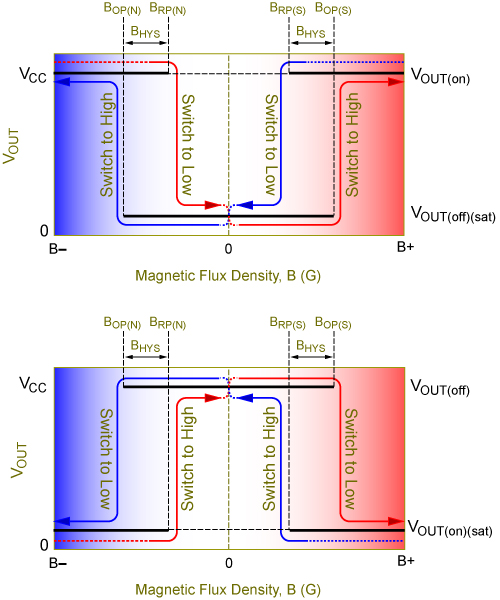 Figure 1: This omnipolar Hall-effect switch output characteristics show that the sensor can be designed to switch to logic high (top panel) or logic low (bottom panel) in the presence of a strong magnetic field. (Source: Allegro MicroSystems.)

In Figure 1, the switch-point range of the omnipolar sensor is symmetrical around the neutral field, which in this case is B = 0 G. The switch points are at equivalent fields, but at opposite polarities. Like other types of Hall-effect digital ICs, these devices do not switch while the magnetic field strength is in the switch-point hysteresis range, BHYS. In addition, latching the switch state prevents the device from switching while the magnetic field is relatively weak, between the release points, BRP(N) and BRP(S). It is not necessary for the 0 G point to be crossed before switching can occur again. A given switching event can be followed by a switching event of either the same or the opposite polarity.

Depending on the design, the omnipolar sensor output characteristics show that the Hall-effect sensor IC can switch either to a logic high (top panel) or a logic low (bottom panel) in the presence of a strong magnetic field. Also, by not requiring the identification of magnet property, these devices allow easier installation to further reduce manufacturing cost.

Allegro MicroSystems continues to improve its product portfolio to be suitable for portable devices. For example, it is lowering operating voltage and reducing power consumption from a wafer level chip scale package (CSP) in its Hall-effect omnipolar sensor ICs, with digital output.

The operating supply voltage for Allegro’s A1172 (see Figure 2) with latched digital outputs is 1.65 Vdc to 3.5 Vdc. With reduced average operating current, the power requirements are less than 15 μW with a 2.75-Vdc supply. The magnetic operating point for the sensor BOP is ±32 G, while the release point BRP is ±26 G. 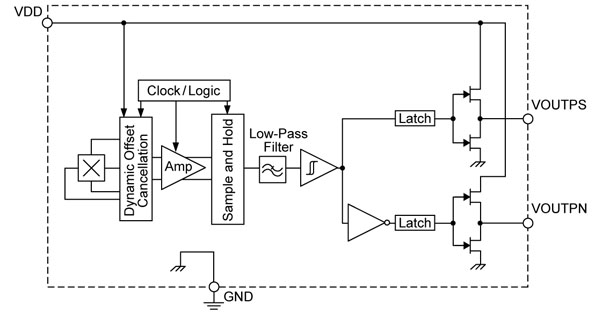 Figure 2: The single-chip A1172 from Allegro includes a Hall-voltage generator, a small signal amplifier, chopper stabilization, a latch, and a MOSFET output. In fact, it offers two complementary outputs.

Hence, for a fixed magnetic field, one output will be in a high-voltage state and the other in a low-voltage state. The advantage of complementary, push-pull outputs is that it eliminates the need for a pull-up resistor, further reducing power consumption. Improved stability is made possible through dynamic offset cancellation using chopper stabilization, which reduces the residual offset voltage normally caused by device over-molding, temperature dependencies, and thermal stress.

To reduce both external noise and noise generated by the chopper stabilization, the manufacturer strongly recommends the use of an external bypass capacitor in the end application circuit shown in Figure 3. It is connected, in close proximity to the Hall element, between the supply and ground of the device. The typical value for this bypass capacitor is 0.1 μF. 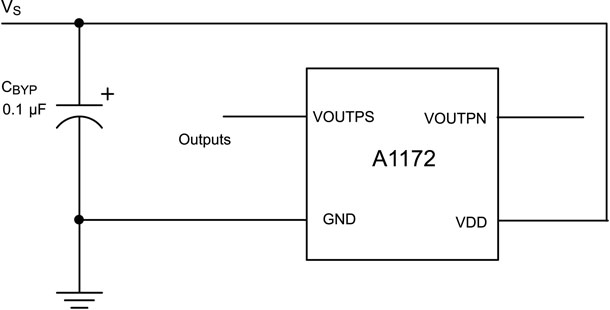 Figure 3: To reduce both external noise and noise generated by the chopper stabilization, Allegro strongly recommends the use of an external bypass capacitor in the end application circuit.

Likewise, Honeywell is exploiting the benefits of BiCMOS design to boost performance and add more features while trimming the die size of its newest micropower omnipolar Hall-effect sensor ICs, labeled the SL353 series. Also, the relatively high sensitivity of these devices permits the use of small and inexpensive magnets to trigger the sensor.

The SL353 series is designed to operate on a supply voltage as low as 2.2 Vdc with very low average current. In fact, there are two members in the SL353 micropower omnipolar Hall-effect position-sensor IC family. While the SL353LT is a low duty cycle version for ultra-low current drain, the SL353HT is a high duty cycle model designed for low current drain and higher switching frequencies.

The SL353HT is tailored for 13 percent duty-cycle designs, offering a drain current of 0.33 mA at 2.8-Vdc supply. Likewise, the SL353LT is tailored for a duty cycle of 0.013 percent with a 1.8-μA drain current from a 2.8-Vdc supply. Typically, the operating supply range for the sensor is 2.2 Vdc to 5.5 Vdc. This wide operating supply-voltage range with minimum of 2.2 Vdc provides flexibility, while helping to reduce the total power consumption.

To provide low average current consumption, the SL353 series incorporates a timer that turns the power to the IC on for a very short time—it is off for the balance of the period—significantly reducing the average current consumption. Typical active mode time is 6 μs. Likewise, the active current is 2.5 mA. When not active, the omnipolar Hall-effect position sensor ICs go into sleep mode to conserve power. In the sleep mode, the current consumption is 1.5 μA. Also, the push-pull output of the sensor IC does not require an external pull-up resistor (Figure 4), which simplifies interface with common electrical circuits, thereby reducing pc-board space and associated cost. 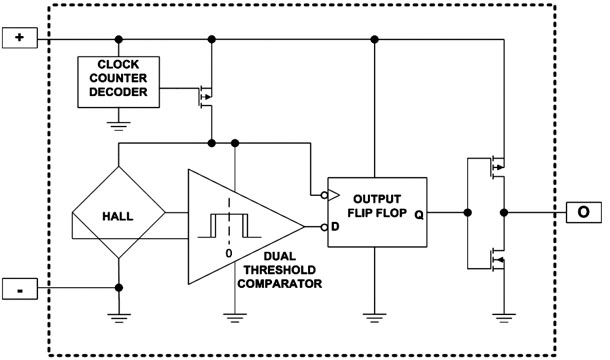 To reduce component parts count and help reduce PCB space and cost, the SL353 series implements a non-chopper stabilized design that requires no filter to compensate for the noise generated by this technique. According to Honeywell, the balanced design of the sensor IC provides stable operation over a wide temperature range of -40 °C to 85 °C (-40 °F to 185 °F).

As with any solid-state device, electrostatic-discharge (ESD) sensitivity is important. The SL353 series sensor ICs are Class 2 ESD sensitive. Hence, appropriate precautions must be taken during assembly operations to prevent potential ESD damage. Also, since the Hall-effect position sensor ICs are sensitive to magnetic fields directly perpendicular to their surface, they can be affected by stray magnetic fields generated by current carrying conductors or magnets in close proximity to the device.

With a typical operating point of ±60 G at 25 °C (77 °F), the SL353 micropower omnipolar Hall-effect sensor ICs comes in SOT-23 subminiature package. The release point for the sensor IC is ±45 G at 25°C. These sensor ICs are supplied on tape and reel which allows for a compact design with automated surface mount component placement and manufacturing, helping to reduce manufacturing costs.