Microcontroller Demand to Bounce Back

The global microcontroller market will post modest growth in 2012, but demand will bounce back once economic conditions improve. 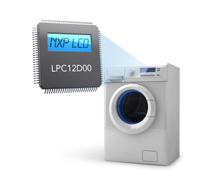 Demand for microcontrollers has been flat to down in 2012, but suppliers believe business will improve next year if the overall economy recovers.

Sluggish demand for MCUs means that leadtimes are mostly stable and there is price pressure on commodity MCUs. There is strong competition for business and the supply scenario probably will not change much over the next two quarters, according to suppliers and industry analysts.

“There's so much competition. It is so fierce, which is very good for customers,” said Tony Keirouz, vice president product marketing and applications, Americas for STMicroelectronics.

There are some “pockets of weakness and some pockets of strength for microcontrollers, but overall the MCU business is flat to down,” added Keirouz. “There is some improvement in Japan, while Europe and Asia-Pacific are struggling. Business in the Americas is flat.”

Some suppliers say business grew in the second quarter, but demand appears to have flattened in the third quarter. While demand may be sluggish, there is strong competition among MCU suppliers for business. 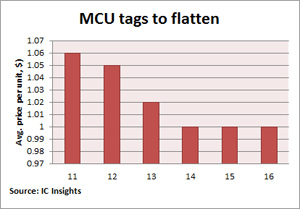 The average price of a microcontroller will decline steadily through 2016.

“Our microcontroller business in the June quarter grew just over 5 percent,” said Ganesh Moorthy, chief operating officer of Microchip Technology, based in Chandler, Ariz. “It was a decent quarterly growth. Our overall guidance in September is flattish.”

Moorthy noted that business is sluggish because there is a degree of “uncertainty on the macroeconomic level relative to what's happening in Europe, China, and of course in the US. All of which have some headwinds on business,” he said.

Some suppliers reported that MCU business has flattened out and is now recovering.

“We feel that Q1 marked the bottom of the cycle,” said Mike Jedrzejewski, senior director of MCU business development at Atmel. “From an end-market perspective, we have seen our largest market – industrial – improve modestly during the second quarter. Our indicators are that it will continue to improve.”

Jedrzejewski noted that microcontrollers are a ubiquitous product that spans many end market segments, adding there was also growth in communications and the tablet/e-reader market.

“What we are seeing is a gradual, consistent uptick in business,” he said. 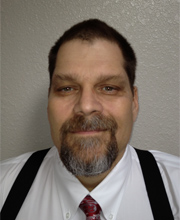 “We feel that Q1 marked the bottom of the cycle,” said Mike Jedrzejewski, senior director of MCU business development at Atmel.While business may be gradually improving, the good news for buyers is that leadtimes are not stretching; they likely will be steady through at least the rest of the year. Many suppliers report 4 to 8 week leadtimes, although some suppliers report eight to 12 week delivery waits.

Leadtimes will likely stay steady as suppliers report they have ample capacity to meet sudden surge in demand, should it occur.

“We have in-house facilities and external facilities, and that is working out very well,” said Jan Jaap Bezemer, director of marketing, microcontroller business line, for Netherlands-based NXP Semiconductors. “It always allows us to be balanced. If there is a pickup in demand, we can rely on our partners to produce more. In times of market decline or temporary slowdown, we can move some demand in-house,” said Bezemer.

Maria Cortez, microcontroller marketing manager for Texas Instruments, said TI has a fab in Richardson, Texas that is not ramped up to full capacity. “It’s very economical for us to run it right now, but the nice thing is that it is scalable to support an additional billion dollars of business,” she said.

Cortez added that TI opened the world’s largest assembly and test facility in the Philippines which could reduce future supply issues.

If supply is constrained “it does not do any good to build a bunch of wafers unless you can test and assemble them. That is a critical part of the manufacturing process,” noted Cortez. 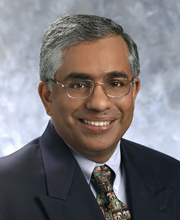 “Our microcontroller business in the June quarter grew just over 5 percent. It was a decent quarterly growth,” said Ganesh Moorthy, chief operating officer of Microchip Technology.Moorthy said that ST has held its production levels and its inventories levels are running a little higher than normal, but inventory at distributors has been reduced dramatically over the last 12 months.

If there is a sharp increase in demand, “our inventory will come down and the channel inventory will go up. We are holding a little higher inventory so we can respond quickly in supply chain,” he said. However, he noted that, overall inventory is in “reasonably good shape.”

Buyers can expect continued price erosion on commodity MCUs, although prices on higher and non-commodity parts will be steady for the rest of the year.

Keirouz said that while the actual prices of non-commodity MCUs may not change much for many products, buyers can expect to get higher performing, lower power, more efficient products “at almost the same price of the previous generation.”

Jedrzejewski of Atmel said portions of the business are under price pressure, while others are maintaining price stability.

“There is a commodity portion of the business which is always under pressure and you'll see prices fluctuate based on market demand,” he said. “Then there's the value-added part of the business where microcontrollers are designed with specific market segments in mind.”

“The value-added MCU business is more proprietary in nature and as a result, it is more insulated from price pressures,” noted Jedrzejewski. 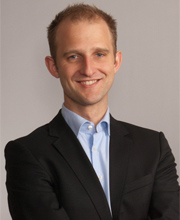 Besides prices, there are other trends buyers should monitor. One is the migration to 32-bit MCUs from 8- and 16-bit devices.

The 32-bit segment became the leading MCU segment in 2010 and in 2012, 43 percent of MCU shipments as measured in dollars will be 32-bit devices, while 4- and 8-bit devices represent 28 percent of the MCU market, according to IC Insights. Sixteen-bit devices had a 29 percent share.

There is strong demand for 32-bit devices in 2012 compared to other MCU segments.

Many 32-bit microcontrollers now use ARM’s Cortex-M cores, including the Cortex-M0, for low-cost designs that compete with 8- and 16-bit MCUs and the Cortex-M3 for 16/32-bit MCUs. The Cortex-M4 is used for MCUs with digital signal processing functionality which are capable of serving as digital signal controllers, according to IC Insights.

Another trend is MCUs equipped with nonvolatile memory. Many MCUs are now embedded with flash memory, but some chips have magneto resistive RAM (MRAM) or ferroelectric RAM (FRAM). 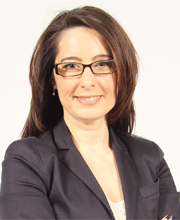 If supply is constrained, “it does not do any good to build a bunch of wafers unless you can test and assemble them. That is a critical part of the manufacturing process,” said Maria Cortez, MCU marketing manager for TI.While microcontrollers are used in a variety of systems including automotive, computer, industrial and medical, there are emerging growth segments that will drive MCU demand.

One driver will be white goods, according to Cortez. Home appliances such as washing machines will ship with more sophisticated electronic capability and will use more MCUs.

“In the past, they may have had one main processor. Now they have capacitive sensing buttons and some are adding wireless capabilities," said Cortez. “The machines will be communicating with energy meters, so they can tell how much energy is being consumed and what it is costing." Such features require MCUs.

Solar energy systems will drive more MCU growth. Solar energy adoption is growing in Europe and Asia. Cortez noted that MCUs help solar systems be more efficient. “One of the things that hurt the deployment of solar energy in the past is energy conversion was not very efficient, " she said. “The systems were bleeding off power that they were collecting. MCUs help systems reduce energy loss.”

Because the average price for MCUs has declined, it has opened up new, non-traditional application. MCUs are now being used in medical patches, toys, audio greeting cards and even plug-in air fresheners, according to Cortez. Such applications use 8- or 16-bit microcontrollers.

Emerging applications and more traditional ones mean that the MCU business will grow for years, often outpacing the overall semiconductor industry.