Most modern consumer electronics use electret condenser microphones (ECMs), also called capacitor or electrostatic microphones, which are assembled from discrete parts. Known for performance, manufacturability, and low cost, the microphones are produced at an estimated rate of more than one billion units annually.

A more recent solution, however, is rapidly taking hold. MEMS microphone solutions differ from the discrete-parts approach. With MEMS, a pressure-sensitive diaphragm is etched onto one silicon chip along with an integrated preamplifier. MEMS design is based on a variable capacitor with a fixed backplate and flexible membrane. As sound pressure deflects the membrane, a change in capacitance results causing voltage change. The sound is captured and converted into a digital signal on one chip, resulting in robust digital output. Available in two flavors, analog and digital, the solution is showing distinct reliability, tolerance, small footprint and height, and integrated signal conditional and A/D conversion advantages.

In a recent report (June 2011), Research and Markets cite the use of multiple MEMS microphones in consumer-application designs as an impetus to rapid growth. While mobile phones use a minimum number to achieve active noise cancellation (ANC), two, four, and six microphones are not unusual for other consumer applications in order to achieve multidirectional functions. In the report, rapid growth is expected to continue and shipments will increase to over 1 billion units by 2013.

IHS iSuppli agrees, forecasting an annual growth rate of 24 percent between 2009 and 2014 (see Figure 1), and citing a breakthrough in the use of noise suppression requiring multiple microphones as well as such new applications as tablets and gaming to fuel rapid adoption.


An example of a digital MEMS microphone is the ADMP421 by Analog Devices, a high-performance, low-power, digital-output bottom-ported omnidirectional MEMS microphone. Small and thin, it consists of a MEMS microphone element and an impedance converter amplifier followed by a modulator. The digital interface allows for the pulse density modulated (PDM) output of two microphones to be time-multiplexed on a single data line using a single clock.

Featuring a high SNR and high sensitivity, a digital MEMS microphone is used in such applications as smartphones and feature phones, teleconferencing systems, digital video cameras, Bluetooth headsets, videophones, and tablets. The ADMP421 (see Figure 2) is available in a thin 3 × 4 × 1-mm surface-mount package. It is halide-free, and reflow-solder compatible with no sensitivity degradation. 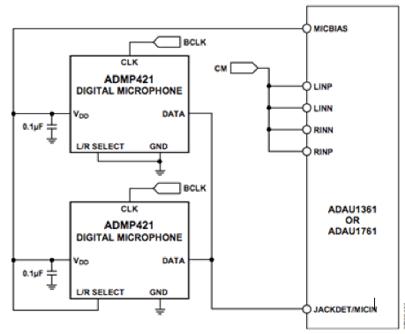 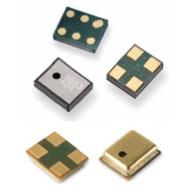 For example, the microphone and related circuitry should not be located near antennas, power amplifiers, motors, hard-disk drives, switching power supplies, or other possible EMI noise sources. The distance or trace length from microphone output to codec input should also be as short as possible to further avoid EMI issues.

The acoustic path design is critical as it guides sound into the microphone. Design can significantly affect the frequency response characteristics of the device. For example, a short, wide acoustic path has a minimal effect. In comparison, a long, narrow path can result in a familiar “tinny” sound.

When designing, check the frequency response of the microphone and acoustic path together and use such adjustments as larger case holes, thinner cases, wider gasket port, shorter acoustic path achieved by mic or case-hole location change, larger or thinner PCB hold, or the addition of a screen or mesh for acoustic resistance.

There are many other design considerations, and the review of the Knowles Acoustic Design Guide/Datasheet may be instrumental in avoiding costly mistakes.

In addition to the typical consumer apps, extensive MEMS microphone research and development is resulting in the delivery of the technology to such fascinating applications as biomedical use. The goal is the wireless monitoring of body sounds, for example, used with apnea patients to monitor breathing sounds, the monitoring of chest sounds post-cardiac surgery, and chest sounds in neonatal care where the miniature sensor size is particularly important.

In addition to biomedical use advances, MEMS microphones are also finding their way into photo-acoustic spectroscopy (PAS) applications. Microphones optimized for use in PAS situations are providing significant system performance improvements as well as improvements in vibration sensitivity, size, ruggedness and ultimately cost improvements for portable PAS systems (see Figure 4). 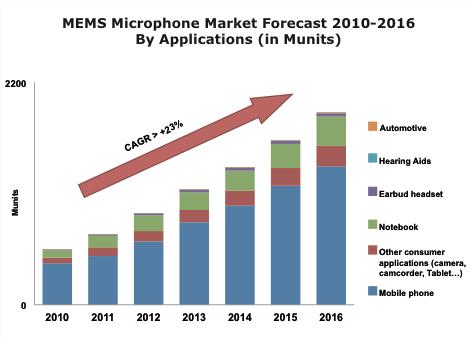 
While the mobile phone market is the main consumer MEMS microphone application and is expected to show continued growth, there is also a dramatic increase in the number of new MEMS microphone products in automotive, other consumer, earbud headsets, hearing aids, notebooks, and automotive.