More MEMS are being designed into cell phones, consumer electronics, and industrial equipment.

Buyers can expect the average price of micro-electromechanical systems (MEMS) to decline over the next four years, resulting in MEMS devices being designed into more consumer electronics and industrial equipment.

The MEMS market, which includes pressure sensors, accelerometers, actuators, and gyroscopes, will grow from $6.2 billion in 2010 to $12 billion in 2015, according to researcher IC Insights, based in Scottsdale, Ariz.

MEMS have long been in used automotive systems for engine control and safety systems, such as airbags. However, because the price for MEMS has declined in recent years, they are being used more often in cell phones, laptops, and consumer electronics equipment, such as video game consoles. Suppliers say there will also be greater growth for MEMS in industrial equipment because the price has declined.

While strong growth is forecast for MEMS devices, the technology has been around and used for years.

"The first applications primarily were in automotive," said Rob Lineback, senior market research analyst at IC Insights. One of the first applications was accelerometers used in airbags, which trigger the airbag to deploy when a car is in an accident. Pressure sensors are also used in vehicle fuel lines to handle the correct mixture of air and gasoline. 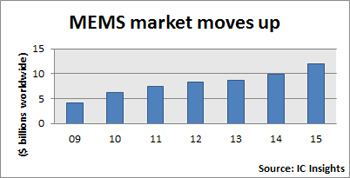 MEMS are used in engine control to maximize the mixture of gas and air to optimize mileage and "make engines more green," said Jim Grothe, marketing manager for MEMS automotive solutions for Freescale. They are also being used for safety features in cars such as stability control and tire pressure monitoring.

"Safety and safety mandates have driven MEMS content ubiquitously throughout the vehicle," said Grothe. "Every car that you buy off the lot today has to have stability control function" which requires the use of MEMS, Grothe said.

Stability control prevents a car from skidding or oversteering through a corner. "Or when you are driving in snow and you push on your brake and try to turn, stability control helps the car steer in the right direction, preventing the car from just going straight," which often happens in snow, noted Grothe.

Tire pressure monitoring, which requires pressure sensors, has also been mandated in North America and that is helping to drive growth.

While MEMS use is approaching saturation in vehicles, there are still opportunities for greater use of MEMS in vehicles.

In high-end cars, MEMS are being used to manage the ride and feel of the car. "In some real high-end cars today, there are comfort-seating type applications, where pressure sensors or load sensors are placed throughout the seats and respond to the contour of your body and make it very comfortable," said Grothe. "Porsche has seats that have 23 sensors in them. It's a wonderful thing."

While MEMS have been used in vehicles for years, they are now being used in consumer equipment, as the cost has come down.

The average price of MEMS has declined and will continue to do so for the next four years."We've seen tremendous growth in cell phones using MEMS technology," said Lineback. "The iPhone uses accelerometers to automatically rotate the display, so if you turn the iPhone horizontally, it rotates the screen so it can be viewed." MEMS are also being used as microphones in cell phones.

"We are seeing these microphone chips replacing the old technology," said Lineback. "They are actually being used now in the iPhone and other cell phones." MEMS chips are also being used in cameras to detect movements and "compensate for shaking hands," added Lineback. Additionally, they are used in laptops and can detect if a laptop is falling. The sensor will then send a signal to the hard drive, shutting it down to avoid damage.

Gyroscope chips are used in the Nintendo Wii and other video game consoles. "A lot of growth has been driven by gaming," said Bill Raasch, vice president product marketing smart power and high performance analog for STMicroelectronics. "The functionality of being able to take motion and interact a handset with a game console has driven a lot of adoption of MEMS and it continues to accelerate."

Industrial equipment is also starting to use more MEMS.

"Our fastest growth is in industrial," said Wayne Meyer, marketing and applications manager, MEMS and sensors technology group for Analog Devices. Analog has been producing MEMS for 20 years. Analog began producing sensors for stability control and airbags in vehicles.

Analog makes a wide range of MEMS including accelerometers, inertial sensors, gyroscopes, and microphones. "But we also have very high performance integrated modules that use our components," Meyer said. "We have a very deep channel."

Meyer noted that MEMS used in industrial applications will post robust growth. "In non-consumer markets for the next five to seven years, we are going to see some extremely large growth in MEMS until it gets to the point where everyone has MEMS in their products," he said.

MEMS will be used in more medical equipment, including "lab on a chip" applications. For instance, some companies are developing equipment in which MEMS are used to do chemical or blood analysis.

Pressure sensors are being used in some white goods to measure water depth.

"In washing machines, pressure sensors can be used as a way to measure water depth. It allows you to very closely monitor how much water you use and how much you have to keep," said Grothe. "The green movement is driving that" because MEMS can be used to conserve water.

Because MEMS will be appearing on bills of materials, buyers should realize that they are not really commodity parts like standard logic or DRAM, said Lineback.

"When a supplier gets a MEMS product designed into a cell phone, the phone is designed specifically with their part," Lineback said. "You can't just take one out and plug in another. It is considered to be kind of a proprietary design win."

MEMS are different than most some semiconductors because they have electromechanical structures that actually have moving parts. They have cantilevers, diaphragms, or micro-mirrors "that flip or swivel, actually move around" and send signals, said Lineback. "You can imagine how tricky it is to build these."