Both in the hospital and in the home, wireless technology is revolutionizing healthcare as new applications appear all the time.


Both in the hospital and in the home, wireless technology is revolutionizing healthcare as new applications appear all the time.

Wireless connectivity is sweeping through the healthcare industry, giving patients more mobility and giving doctors more real-time, realistic information by allowing patients to move around rather than trap them in a bed, encased in a "rat's nest" of wires. There is no single wireless standard adopted by the medical industry. Rather, the industry seems to be embracing all the wireless standards – Bluetooth®, ZigBee®, Wi-Fi® (IEEE 802.11a, b, g, n), RFID, Near-Field Communications (NFC), and more. This article provides an overview of the various approaches to wireless system implementations for a wide variety of healthcare monitoring systems.

In the hospital, the doctor's office, and at home, medical products are going wireless, giving patients more mobility, giving doctors access to records wherever they happen to be, and allowing nurses, doctors, and other healthcare providers to collect and record data while making their rounds (see Figure 1). To link the various data collection tools, data capture tools, and diagnostic systems, designers have a variety of wireless connectivity options. Each option comes with a different set of data transfer speeds, power consumption levels, and operating frequencies. Depending on the application scenario, each wireless standard – Bluetooth, ZigBee, Wi-Fi, NFC, RFID, or simple schemes such as amplitude-shift keying (ASK) or on-off keying (OOK) — has its place in the medical and fitness infrastructure. 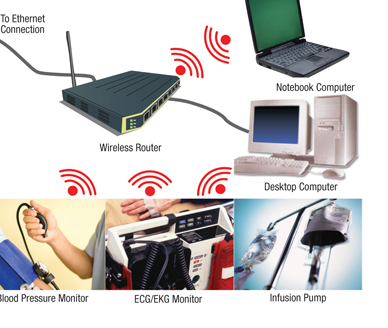 Figure 1: Wireless communications have made many inroads into medical systems. (Source: Microchip Technology. Used with Permission).

Which standard to choose?

For low-cost applications such as "smart" running shoes, simple heart-rate monitors, and other equipment which only require a transmission distance of several yards for the sensor to send a signal to a nearby receiver, low-power schemes like ASK, OOK, or the new low-power Bluetooth or ZigBee schemes would be a good fit.

However, in a hospital environment, Wi-Fi can be used to keep the doctors connected via date-entry/retrieval tablets or other hand-held devices that can be kept in charging cradles when not in use.

In the emerging area of home-care and remote diagnostics, a combination of wireless approaches can be employed to achieve the best coverage while minimizing cost and power. Market researchers at Parks Associates estimate that 7.2 million customers in North America and Europe will be using remote health monitoring by 2012 (up from 500,000 in 2008).

For most medical monitoring and diagnostic tools, data usually comes in small bursts rather than a long, continuous stream. Thus, the more small-packet-oriented wireless approaches, such as Bluetooth and ZigBee, will deliver the desired performance at low-power consumption levels. For very short range applications, ASK and OOK can also transfer data while consuming very little power.

Other RF schemes such as NFC and RFID are also being used to track supplies and medication. For example, inexpensive passive RFID tags can be added to medication bottles or various disposable supplies to track usage and ensure that the correct medications are dispensed. A simple RFID reader or NFC reader is all that is needed to capture the information.

Let's take a look at some of the equipment being designed to take advantage of the various wireless standards, and at some of the chips that designers have implemented to eliminate the cables and give patients more freedom. Blood-oxygen measurements are common for hospital patients and for many people using home-based remote monitoring. Some of the latest pulse oximetery systems are smaller than a smart phone, can run from standard AAA batteries, and incorporate NFC or a Bluetooth wireless interface to transfer collected data to a host system such as a tablet computer, smart phone, or full PC. Recent announcements by Google and NXP Semiconductors have stated that the next generation of Android® smart phones will include NFC capability so that the phones can be used as electronic wallets. However, by just running a different application, the same NFC interface could also be used to collect medical data. 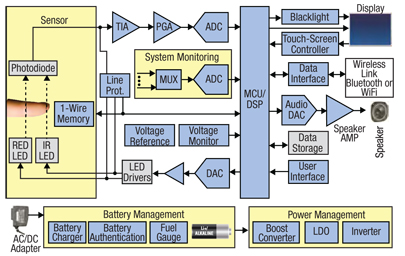 Figure 2: A typical pulse oximetry system, such as defined by Maxim Integrated Products, contains many blocks to sense, collect and display the blood-oxygen levels. A small but important piece of the system is the wireless link implemented using a Bluetooth or WiFi radio. In the future generations, NFC wireless interfaces will also be available. (Souce: Maxim. Used with permission).

The basic functions required in a pulse oximeter are shown in the system block diagram in Figure 2. In such a system, the designers can implement the wireless interface using any of several standards — Bluetooth, Wi-Fi, or NFC. One of the larger suppliers of NFC chips is NXP Semiconductors, offering transceiver chips that operate at 13.56 MHz — the PN511 and the PN512 (see Figure 3). To create a full NFC subsystem, however, the PB511/512 chips are typically combined with a microcontroller, and NXP offers several modules — the PN531, 532, 533, and 544 — that contain both the MCU and the NFC transceivers. Simply by bringing two NFC-enabled devices close together, they automatically initiate network communications without requiring the user to configure the setup. NFC-enabled devices make it easy for users to connect and transfer data.

The transceiver chip includes an 8-bit parallel interface, an SPI serial port, a serial UART (similar to RS232 with voltage levels set by the pad voltage supply), and an I²C interface, any of which can be used to connect the transceiver to the host microcontroller. On-chip analog circuits demodulate and decode responses, and buffered output drivers allow an antenna to be connected with a minimum of external components. The typical operating distance in the read/write mode is up to 50 mm, depending on the antenna size and tuning. The integrated RF interface can transfer data at up to 424 kbits/s in the NFCIP-1 operating mode, and at either 212 or 424 kbits/s in the FeliCa and ISO/IED 14443A transfer modes.

Maxim employs a simple ASK transmitter/receiver in a heart-rate/fitness monitoring system. Designers at Maxim decided on this approach because it offers better sensitivity than a frequency-shift keying approach, and requires little power for data transmission (see Figure 4). Used to link a sensor in an exercise shoe (a running shoe, for example), the transmitter sends its signal less than two meters to a receiver typically worn on the person's waist. A transmitter in a wireless chest-band can also be set up to measure breathing and transmit readings to the receiver. When the exercise period is finished, the receiver can be linked to the PC host via a Bluetooth dongle, or a Bluetooth-capable cell phone or tablet (see Figure 5). 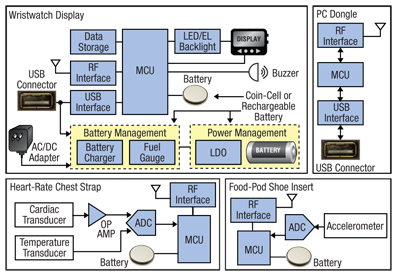 Figure 5: The heart-rate monitor contains several sections-a sensor and transmitter for the running shoe (lower right), a sensor and transmitter for the chest strap (lower left), a receiver that collects all the data and then sends it on to a host computer or a smart phone/tablet (upper left), and host-PC dongle that converts the RF data into a USB data stream (upper right). (Source: Maxim. Used with permission).

In a typical digital hearing aid, the digital signal processor (DSP) can be tuned via the wireless interface to optimize the performance of the hearing aid to the patient. A PC or smart phone running an application can be used by the doctor. If the patient needs several performance profiles and wishes to switch between them, the patient could also control the wireless link to adjust the algorithm (see Figure 6). 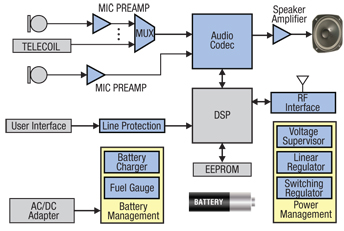 Figure 6: A typical hearing aid can leverage a wireless interface to adjust the DSP algorithms. (Source: Maxim. Used with permission).

The ZigBee wireless standard is also an ideal option for many medical systems since the protocol allows multiple transceivers to form a simple mesh network. In addition, ZigBee devices are very low power since they spend most of their time in a standby or sleep state, typically waking up to transmit a burst of data and then going back to sleep.

One example of a ZigBee transceiver chip is the MRF24J40 from Microchip. The transceiver is compliant with the IEEE 802.15.4 standard and operates at 2.4 GHz. The chip integrates both the PHY and MAC functions, but an external low-power microcontroller is typically paired with the transceiver to complete the node (see Figure 7).

The MRF24J40 and MCU form a low-cost, low-power, low-data-rate (250 or 625 kbps) wireless personal area network (WPAN) node. The MRF24J40 interfaces with many of Microchip's PIC® family microcontrollers via a 4-wire serial SPI interface with interrupt, wake, and reset pins. There are many other vendors offering ZigBee solutions, both at the chip level and at the module level.Several vendors combine the transceiver and MCU on the same chip to further reduce component count. One such solution is the EM351 from Ember. Their chip integrates a programmable ARM® Cortex™-M3 processor along with the RF transceiver, 128 kbytes of flash memory, and 12 kbytes of RAM. Another version of the chip, the EM357, is optimized for applications that require more memory.

Bluetooth solutions, both in chip and module form, are also on the market and available for medical applications. The recently released low-power profile lowers the power consumption of the Bluetooth interface and allows it to compete better in the market for battery-powered systems.

One Bluetooth-based solution, the Saelig Co. CM-500W3, is a small barcode scanner, ideal for nurses and other healthcare providers to use to capture the codes from supplies and medications. The CM-500W is compact (5 x 1.5 x 0.7 in.), lightweight (2 oz.), and features two keys (scan/clear) plus a beeper and LEDs to indicate read status. With a USB cable attached, it becomes a plug & scan scanner. Without the USB cable, it functions as a memory or wireless scanner. As a Bluetooth device, it can be programmed as a master or slave device to allow communication between a Windows PC, a mobile phone, or a PDA for instant or delayed data entry. The CM-500W3's built-in Li-polymer battery pack (3.7 V, 420 mAH) can be recharged via any USB port, and the unit can read up to 15,000 scans before requiring a recharge.