Demand for embedded NOR will increase eight percent this year and seven to nine percent per year over the next four years. 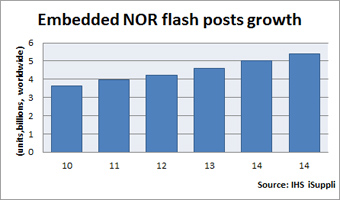 Hard disk drives, media tablets, and e-readers will boost demand for embedded NOR flash memory over the next four years.Shipments of NOR memory chips for embedded applications in 2011 will rise six percent to 3.96 billion units, up from 3.64 billion units in 2010, according to researcher IHS iSuppli.

Media tablets and e-readers represent the fastest-growing sales opportunity for embedded NOR flash.

Tablets and e-book readers will combine to generate the highest sales growth for embedded NOR of any product in 2011 and beyond, Chien noted.

Tablets, such the iPad, and e-readers, such as the Kindle and Nook, will consume 80 million NOR chips this year, up a whopping 196 percent from 27 million units in 2010, according to IHS iSuppli.

Of the 20 embedded NOR product categories tracked by IHS, tablets and e-readers will boast the highest compound annual growth rate (CAGR) for the period from 2010 to 2015, topping out at 53 percent.

The second fastest-growing embedded NOR segment during this period will be Bluetooth, with a five-year CAGR of 16 percent. Tied for third will be automotive and gaming, at 10 percent each, IHS iSuppli reported.