A look at MCUs with high resolution graphics control including products from Atmel, Texas Instruments, NXP, and Embedded Artists.


The human-machine interface, once simply known as an “operator panel” or “terminal”, is changing rapidly, due to the graphical, visual way operators now interact with an industrial machine or process. At one time, designers of these systems could get by with a three-line segmented LCD display. Today, LCD interfaces are quickly replacing traditional LED and segment LCD displays as designers take advantage of the aesthetic, flexibility, and cost benefits they provide.

Beyond that, high-resolution LCDs are becoming the norm, which should not be surprising when one considers that when the operator of industrial equipment goes home these days, his or her 9-year old daughter does homework on a high-res display iPad or Android tablet. One can see that working with a monochrome readout attached to a million-dollar piece of industrial machinery can quickly become unsatisfactory. And more importantly, management also has come to recognize that high-res visual displays can go a long way toward increasing the efficiency and productivity of both man and machine. This article will look into microcontrollers with graphics control, placing particular emphasis on those that can handle high-resolution displays.

Most LCD panel interfaces are LVDS (6 or 8 bits). Following are common display resolutions accompanied by their picture width/height ratios.


Before we explore the parts designed to control these visual devices, let’s take a look at an example industrial touchscreen display. The Touch Revolution F10A-0102 is an 8.8 in. 1024 × 600 resolution display with an LVDS interface and projected capacitive touch. It takes 12 to 20 mA from a 5 V supply and has a 45 degree viewing angle. The company’s Fusion touch displays include an integrated touch-controller system mounted directly on the flex tail (Chip on Flex). The Fusion controller runs Touch Revolution’s proprietary firmware, capable of tracking at least two unambiguous touch points with a high report rate.

Some MCUs with high-res graphics control

Now let’s look at three good examples of microcontrollers that have a high-res graphics interface.

The ATSAMA5D334 from Atmel (Figure 1) is a power-efficient embedded processor based on a 536 MHz Cortex™-A5 core. The chip achieves 166 MHz system bandwidth with power consumption below 0.5 mW in low-power mode. It features a floating-point unit and a multilayer internal bus architecture associated with 39 DMA channels. The chip has no internal program memory and supports DDR2/LPDDR/LPDDR2 and MLC NAND Flash with 24-bit ECC.

The IC’s LCD controller supports overlays for hardware-accelerated image composition, a touchscreen interface, and a CMOS sensor interface. The controller has overlay, alpha-blending, rotation, scaling, and color-space conversion. To set up these facets, the IC has 177 control registers. It supports a scan-active TFT display, up to 2048 × 2048 resolution, with 12-, 16-, 18-, and 24-bit output modes through the spatial dithering unit, 1, 2, 4, 8 bits/pixel (palletized), 12, 16, 18, 19, 24, 25, and 32 bits/pixel (non-palletized), and one hardware cursor.


Communication peripherals include a gigabit EMAC with IEEE-1588, (a 10/100 EMAC in the SAMA5D31), CAN, UART, SPI, and I²C. It features a secure boot mechanism, hardware-accelerated encryption (AES, TDES), and hash function (SHA).

The 324-ball LFBGA packaged IC is optimized for control-panel/HMI and applications that require high levels of connectivity in industrial and consumer designs. Its low power consumption makes it particularly suited for battery-powered devices. The chip takes 88 mA at 400 MHz in full operation and 432 μA at 32 kHz in ultra-low-power mode.

The Texas Instruments AM3359 is a graphics powerhouse with a 720 MHz Sitara Cortex-A8 core, high-res graphics, and resistive touch control. The chip has no Flash with a 176 Kbyte boot ROM and 32 Kbyte L1 instruction and data caches, along with a 256 Kbyte L2 cache. It has a DDR2, DDR3, DDR3L external-memory interface.

The chip’s LCD controller provides up to 24-bits data output, 8-bits/pixel (RGB), and resolution up to 2048 × 2048. The device has two independent controllers, the Raster Controller and the LCD Interface Display Driver (LIDD) controller. Each controller operates independently from the other and only one of them is active at any given time. The IC supports passive- and active-matrix LCD displays and features a DMA engine to pull data from the external frame buffer without burdening the processor via interrupts. The IC also has an SGX530 3D-graphics engine.

TI’s TMDSSK3358 development kit (Fig. 2) is a great way to look at potential AM3359 designs. The general-purpose EVM is a standalone test, development, and evaluation module system that enables developers to write software and develop hardware around an AM335x processor subsystem.

Figure 2: Texas Instruments offers the TMDSSK3358 development kit for the AM3359.


The main elements of the AM335x subsystem are already available on the base board of the EVM, which gives developers the basic resources needed for most general-purpose-type projects that encompass the AM335x as the main processor. Additional typical-type peripherals are built into the EVM such as memory, sensors, LCD, Ethernet PHY, and more so that prospective systems can be modeled quickly without significant additional hardware resources.

The LPC4357FET256 microcontroller from NXP Semiconductors (Fig. 3) seems to have everything one would desire in many applications. It has 204 MHz Cortex-M4 and Cortex-M0 processors and 1 Mbyte of Flash. The IC’s LCD controller has DMA support and a programmable display resolution of up to 1024 × 768. It supports monochrome and color STN panels and TFT color panels and has a 1/2/4/8-bits/pixel color look-up table and 16/24-bit direct-pixel mapping. 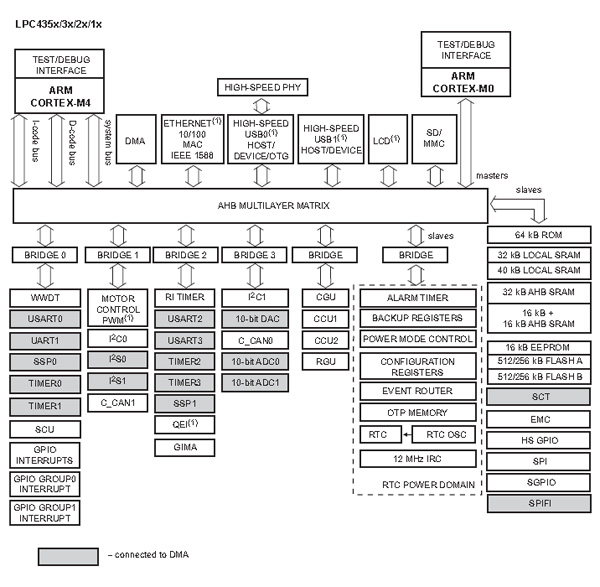 Figure 3: Block diagram of the two-core LPC4357FET256, which has graphics control and 1 Mbyte of Flash.


The Cortex-M4 features a memory protection unit supporting eight regions, hardware floating-point unit, a non-maskable interrupt input, and JTAG and serial wire debug. Also, there is a 10/100T Ethernet MAC with RMII and MII interfaces, a CAN port, two USB 2.0 interfaces, 136 Kbytes of SRAM, two separate SRAM blocks of 32 Kbytes each, and a quad-lane SPI Flash interface. It has dual 10-bit A/D converters and a single 10-bit D/A. Supply current for this chip is about 45 mA at 120 MHz with a 2.2 to 3.6 V supply, without peripherals, and it comes in a 17 × 17 mm package.

The use of graphical displays and menus has become the preferred method for implementing modern user interfaces, offering flexibility for customization and to accommodate a vast number of use cases. As we have seen, MCUs are available with integrated graphics controllers that can drive high-resolution LCDs and suppliers now offer their customers dev kits and access to a robust graphics library and/or third-party GUI development tools that can greatly simplify their design and accelerate time to market.