This article looks at the role of Microcontrollers (MCUs) in industrial automation, specifically examining how they provide the real-world interface to sensors and actuators.

This article looks at the role of Microcontrollers (MCUs) in industrial automation, specifically examining how they provide the real-world interface to sensors and actuators. It discusses the need for integrating high-performance cores like ARM®’s Cortex™-M3 with precision and dedicated peripherals such as those found on Analog Devices’ ADuCM360 and Energy Micro's EMF32 family. It also examines a relatively new protocol which targets this application area, with specific reference to low-end MCUs including Infineon’s XC800 and XC16x families and Texas Instruments’ MSP430F2274, as well as looking at dedicated transceivers including Maxim’s MAX14821.

Microcontrollers integrate an increasing level of mixed-signal capability and processing power, but other developments are extending the lifecycle of low-end microcontrollers.

By definition, microcontrollers (MCUs) are redundant without an interface to the ‘real world’. They were designed to act as a hub for inputs and outputs, executing conditional responses and managing sequential and parallel processes. Their role is defined by control, while their programmable nature means that control is managed by logic. However, they are fundamentally designed as interfaces to the analog world, and therefore rely heavily on analog/digital conversion. Often it is the digital representation of an analog parameter — typically derived from a sensor of some sort — that drives the control process and that is no more apparent than in an automation application. The ability to control large and complex mechanical systems using a small and relatively inexpensive piece of silicon has promoted MCUs to a position of extreme importance in the industrial automation domain and, not surprisingly, has encouraged many vendors to target this space with their MCU families.

Commercial pressures mean that the data conversion process that is key to their operation must be cost-effectively handled on-chip, giving rise to an increased level of mixed signal integration. Moreover, as the level of integration increases, so too does the processing burden placed on the core.

Their low cost and flexibility means MCUs are often used liberally, but manufacturers in all sectors are now striving to consolidate functions, for either cost, complexity or safety reasons; where once there may have been tens of MCUs, there may now be only one.

It is not surprising, therefore, that what started out as simple 4-bit devices have evolved into highly sophisticated 32-bit processing engines, with the ARM Cortex-M family becoming the core of choice among many vendors.

Mixing a high-performance processing core with accurate and stable analog conversion is not simple. CMOS lends itself well to high speed digital, but instantiating sensitive analog peripherals can be a challenge. One company that has extensive expertise in this area is Analog Devices. Its ADuCM family of fully integrated data acquisition systems has been designed to interface directly to precision analog sensors. This approach does not just minimize component count but also preserves accuracy by eliminating an analog and/or digital stage.

The converter implemented on the ARM Cortex-M3 based ADuCM360, for example, is a 24-bit Sigma Delta ADC, which forms part of the device’s analog subsystem. Included are a programmable current excitation source and a bias voltage generator, but more crucial are the internal filters, one of which is used for precision measurements and one for fast measurement, suitable for detecting large changes in the source signal.

MCU manufacturers appreciate the important role sensors play in automation and are beginning to develop optimized analog front-ends that provide a dedicated interface to inductive, capacitive and resistive sensors.

Some of these front-ends are even designed to run autonomously, such as the LESENSE (Low Energy Sensor) interface in Energy Micro’s family of ultra-low power MCUs. It comprises analog comparators, a DAC (digital to analog converter) and a low power sequencer, allowing it to be configured by the MCU’s core but then operated while the rest of the device is in a deep-sleep mode.

The sequencer runs from a 32 kHz clock and controls activity, while the comparator outputs can be configured as interrupts to wake the CPU and the DAC can be selected as a comparator reference and excitation source. The LESENSE technology also includes a configurable decoder, which can be configured to generate an interrupt only when several sensor conditions are met at the same time. Hotenda supplies Energy Micro’s EFM32 Tiny Gecko Starter Kit, which includes an LESENSE demonstration. The Tiny Gecko family of MCUs from Energy Micro is based on the ARM Cortex-M3, which runs at up to 32 MHz and targets the industrial automation application areas of temperature, vibration, pressure, and motion sensing. 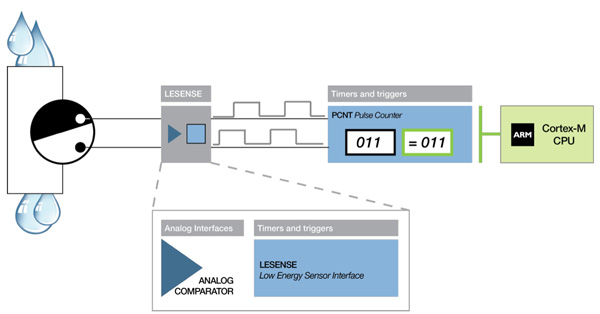 The introduction of a powerful new sensor and actuator interface is helping many manufacturers extend the usable lifetime of 8- and 16-bit devices in the industrial automation arena. The protocol behind the interface is called IO-Link and is already being supported by a number of leaders in the industrial automation sector, particularly MCU providers.

IO-Link uses a 3-wire unshielded cable, which can span up to 20 meters, making it suitable for retrofitting intelligent sensors and actuators into existing installations. It requires ‘intelligence’ at each end, typically implemented in an MCU, but as the protocol is relatively simple, it can be accommodated in a low cost 8-bit MCU and this is exactly what many manufacturers are now exploiting.

The protocol (also known as SDCI, which stands for Single-drop Digital Communication Interface, and is standardized under the IEC 61131-9 specification) has been developed as a point-to-point communication solution that can be easily embedded within sensors and actuators, giving them a level of ‘intelligence’. As such, it is not intended to replace existing communication layers, like Fieldbus, Profinet, or HART, but instead work alongside them by making it easier for low-cost MCUs to interface to high precision sensors and actuators.

The consortium behind IO-Link believes it can significantly reduce system complexity, as well as introduce useful features such as live diagnostics through parametric monitoring. When integrated within a Fieldbus topology through a gateway (again, implemented through either an MCU or PLC), complex systems can be monitored and managed centrally from a control room. Sensors can be configured remotely, partly because sensors that comply with the IO-Link specification know a lot more about themselves than ‘regular’ sensors.

Primarily, their identity (and the manufacturer’s) is embedded within the sensor in XML form, available upon interrogation. This allows a system to instantly innumerate a sensor, and understand what it can contribute to the system. But, more significantly, IO-Link enables sensors (and actuators) to provide a continuous stream of real-time data to the controller. In fact, the IO-Link provides for three types of data to be exchanged: process data, service data, and events. Process data is transmitted cyclically, while service data is exchanged acyclically and always on request by the IO-Link Master. Service data can be used to read and write parameter data from/to the device. 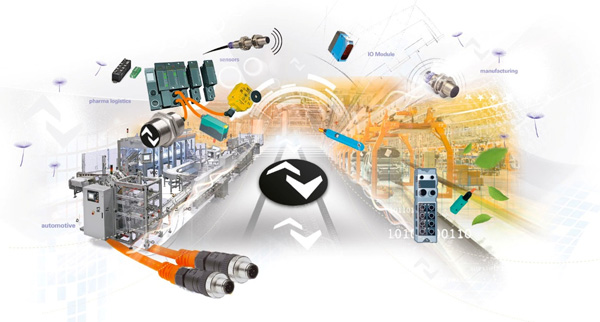 A number of MCU vendors have joined the IO-Link consortium, which recently became a Technical Committee (TC6) within PI (PROFIBUS & PROFINET International). Fundamentally, IO-Link provides a standardized method for controllers (including MCUs and PLCs) to identify, control and generally communicate with sensors and actuators that employ the protocol. The list of manufacturers providing compliant devices is growing, as is support from MCU makers.

Part of that support is coming from specialists, such as Mesco Engineering, a German-based design house that is working with a number of semiconductor manufacturers to develop IO-Link solutions. Its list of partners includes Infineon, STMicroelectronics, Atmel, and Texas Instruments. For example, Infineon has ported the IO-Link stack from Mesco to its XC800, an 8051-compatible 8-bit MCU providing intelligence at the device (sensor/actuator) end of the link, while Infineon is providing support for an IO-Link Master using its 16-bit devices, including the XE16x.

Mesco’s stack has also been ported to Texas Instruments’ low power MSP430 family; another 16-bit MCU based on a proprietary core. Specifically, it targets the MSP430F2274.

Manufacturers are also working on developing a range of discrete IO-Link transceivers, such as the MAX14821 from Maxim. This transceiver targets IO-Link devices and 24 V binary sensors/actuators and acts as a physical layer interface to an MCU running the datalink layer protocol (Figure 3). Two internal linear regulators generate common sensor and actuator power requirements at 5 V and 3.3 V, and the device is configured and monitored through a SPI interface. It also features an IO transceiver interface capable of operating with voltages up to 36 V.

It seems likely that as IO-Link achieves a greater level of penetration, more manufacturers will integrate those physical interfaces with the other specialized peripherals present on MCUs targeting industrial automation applications. Renesas has already created a range of dedicated IO-Link master/slave controllers based on its 78 K 16-bit MCU core.

Industrial automation has always been dependent on the combination of measurement and control. While an increasing level of networking has been introduced over recent years, the interface between the digital and analog domain has remained relatively unchanged. With the introduction of IO-Link, however, sensors and actuators are now being developed that are able to interface to MCUs in a more sophisticated way. The point-to-point connection provides not only a simpler way of interfacing to control elements, but also an effective way to extend the capability of low-end MCUs.