Advantages and drawbacks of higher drive currents for LEDs including the effect on reliability, efficacy, luminosity, chromaticity, design complexity and cost.


In the early days of LED technology, engineers were advised to limit the drive current to LEDs in order to keep junction temperatures down, in turn prolonging the life of the device and maximizing efficacy.

But while it’s true that higher junction temperatures do compromise longevity, there’s a growing body of evidence from LM-79, LM-80, and TM-21 testing that modern LEDs can still exhibit 60,000 hours lifetime (L70) at temperatures that would have quickly killed older devices. Moreover, because modern chips produce outputs that were unthinkable a decade ago, many designers question why low drive currents are still appropriate when this means using only a fraction of the LED’s output. Higher drive currents, it is argued, would use more of the chip’s capability and allow fewer chips to be used for a given output, lowering system costs and simplifying design.

This article describes the advantages and drawbacks of higher drive currents for LEDs by examining the effect on reliability, efficacy, luminosity, chromaticity, design complexity, and cost.

Turning up the wick

In the early days of high-brightness LEDs, manufacturers recommended a forward current of 280 mA, and later 350 mA became something of a de facto standard for solid-state products. The choice of both 280 and 350 mA was somewhat arbitrary, although at the higher current, a 1 mm² chip typically dissipates a nominal 1 W (the actual dissipation is actually closer to 1.25 W), which was considered to generate the maximum amount of heat that could be easily removed from the junction region.

However, few engineers realize that high-brightness LEDs reach their peak efficacy at just a few to a few tens of milliamps. A trend to higher currents therefore seems somewhat counter-intuitive for an industry that has been obsessed with efficacy (lm/W) for over a decade. Figure 1 illustrates the relationship between efficiency (note the graph exhibits efficiency [power out/power in] rather than efficacy [lm/W]) and forward current for a white LED at a selection of voltages. The efficiency peaks at 85 percent at 4 to 6 mA, slowly declining thereafter (see the TechZone article “Identifying the Causes of LED Efficiency Droop”).

While the efficacy is maximized, unfortunately LEDs just do not produce enough light at low forward currents. Figure 2 shows how the luminosity of Cree’s XLamp MK-R increases with forward current. It can be seen that the relationship between the variables is nearly linear. 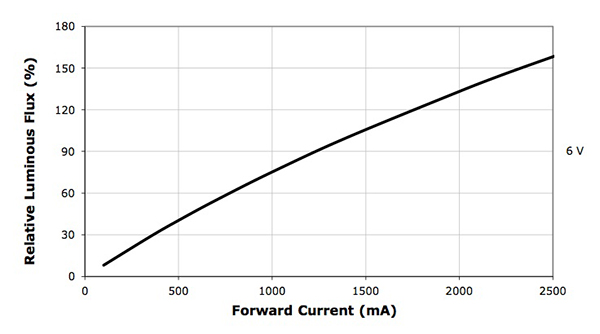 As the LED industry has matured, sold-state lighting has become far more efficient and robust. Test data, such as that derived from LM-79, LM-80, and TM-21 (see the TechZone article “The Latest Testing Requirements for Solid-State Lighting”), is beginning to show that perhaps current guidelines––even though operating currents have climbed––are still too conservative.

The tests operate under the premise that LED failure is the point at which light output has declined to 70 percent of initial luminous flux (lm), abbreviated as L70. Testing LEDs to the actual point of failure is challenging because modern devices can last in excess of 50,000 hours (nearly six years) so data from much shorter test periods is typically extrapolated to estimate longevity.

The biggest killer of LEDs is junction temperature. The higher the temperature, the sooner the device fails. The mechanisms of failure are complex, but in essence come down to higher temperatures encouraging the development of threading dislocations - minute discontinuities in the otherwise regular LED crystal structure. Threading dislocations are vertical micro-cracks caused by strain generated by the mismatch in the LED’s indium gallium nitride (InGaN) and silicon carbide (SiC) or sapphire substrates. Threading dislocations cause the LED’s output to decrease because they form sites for nonradiative recombinations — areas of the LED where electrons and holes recombine but don’t product a photon. Worse yet, the energy emitted in these nonradiative recombinations is transferred by the emission of a “phonon,” a vibration introduced to the crystal lattice that generates even more unwanted heat (see the TechZone article “Understanding the Cause of Fading in High-Brightness LEDs”).

However, as a large bank of test data has built up over a number of years it is increasingly apparent that modern devices are becoming more robust and hence capable of lasting longer. Alternatively, this increased resilience allows the devices to be driven hard, yet still exhibit longevity comparable with older products subject to lower currents. Cree, for example, has shown that LEDs running at a forward current of 1 A and a junction temperature of 85°C exhibit an L70 measure of 60,500 hours, comparable to yesterday’s products tested at 350 mA and correspondingly lower temperatures. Even devices operating at a junction temperature of 105°C have been shown to have an L70 measure in excess of 36,000 hours.

Improved materials and manufacturing techniques are, to a major extent, responsible for better robustness by arresting the rate of formation of threading dislocations in LEDs both during assembly and due to high temperatures in operation. For example, Seoul Semiconductor is commercializing a bulk form of InGaN crystal that does away with the SiC or sapphire substrate and hence the active material/substrate crystal mismatch and associated threading dislocations (see the TechZone article “Material and Manufacturing Improvements Enhance LED Efficiency”).

This does not mean than LEDs can be driven to the limit in the expectation that they will rarely die — because other failure mechanisms, such as solder joint breakdown, come into play at extreme junction temperatures. But it does allow engineers to employ higher drive currents than previously, increasing their product’s luminosity, safe in the knowledge (reinforced by the chip manufacturer’s test data) that the resultant higher junction temperatures are well within the chip’s operating limits and will not unacceptably shorten the LED’s life.

Another reason why it is becoming more practical to increase forward current is because of rapidly increasing LED efficacy. In the technology’s foundation years, manufacturers struggled to produce LEDs with efficacies over 20 lm/W. Although this was superior to incandescent bulbs (10 to 18 lm/W), it fell short of other lighting technologies such as compact fluorescent lights (CFL: 35 to 60 lm/W) and fluorescent tubes (80 to 100 lm/W).² Such poor performance meant that operation near to the point of maximum efficacy (but with acceptable luminosity) was more important to compete with other lighting technologies than pushing up the drive current to boost luminosity. 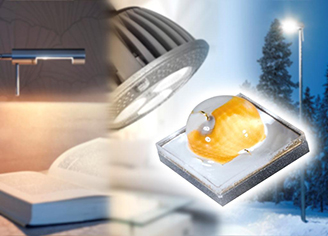 The high efficacy of modern products allows engineers the flexibility to drive LEDs harder to boost luminosity while still operating the devices at a point where they are still far more efficient than competing technologies (see the TechZone article “LED Efficacy Improvement Shows No Signs of Slowing”).

Designers typically use several LEDs to generate sufficient light to match alternative light sources. For example, a single 100 W, 120 V incandescent bulb generates 1,700 lumens (at an efficacy of around 17 lm/W). In comparison, a popular LED such as Seoul Semiconductor’s Acrich MJT 2525 generates 90 lm (40 mA, 23 V, 98 lm/W). A lighting designer would need nearly 20 of these devices to provide approximately the same output as the bulb.

Grouping LEDs into arrays to boost output introduces challenges from space, illumination, optical, and manufacturing viewpoints. For example, optimizing the quality of the light from an LED array is difficult. While LED manufacturers sort their chips into “bins” of approximately the same color-correlated temperature (CCT), closely matching individual devices so that the consumer notices no difference between them when used in a single fixture is expensive and time consuming.

A second problem with a large array of LEDs is that the devices “age” at different rates. Many of the LEDs in a fixture could have plenty of life left while the others have dimmed, resulting in the consumer junking the unit. Finally, assembling an array of many LEDs is difficult and labor intensive, further pushing up costs (see the TechZone article “LED Packaging and Efficacy Advances Boost Lumen Density”).

By operating the LEDs at higher currents, fewer devices can be used for the same luminosity, cutting system costs, simplifying design, and easing optical and manufacturing challenges.

However, the designer must ensure that the associated temperature rise is catered for in the system design.

The key consideration when determining how high to let LED junction temperature rise in the quest for greater luminosity is whether the light fixture itself can handle all the extra heat. Although the LED might be able to cope, that’s of little use if other components in the fixture are damaged by excessive heat.

For example, it’s hard for a small-form bulb, such as an MR16, to dissipate much more than 15 W of thermal load — which limits drive currents for typical LEDs used in the product to the 350 mA region (Figure 4, see the TechZone article “LEDs Address Drawbacks of Halogen MR16 Fixtures”). But larger fixtures, with space for a bigger heat sink, would be able to dissipate the greater power generated by higher drive currents. 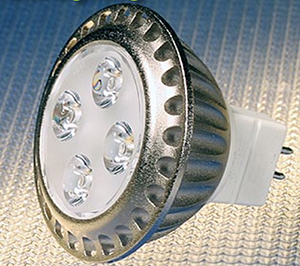 Figure 4: The MR16 form-factor limits the amount of power it can dissipate. (Courtesy of Lumex)

Another less obvious but equally important consideration is the effect of temperature on chromaticity. For example, Figure 5 shows how the color points for a Cree XP-E LED shifts over a temperature range of 25° to 85°C (LEDs from every manufacturer exhibit some degree of color shift with a rise in junction temperature). The LED’s color point shifts about 0.002 in the CIE 1976 L, u’, v’ color space. This shift is confined to a single bin defined by the red quadrilateral; the bins are sized such that devices grouped therein appear to be the same color to the human eye. So, for this example, the chromaticity shift would be imperceptible to the consumer. 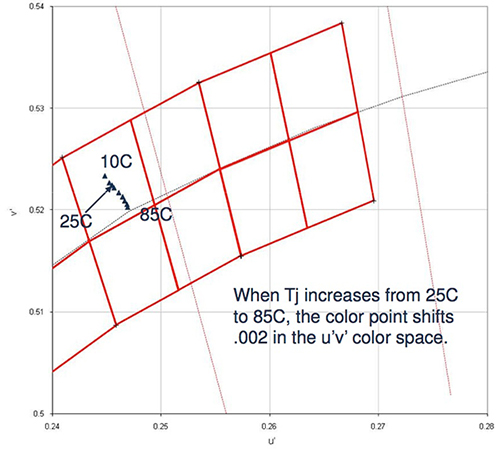 The smallest color difference that the human eye is able to sense is approximately 0.003 in the yellow and orange regions of the color space and 0.004 in the red region. To cause that degree of shift requires an LED to become very hot. Nonetheless, for a lighting design using high forward currents to increase luminosity, the engineer is advised to carefully check the data sheet for color shift against temperature when deciding how hard to drive his or her LEDs (see the TechZone article “Thermal Effects on White LED Chromaticity.”)

A final consideration is any appropriate regulations. ENERGY STAR, for example, requires that LEDs exhibit a specified efficacy. Driving the LEDs harder could result in the efficacy dropping below that required for compliance.

Making the most of luminosity

Conservatism in the LED lighting sector has resulted in relatively low driving currents for solid-state lighting. While this has aided LED efficacy, the upshot is that the devices have exhibited only a fraction of their luminous capacity.

However, designers should be aware that boosting drive currents increases operating temperatures, which can lead to damage to lighting fixture components if they have not been upgraded to cope as well as imparting chromaticity changes. Any new design should take into account the temperature effect of raising drive current.