Thermoelectric energy harvesting offers an attractive solution for many low-power applications. Using energy extracted from thermal gradients, low-power circuits can operate for years without the need for battery replacement. Designers can build highly efficient power sources able to maximize energy extraction from thermal sources by taking advantage of available transducers and converter ICs from CUI, Laird, Linear Technology, and Texas Instruments, among others.

Thermoelectric energy harvesting exploits the Seebeck effect, where current flows in a loop formed by two different conductors when the two junctions of the conductors are held at different temperatures. Commercial thermoelectric generators (TEGs) maximize this effect by providing a grid of n- and p-doped semiconductor materials, physically arranged in parallel to achieve maximum exposure to thermal sources. Although the voltage drop across each junction is small individually, the junctions in the grid are electrically connected in series to achieve maximum output voltage. As a result, TEGs can generate a useable voltage output from even modest temperature differentials across the two sides of the TEG. 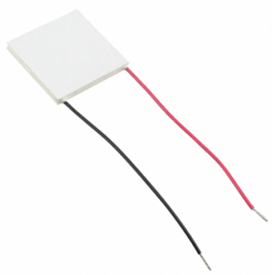 Figure 1: Thermoelectric generators such as the CUI CP85 series package a grid of n- and p-doped junctions, connected serially to provide maximum voltage output from thermal differentials applied to opposite sides of the package. (Courtesy of CUI, Inc.)

The Laird Technologies PolarTEC series includes devices with specified Vmax ranging from 14.4 V to 35.9 V. For typical TEGs, however, ΔTmax ranges from 68°C to well over 70°C - temperature differentials that are unlikely to be found in most applications of thermal energy harvesting outside of automotive or industrial environments. For a typical application, engineers attach one side of the TEG to the thermal source, and use a heatsink on the other side to create the temperature differential. In many energy harvesting target applications, the available temperature differential might be only a few degrees, so voltage output from the TEG could be only a few volts at best. Although high efficiency in energy extraction is particularly important in these low ΔT situations, maximum energy extraction remains paramount in any thermal-energy-harvesting design. Consequently, effective thermal energy scavenging depends on the use of a highly efficient power conversion stage.

A number of key requirements drive the design of a suitable power conversion stage for thermal energy harvesting. Among the most critical requirements, charge and power management capabilities are generally needed to support thin-film batteries or supercapacitors. These energy storage devices are typically required to accumulate the low, but constant, trickle of energy available from ambient sources, and provide a source of peak power needed for periodic, high-load operations such as wireless transmission.

When charge management is a primary requirement, devices such as the Linear Technology LTC4071 can deliver needed functionality. Designed to charge Li-ion batteries from very-low-current and intermittent sources, the LTC4071 operates with a typical operating current of 550 nA, making it well suited to thermal-energy-harvesting applications. Furthermore, the LTC4071 requires just one external resistor to provide a complete charger solution suitable for thin-film storage devices.

Other ultra-low-voltage input step-up converter and power manager devices from Linear Technology include its LTC3108 and LTC3109, designed specifically for energy harvesting applications. The LTC3108 and LTC3109 combine the ability to operate with very low-input-voltage sources and the functionality required to support diverse application power requirements. As a result, engineers can build sophisticated thermal energy power sources with a minimal complement of external components. Both devices integrate sophisticated charge control and power management circuitry to provide multiple voltage output sources. VSTORE output can be used to charge a supercapacitor or thin-film battery; VOUT2 provides switched output for switched loads; VLDO provides output from the integrated 2.2 V LDO for devices such as MCUs; and VOUT provides the primary output from the on-chip voltage converter.

On the input side, the devices offer designers different options. The LTC3108 uses an external step-up transformer and associated capacitors to provide a charge pump, able to boost input voltages as low as 20 mV to levels needed to supply application circuitry and to charge storage devices.

The LTC3109 offers two parallel input channels using two small external step-up transformers and accompanying capacitors to provide boost conversion functionality. At the heart of this boost circuit, MOSFET switches combine with the external transformers to provide a resonant step-up oscillator able to work with input voltages as low as 30 mV. Because it uses a pair of step-up transformers, the input voltage for the LTC3109 can be of either polarity, providing an important benefit for TEG-based power sources where temperature differentials across the TEG could be either polarity at different times (Figure 2). 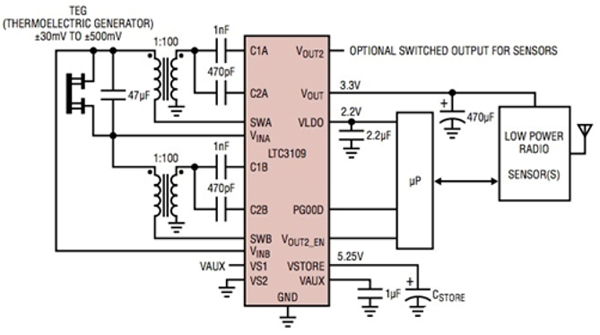 Figure 2: For highly variable thermal environments where temperature differentials could switch polarities, engineers can use both input channels of the LTC3109 to extract energy regardless of polarity. (Courtesy of Linear Technology.)

Along with the ability to operate at low input voltages, a power conversion stage suitable for TEG sources needs the ability to maintain the TEG at its maximum power point (MPP) - the point of maximum energy output (Figure 3). For the engineer, determining MPP for a TEG becomes evident after considering its equivalent circuit. 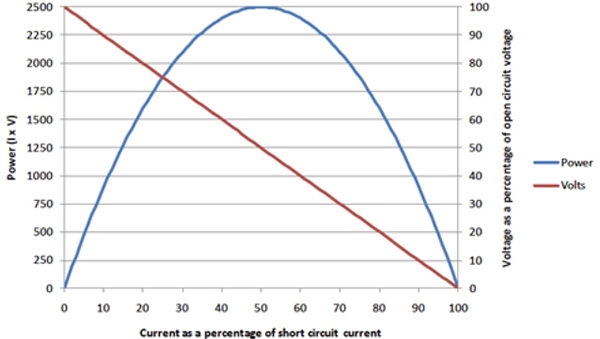 Figure 3: Energy transducers such as TEGs that have constant output impedance show a characteristic peak in the power curve – the maximum power point (MPP) – where the load impedance matches the transducer source impedance. (Courtesy of Cymbet.)

A TEG can be modeled as a voltage source Voc with internal resistance Rs = Voc/Isc, where Isc is the short-circuit current and Voc is the open-circuit voltage proportional to the temperature difference and Seebeck coefficient. In an ideal circuit, the TEG generates maximum power when the load resistance matches Rs, or Voc/2.

The Linear Technology LTC3105 features an integrated MPP controller, able to ensure that the input power source voltage remains above a user-programmable threshold. Able to operate from input voltages as low as 225mV (250mV startup), the LTC3105 provides a boost converter output, as well as LDO output for powering MCUs and external sensors.

The Texas Instruments bq25504 features a boost converter that operates with startup input voltages of 330 mV and continue operation with input voltages as low as 80 mV. The device features an MPPT capability that engineers can program using an external resistor network.