How clothing could exploit energy harvesting techniques to power electronic devices directly, charge up batteries, and incorporate batteries in their fibers.


‘Power dressing’ takes on a whole new meaning following recent research into incorporating energy harvesting electronics technology into fabrics. Solar energy technology advances, for example, will soon yield clothing and upholstery that can be used to charge batteries and power devices. A material woven with polymeric piezoelectric fibers that can be worn comfortably will harvest energy from simple movements. Piezoelectric nanogenerators based on GaN nanowires will generate power in much the same way.

Storing the energy generated and converting it to a usable form is an important consideration. A network of graphene and carbon nanotubes is under development to produce a fiber-like energy storage device that can be incorporated into a fabric to operate like a supercapacitor. Elsewhere, research is yielding a compact, stretchable wire-shaped supercapacitor based on continuous carbon nanotube fibers. An alternative approach has created a flexible thin-film delivering the best qualities of a lithium battery (without the lithium) and a high-powered supercapacitor.

This article will summarize this research to show how our clothing could exploit energy harvesting techniques to power electronic devices directly, charge up batteries, and even incorporate batteries in their very fibers.

For comparison purposes, the article will consider the current state-of-the-art in supercapacitors, in terms of physical size/bulk, performance and lifetime, for wearable applications, illustrated by examples from the Elna America and Seiko Instruments’ ranges. Charging and managing such supercapacitors will be covered, with reference to devices including the BQ25504 boost converter and battery management IC, and its associated development kit, both from Texas Instruments.

A photovoltaic material, light and flexible enough to be worn as clothing, is expected to be available in the very near future, according to its developers at the Dephotex project.1 This EU Framework research has developed fibers with conductive properties that can be woven to form a substrate for flexible photovoltaic cells. Demonstrators have been presented at various conventions in recent years, showing how both small scale devices can be powered and small batteries can be charged, while larger scale installations such as solar tents, sun shades and curtains and upholstery can be used to power lights and even charge car batteries.

Meanwhile, researchers in the UK have developed a knitted flexible fabric that generates energy from human movement or the ambient environment using piezoelectric techniques. The University of Bolton’s Institute of Materials Research and Innovation,2 has devised a 3D textile structure based on piezoelectric PVDF fibers, which is flexible, breathable and tough, and importantly, is available for commercial exploitation via partner company, FibrLec. See Figure 1. 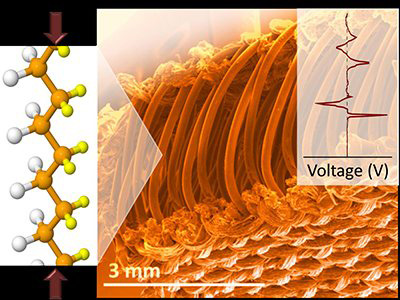 Two separate conducting, silver coated polyamide textile faces (the electrodes) are joined together by the PVDF spacer yarn. Compression of the fabric causes the spacer yarn to generate a charge that is collected by the two metallic faces. Currently, 1 to 5 µW/cm² of energy can be generated, sufficient to power a small sensor.

Applications are envisaged in clothing and shoe insoles, for example, to power small portable devices, and also in carpets and other floor surfaces or seating materials to power lighting and multiple data transfer ports in airports or shopping centers.

Energy storage continues to be a hot topic among researchers seeking an alternative to conventional batteries. A supercapacitor-like energy storage device, in the form of a fiber that can be woven into clothing, has been developed by scientists from Case Western Reserve University3 in the US, Nanyang Technological University in Singapore and Tsinghua University in China. This tightly packed interconnected network of graphene and carbon nanotubes is claimed to have a volumetric energy density of 6.3 µWh/mm³, equivalent to a 4 V, 500 µAh thin-film lithium battery. However, unlike a battery, it charges and releases energy much faster, more like a supercapacitor.

It can be woven into clothing to power medical devices for people at home, or powering communications devices for soldiers in the field. The fiber could potentially be used as power source or ‘energy-carrying wire’ in medical implants. The fiber is tough, withstanding constant mechanical stress, and has been tested for 10,000 charge/discharge cycles.

With the same goal in sight - the best features of a high-energy battery and a high-powered supercapacitor - researchers at Rice University4 have developed a thin-film, flexible battery. Based on nanoporous nickel fluoride electrodes layered around a solid electrolyte, a 25 mm² patch of this thin-film electrochemical capacitor has been tested over 10,000 charge/discharge cycles and 1000 bending cycles. The researchers were looking for a material with the flexibility of graphene, carbon nanotubes and conducting polymers, but with the much higher electrical storage capacity typically found in inorganic and metal compounds.

Figure 2: Structure of the thin-film supercapacitor developed by Rice University, based on a nanoporous layer.

From researchers at the University of Delaware,5 stretchable, wire-shaped supercapacitors based on continuous carbon nanotube fibers are likely to find application in wearable energy devices. The team fabricated the device using a Spandex fiber as a substrate, with pre-strained and buckled carbon nanotubes as the active electrodes and a polyvinyl alcohol sulfuric acid gel as the solid electrolyte. Testing over 10,000 charge/discharge cycles has demonstrated superior electrical conductivity and electrochemical stability.

Meanwhile, continuing research into improving supercapacitors, in terms of size, flexibility and energy storage capability, has yielded a number of micro-supercapacitor developments at the Leibniz Institute for Solid State and Materials Research in Dresden (IFW-Dresden).6 In one project, manganese dioxide is used as an alternative electrode material. Bendy films are produced by vaporizing the manganese dioxide using an electron beam and allowing the gaseous atoms to precipitate. A half centimeter square can store more energy and provide more power per unit volume than state-of-the-art supercapacitors, the researchers claim.

While it is important to monitor how the technology is developing, today’s state-of-the-art supercapacitors are already being used in wearable applications. Their biggest disadvantage, of course, is their lack of flexibility. Small size, therefore, is essential. One of the smallest, longest lasting, highest capacitance devices available is the DSK-3R3H204T614-H2L from Elna America. This coin cell format supercap measures 6.8 mm in diameter with a height of 1.8 mm. Rated at 3.3 V it features a capacitance of 200 mF and ESR (equivalent series resistance) of 200 ohm. Lifetime is quoted as 1000 hours at 60oC.

It is the extended lifetime combined with their ability to store and discharge relatively large amounts of energy quickly that makes supercapacitors effective for energy harvesting applications. They can be used in conjunction with batteries, but can often replace them, depending on the functionality required. A key advantage is that they do not need to be charged at a constant voltage, but will charge efficiently by drawing the maximum current the source can supply.

A little more than half the size, at 3.8 mm diameter, the XH311HG-IV07E from Seiko Instruments is rated at 3.3 V with a capacitance of 20 mF and is reliable to at least 10,000 charge/discharge cycles. It is widely used as a back-up power supply for small portable devices.

In wearable applications, supercapacitors are small and compact enough to be integrated with other circuitry or wired remotely and sewn into clothing, under a collar or lapel, or in a pocket, for example, or worn on the wrist or a chest strap.

Whether in coin or chip format, supercapacitors need to be integrated with the energy harvesting circuitry they are supporting. Whether used in conjunction with, or as a replacement for lithium batteries, for example, they need some form of power management for efficient operation.

Designed specifically for ultra-low power and energy harvesting applications, is the bq25504 boost/charger IC from Texas Instruments. It can acquire and manage power from microwatts to milliwatts from a variety of DC sources, including solar and piezo/vibration devices. It can start from an input voltage as low as 330 mV, and once operating can harvest energy trickling in at 80 mV. When a supercapacitor is integrated into the system, the bq25504 monitors for over and under voltage conditions and signals to the controller when the stored energy has dropped below a pre-set level.

An evaluation module, the bq25504EVM-674 is available for checking out the features of the boost/charger IC. Equipped to deliver a 3.1 VDC maximum voltage for charging the supercapacitor, under voltage is programmed to 2.2 VDC.

Within just a few years, fabrics for clothing and upholstery will incorporate not only energy harvesting technology within their very fibers, using photovoltaic and piezoelectric techniques, but also energy storage elements combining the best features of both supercapacitors and batteries. Flexibility and durability are the sought after characteristics, yet they need to meet the performance levels of conventional energy harvesting and storage devices. It may not be long before the control electronics become the limiting factor in wearable applications, rather than the energy storage components, as is the case today.