Providing documentation that shows compliance to Dodd-Frank conflict minerals regulations will be costly and time-consuming. 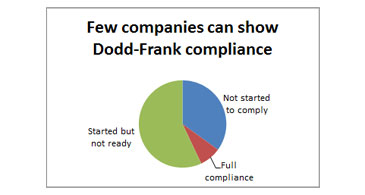 About 7.5% of electronics companies surveyed said they were ready to show compliance to the Dodd Frank conflict minerals regulations.Major tantalum capacitor manufacturers should have little trouble meeting next year’s reporting deadline for Dodd-Frank rules concerning conflict minerals, although a recent survey found that more than a third of electronics companies are not yet prepared to demonstrate compliance with the regulations.

Under provisions of Dodd-Frank, companies must disclose whether they use conflict minerals in their products. Conflict minerals are mined in regions of armed conflicts and human rights abuses including the Democratic Republic of Congo in Africa. The minerals include tantalum, tungsten and gold, which are used in many electronic components.

Under Dodd-Frank, companies must show documentation for what they've done to ensure that their use of raw materials does not contribute to human atrocities in DRC and other nearby countries in central Africa. The first disclosure deadline is May 31, 2014.

A recent survey by researcher IHS found that more than 35% of companies said they have not yet made plans about how they will deal with the conflict minerals regulations, while 7.5% said they were well prepared to comply with the reporting.

IHS says that documenting compliance is time-consuming and costly, but should be less complicated than originally projected.

Some major tantalum capacitor manufacturers agree. Dave Valletta, executive vice president for worldwide sales at Vishay Intertechnology, headquartered in Malvern, Pa., says that showing compliance to the regulations will not be difficult to do.

“It's not a big problem. Vishay is in compliance and I think most of our major competitors are as well," he says. 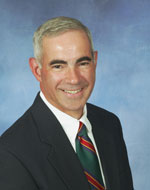 “Vishay is in compliance [to conflict minerals regulations] and I think most of our major competitors are as well," said Dave Valletta, executive vice president worldwide sales at Vishay Intertechnology.The Dodd-Frank regulations were "something that came up and everyone had to adapt to them and now it seems to be going along okay. There may be some smaller suppliers out there that aren't complying," says Valletta.

One reason compliance won't be complicated is because smelters have been audited to determine if they use conflict minerals, according to major capacitor manufacturers.

Gordon Hoey, global marketing manager, tantalum for capacitor manufacturer AVX, says about 85% of the tantalum ore is processed into powder used in capacitors at one of four smelters.

“All four have passed the Electronic Industry Citizen Coalition audits," says Hoey. The EICC is a coalition of leading electronics companies that work to improve social, ethical, and environmental responsibility in the supply chain.

“That means those processors are able to identify where they are getting material and they are able to show that none of the material that they are using is conflict material,” says Hoey.

Hoey notes that AVX has been auditing its panel of suppliers for years and has worked closely with the EICC.

“We started to audit our processors in 2004 through 2008 to make sure we're not getting any material from central Africa," says Hoey.

Capacitor manufacturers say only a small percentage of tantalum used in capacitors is sourced from central Africa, although the percentage was close to 10% several years ago when there was a shortage of tantalum. Tantalum is also mined in Brazil, Eastern Europe, China and Australia.

“I have seen estimates of the material from central Africa being 2% to 3%," explains Hoey. “No one has perfect numbers on this, but even when it was at its height when conflict minerals were coming through the back doors it was between 6% and 9%" of tantalum used in components, Hoey says.

He notes that central Africa is not a “cheap source of material. The material that we purchased out of central Africa we buy at the global market spot price. We are not driving down the cost. We don't have a cost-benefit in doing this. By the time you pay the market price plus additional efforts to make sure the material is not conflict, it is not a cheap solution,” he says.