Performance of today’s LEDs and the hurdles that will need to be cleared before the U.S. Department of Energy’s target LED lighting efficacies are satisfied.


The U.S. Department of Energy (DOE) is in the vanguard of authorities that are encouraging the development of solid-state lighting (SSL). While manufacturers have made tremendous advances in the efficacies of their products, DOE is keen to push the LED makers even harder to realize the full potential of LED technology.

White-light phosphor-conversion LEDs –– which use a royal-blue LED combined with yttrium-aluminum garnet (YAG) phosphor –– and color-mixed LEDs –– separate red, green, and blue (RGB) devices whose light is mixed –– have a theoretical maximum efficacy of 199 and 266 lm/W, respectively (once inherent packaging inefficiencies are taken into account).

DOE has adopted these numbers as its targets and is encouraging manufacturers to redouble their efforts, but major challenges loom. This article summarizes the performance of today’s LEDs and looks ahead at the hurdles that will need to be cleared before DOE’s ambitions are satisfied.

The U.S. Energy Policy Act of 2005 directs the DOE to “support research, development, demonstration, and commercial application activities related to advanced solid-state lighting technologies based on white light emitting diodes.” In support of that objective, DOE periodically releases its Multi-Year Program Plan.¹ Last published in April 2012, the plan is a comprehensive document that focuses on core technology research and product development, which is an important part of the department’s efforts to guide SSL technology from laboratory to marketplace.

According to the scientific literature, the theoretical maximum efficacy of an LED based on contemporary materials –– given perfect conversion of electricity to light –– is somewhere between 350 and 450 lm/W. From this starting point, DOE has calculated the practical efficacy limit to be 266 lm/W for RGB devices and 199 lm/W for phosphor-conversion LEDs.

The department has assumed that the physical limit for RGB LEDs will be tempered by package inefficiencies resulting in an actual conversion efficiency of 67 percent. Similarly, the potential for phosphor-conversion LEDs is tempered primarily by the losses incurred in the Stokes’ conversion of blue photons from the LED into the yellow and red photons that contribute to the white-light spectrum. The phosphor-conversion losses are responsible for the near 33 percent difference between the maximum potential of the competing technologies.

As a result of further optical losses in lighting fixtures, an LED producing 266 lm/W would translate to a luminaire that produces 200 lm/W. Upon reaching such levels, SSL would far surpass the efficacy of fluorescent (100 lm/W), compact fluorescent (75 lm/W), high-intensity discharge (HID, 115 lm/W), and incandescent sources (15 lm/W), all of which are generally considered mature technologies with few opportunities for further performance enhancement.

Manufacturers rise to the challenge

There are many factors that contribute to inefficiencies in LEDs. However, in basic terms these can be grouped into three areas: production of the photons in the first instance (which considers the efficacy of the blue LED and phosphor in the case of phosphor-conversion LEDs and the efficacies of the individual colored LEDs in the case of RGB LEDs), extracting the photons from the LED, and extracting those photons from the LED package (which takes into account photons that have escaped from the LED itself only to be absorbed somewhere else in the LED package). A final factor that has a major impact is a phenomenon known as “efficiency droop” (see the TechZone article “Identifying the Causes of LED Efficiency Droop”) which dictates that while higher currents make an LED burn brighter its efficacy tails off. This phenomenon affects some colors of LEDs more than others.

Hundreds of millions of research dollars and some very clever scientists and engineers at companies such as Cree, OSRAM, Philips Lumileds, and Seoul Semiconductor have produced remarkable LED efficacy gains over the last two decades. (See the TechZone article “Material and Manufacturing Improvements Enhance LED Efficiency”.) Figure 1 illustrates the improvements in efficacies for both phosphor-conversion and RGB LEDs since 2005. (Note that there is a difference between “cool” and “warm” because warm devices require more red content to their output spectrum and the production of red photons –– from customized phosphor or red LED –– is inherently less efficient than production of photons towards the blue [cooler] end of the spectrum.) 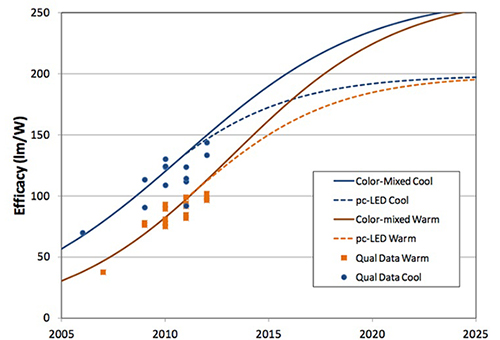 Today engineers can buy relatively inexpensive devices with efficacy of well over 100 lm/W. For example, checking products from various manufacturers in the popular “1W” packages (driven at a forward voltage of 3 V, forward current 350 mA) shows that Cree’s XLamp XB-D produces 116 lm/W with OSRAM’s OSLON SSL 150 White producing 136 lm/W. Philips Lumileds sells the LUXEON REBEL White which produces 118 lm/W and Seoul Semiconductor provides the Acrich white LED which puts out 103 lm/W. (Note that the devices listed here are not necessarily direct equivalents and are examples only. All manufacturers listed make a wide range of LEDs offering varying efficacies and engineers should check the data sheets for full specifications.)

It turns out that the limiting factor for phosphor-conversion LEDs is the phosphor itself. Intensive development has seen the quantum efficiency (a measure of the total output photon energy from the phosphor compared to the input photon energy from the LED) of YAG phosphor under blue LED excitation rise to around a healthy 80 percent. Despite its good performance, YAG phosphor is not perfect and effects such as “temperature quenching” ultimately impinge on efficacy.

Phosphor manufacturers are stepping up to the challenge to produce new materials that promise to form commercial phosphors with higher conversion efficiency while supporting a wide color-correlated temperature (CCT) range and good color-rendering index (CRI). Among the most promising candidates are nitride and oxynitride materials that replace the electroluminescent properties of cerium used in current commercial grades with another rare element, the metal Europium (Eu). However, even with these new materials, phosphor conversion will ultimately hit a natural barrier putting an upper limit on the overall device’s efficacy (see the TechZone article “Phosphor Development Addresses Lower Efficacy of Warm-White LEDs”).

By removing phosphor from the equation, RGB LEDs eliminate that barrier and are then only constrained by the quantum mechanical laws of electroluminescence which dictates the 350 and 450 lm/W upper limit (Figure 2). 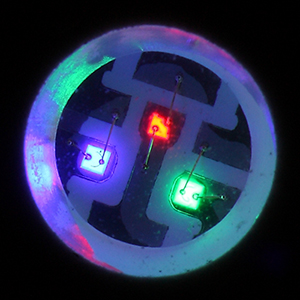 However, pushing RGB LEDs to that point will not be easy. The key obstacle today is the efficacy of green LEDs. While blue and red devices have steadily improved, green LEDs have stalled. A green LED’s external quantum efficiency (EQE) is about 25 percent, compared with blue and red devices that boast peak power-conversion efficiencies beyond 81 percent and 70 percent, respectively.

The problem boils down to the fact that altering the composition of the semiconductor so that it emits in the green part of the spectrum leads to poor carrier confinement, due to the relatively low band gap of the material system. In other words, electrons leak away rather than radiatively recombining with holes to release a photon. Worse yet, green LEDs suffer from greater efficiency droop than other colors.

An interim measure, exploited by Philips Lumileds with its lime-green LED from the Rebel ES family, is to combine a royal-blue LED with a lime phosphor. According to the datasheet, this blue LED/green phosphor combination is capable of an efficacy of up to 190 lm/W (2.75 V, 350 mA).

Since phosphor-conversion LEDs are simpler and cheaper to manufacture, they are much more widely available than RGB LEDs. However, the latter are nearing commercialization and besides promising greater efficacy, they also boast advantages like color-tunability – allowing the consumer to set the “temperature” of the white light to suit their mood (see the TechZone article “Lime-Green LEDs Encourage Color-Tunable Lighting”).

The future holds much promise for LEDs and with a competitive environment and support from organizations such as DOE; manufacturers will overcome the tough technical challenges currently slowing progress. With an eventual efficacy far superior to other light sources and falling prices, SSL looks set to become the primary illumination technology for domestic, commercial, and industrial applications by 2020.