As the LED lighting industry becomes a more mainstream market, increased thermal challenges have become a huge topic in the industry.


As the LED lighting industry becomes a more mainstream market, increased thermal challenges have become a huge topic in the industry in terms of how to effectively cool fixtures that run the gamut from LED powered streetlights to PAR30-type consumer lighting.

In particular, as LED lighting continues to migrate to higher wattage and higher lumens, passive cooling solutions are no longer sufficient to conduct and dissipate heat out of the LED and into the surroundings in a fast and efficient manner. This means thermal management manufacturers need to develop smaller and less costly designs, such as active cooling modules to help cool higher power LED lights and bulbs. Many of the new cooling designs target LED downlights and spotlights, including A19 and MR16 bulbs. As examples, we will look at Sunon's and Nuventix's families of LED active cooling modules.

Since LED lighting is not a market that manufacturers can effectively pursue on cost, they have to sell on performance, explained John Fulmer, Suwon’s regional sales manager for the Southern half of the U.S. and Latin America. This translates into using factors such as lumens, low power consumption, and long service life to substantiate the return on investment (ROI) a customer will receive against a relatively high upfront cost.

Fulmer said that for large installations, it becomes even more important to sell performance, long life, and overall value. "As they get into these different applications, the scale of the thermal challenges becomes greater. It's no longer just a small light bulb; it's a very large heat source."

Traditionally, if possible, electronics designers want to cool LED systems through a passive solution. And, in fact, most LED lights are cooled through some form of heatsink or other passive cooling solution that does not require a fan, he said, adding that this is one of the reasons why Sunon and other thermal providers have been playing in the passives cooling market, where they provide a variety of heatsinks.

"But what we're finding is in order to realize the advantages of the product technology, you really need active cooling in some instances," said Fulmer. Even a perfect LED light that in theory might last many years could suddenly turn into a five-month light bulb because the allowable thermal performance specification has been exceeded, he noted.

Customers are now telling thermal management suppliers that they cannot cool some of their lighting fixtures well enough with just a heatsink, and in some cases, it is not possible at all because the heatsink would be too large and too costly, Fulmer said.

Active coolers or cooling modules use both a heatsink and a cooling fan. That is because a heatsink is a very good way to cool devices but since they collect dust, it often makes them less effective. However, with an active cooler that features a patented fan positive/negative turn design, not only is the fan cooling the heatsink, it is also cleaning the sink, according to Fulmer.

In addition, an active cooler will typically be available in a smaller size and at a lower cost. By selecting an active cooler, the size of the heatsink is reduced, which saves more money than the cost of adding a fan. The combination of the two delivers good performance at a low cost, and brings more benefits to the table, according to Fulmer.

Fulmer cited an example of a heatsink solution for a Philips product, which measures 175 mm in diameter, 30 mm thick, and weighs 570 grams. For the same LED source, Sunon offers an active cooler with a much smaller sink that measures 85 mm in diameter and 35 mm thick in an overall much smaller package. It also weighs significantly less than the heatsink, cutting the overall weight of the solution.

This can reduce the upfront costs of the lighting fixture. "When performance is compared between the two, the active cooler performs better as far as cooling so it's more likely to get a higher level of light performance," said Fulmer. "It's also a lower cost solution because so much of the cost is embedded in the large sink."

Sunon offers several MR16 and A19 active coolers with a combination heatsink and fan, including the LA001, LA002, LA003, LA004, TA001, TA002, TA003, and TA004, which are available in a variety of sizes and shapes to cover all spotlight applications (Figure 1). The smallest cooler measures 50 mm in diameter, and the largest one measures 85 mm in diameter. Heatsinks and fans also can be purchased individually. 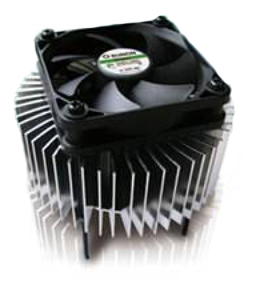 Figure 1: Sunon offers a variety of LA00x and TA00x MR16 and A19 active cooling modules, which combine a heatsink and cooling fan to deliver less costly and small solutions for a mix of LED spotlight manufacturers (Courtesy of Sunon).

These active coolers are commonly used in consumer-type LED products. Fulmer said a variety of fan and heatsink sizes are available to accommodate the wide range of LED lighting provider products.

Nuventix also touts cost savings with its patented SynJet technology based coolers used for industrial applications (see the TechZone article “Industrial Cooling with Nuventix SynJet Technology and Complementary LED Heatsinks”). The company offers several coolers including the ZFlow 90 and SynJet Spotlight Cooler 70 W for downlights and low-bay lighting for industrial applications. Targeting small, lightweight, and cost effective designs, this spotlight cooler uses forced cooling to dissipate 70 W, while enabling up to 10,000 lumens of light in a 118 to 134 mm form factor.

Nuventix also recently introduced its LED Cooler R150-170, also built on its SynJet technology (Figure 2). The high bay LED cooler is 33 percent smaller and 60 percent lighter than passive cooling equivalents used in industrial applications. The modular solution can be used as a standalone heatsink or with up to three SynJets. 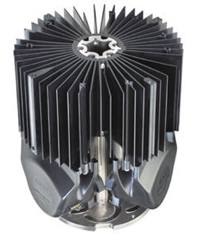 Thanks to the heat pipes and SynJet air transfer, the R150-170 LED cooler can cool up to 20,000 lumens in a round design. The company said that lighting manufacturers could use smaller, less-expensive LED arrays and still achieve high color quality and lumen output. This is due to the advanced thermal spreading and heat transfer capabilities of the R150-170.