The sprinkling of capacitors in modern switching DC/DC converter designs can lead to high in-rush currents as the module starts up.


The sprinkling of capacitors in modern switching DC/DC converter designs can lead to high in-rush currents as the module starts up. Apart from the risk of component damage and system malfunction, such in-rush current can also cause troublesome problems for engineers trying to maximize battery life in portable products.

This article describes why in-rush current occurs, how it can compromise battery life, and the steps that manufacturers of modern power modules have taken to limit the problem.

What is in-rush current?

Switching DC/DC converters typically feature several capacitors. For example, one device forms part of the electromagnetic interference (EMI) input filter designed to limit interference generated by current flow in the input loop (Figure 1) while another sits on the output side to limit voltage ripple.

When the converter is first switched on, these uncharged capacitors act as virtual short circuits, allowing the current to rapidly escalate. The current spike lasts only as long as it takes the various capacitors to charge, but it can reach a peak value well in excess of what the converter would otherwise experience, even under full load. The only characteristics that limit the magnitude of the spike are the line impedance and the capacitors’ equivalent series resistance (ESR).

An uncontrolled in-rush spike can cause havoc. In the first instance, there’s a chance that components can be damaged or sensitive silicon disturbed such that system errors occur. But that’s not all; in portable devices with modest power supplies, all the good work that the engineer has done to maximize battery life can be undone by wayward current behavior.¹

A battery’s behavior changes during its discharge cycle. As the cell discharges, its internal resistance rises and the voltage the battery can supply to the load falls. Note that the relationship between capacity and supply voltage isn’t linear. The voltage tends to tail off rapidly as the battery nears the end of its life (Figure 2). 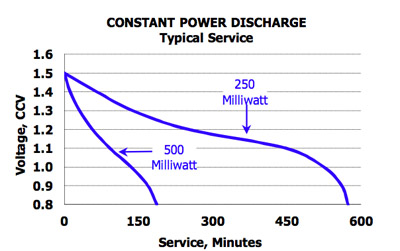 The DC/DC converter requires a minimum voltage to operate correctly. To ensure that the power module doesn’t attempt to operate below that limit, manufacturers incorporate undervoltage lockout mechanisms into their products. A partially-depleted battery supplying a large in-rush current will struggle to cope and its supply voltage will likely drop below the undervoltage threshold – with the result that the product fails to start up.

Worse yet, the cell may recover, such that the device’s battery gauge indicates it still has some capacity left, only for the process to repeat itself when the user tries to switch on the product again. The likely conclusion is that the owner will swap out a serviceable battery while questioning the product manufacturer’s battery lifetime claims. All the work the engineer has done to maximize the efficiency of the product to extend battery lifetime will be wasted.¹

Silicon vendors promote the high efficiency of a switching power module as one of the key reasons for selecting such a component for a battery-powered product. Accordingly, they are not keen to see the extra battery life promised by high efficiency negated by in-rush currents.

The vendors’ answer is to implement soft-start regimes. In simple terms, soft starts control the rate of current build up and stop it from overshooting a pre-determined value that neither stresses components nor causes system malfunctions.

Step-down (“buck”) converters sometimes use a simple soft-start regime that relies on a maximum current detector. The maximum current limit is released after a fixed time or at a set output voltage. The advantage is that the chip remains in its normal operating mode at all times; however, the drawback is that current can still increase rapidly (even though the peak value is limited) causing the battery voltage to drop and the undervoltage mechanism to activate if the battery has little capacity remaining.

An alternative approach for a buck converter is to limit the rate at which the output voltage increases and prevent it from overshooting a set point (or at least minimize the overshoot). This limits both the rate at which the in-rush current escalates and helps prevents battery voltage dipping so dramatically that the undervoltage mechanism triggers.² 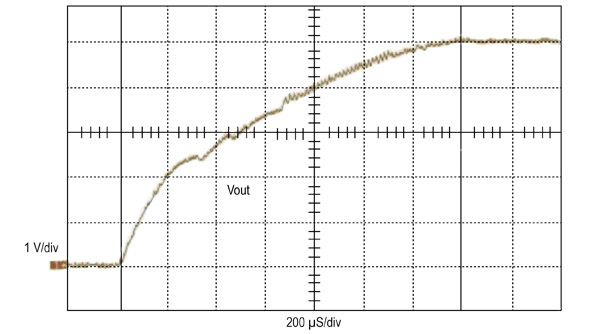 The maximum current threshold and output voltage set point will vary depending on the application. Some manufacturers have made module selection easier by allowing the engineer to select the maximum current such that a single converter can be used in a range of applications.

For example, ams’ AS1326 boost converter allows both the selection of the maximum current during startup and soft-start time constant. Figure 4 shows the soft-start circuitry implemented. The engineer selects two resistors (Rss and Rss2) and a capacitor (Css) to set the current limit (ILIMIT) and time constant (tss). 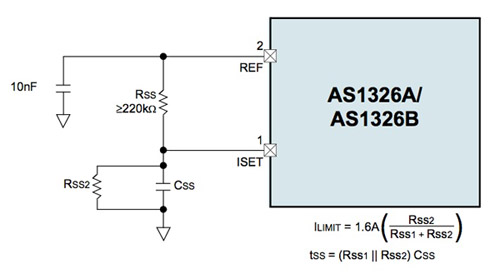 Figure 4: A current limit and time constant for soft start can be implemented with a simple application circuit for ams’ AS1326.

For its part, Linear Technology offers the LTC3609 among its products with soft-start capability. The module is a buck DC/DC converter that can deliver up to 6 A output current from a 4 to 32 V input supply. Soft-start capability is accomplished using an external timing capacitor and the converter’s current limit is user programmable.

In summary, in-rush current is the spike of current drawn by a power supply when it is turned on. There is a natural concern that high spike currents can create electromagnetic interference in adjacent circuitry, or trip an upstream circuit breaker or the overcurrent protection of a solid-state power controller.

As we’ve seen, DC/DC converters can employ a well-controlled internal startup sequence and a precise output voltage soft start feature. The voltage soft start feature ensures the output ramps up in a controlled manner, with limited dv/dt. This article has highlighted several such parts as well as one where the supplier allows both the selection of the maximum current during startup as well as the soft-start time constant. For more information on the products mentioned here, use the links provided to access product pages on the Hotenda website.