Making the World Healthier and Safer through Sensor Innovation

Discover how sensors are making the world a healthier and safer place in applications ranging from heart-rate monitors to vehicle-crash detectors.

Used in a variety of applications ranging from heart-rate monitors to vehicle-crash detectors, carbon-monoxide indicators to human bladder-pressure measuring devices, a wide range of powerful, reliable, and less costly sensors have emerged whose paramount application is to mitigate injury and reduce or predict health risks at a time when people are increasingly looking for new ways to take control of their personal well-being in order to live healthier and better lives. This article will examine existing designs as well as those on the drawing board which, without these sensors, could never exist, no less help to avoid loss of life. All parts, data sheets, tutorials, and development systems referenced here can be found on the Hotenda website.

Fitness and vital-sign medical sensor applications have been on the market for a while now, but new developments are taking sensors further into untapped medical environments. For example, physiological monitoring could help in both diagnosis and ongoing treatment of a vast number of individuals with neurological, cardiovascular, and pulmonary diseases such as seizures, hypertension, and asthma.

Recent developments in the field of microelectronics have allowed researchers to develop miniature circuits entailing sensing capability, front-end amplification, microcontroller functions, and radio transmission, all in a wearable form-factor (for example, the flexible ECG unit from IMEC, shown in Figure 1). 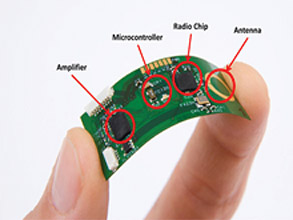 Figure 1: A flexible wireless ECG sensor with a fully functional microcontroller by IMEC.

Philips, working in conjunction with Nijmegen, NL-based Radboud University Medical Center, has come up with a new wearable diagnostic device for people suffering from chronic obstructive pulmonary disease (COPD). Once a COPD patient has left the hospital, the diagnostic prototype that uses a biosensor module worn inside a disposable adhesive patch, collects data day and night – including physical activity/inactivity, respiratory indication, heart rhythm, and heart-rate variability. This data is then sent via the cloud to the company’s HealthSuite Digital Platform, where it is shared with the appropriate care providers via a patient portal app accessed via a tablet and presenting a more complete view of the patient’s illness.

Sensors are being successfully used in the treatment of sleep apnea where pauses in breathing take place at a rate of up to 30 times per hour. An example used in sleep-apnea monitors is the Honeywell AWM90000 Series microbridge mass airflow sensors (Figure 2) , available in two versions – the AWM92100V has a flow range of ±200 SCCM with a pressure drop of only 0.49 mbar/ 49 Pa/0.007psi, typically, while the AWM92200V is a differential pressure version.

The sensors have a 1 msec response time, operate with a supply voltage from 8.0 VDC to 15.0 VDC, and consume a mere 50 mW of power, specs well suited for battery-powered monitors.

In medical monitoring, vital statistics are being taken automatically via sensor-based devices such as the highly accurate Analog Devices AD8232 Singe-Lead Heart Rate Monitor front end, (Figure 3), which operates without noise interference present in the environment. 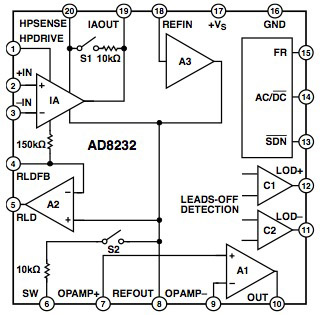 Figure 3: A block diagram of the AD8232 by Analog Devices.

The device extracts, amplifies, and filters small bio-potential signals in the presence of noisy conditions created by remote electrode placement or even patient motion. The output signal is easily acquired via an ultra-low-power analog-to-digital converter (ADC) or embedded microcontroller (MCU).

For many years, researchers at Norway’s SINTEF have been working on developing tiny sensors for measuring pressure in the body.  When the chance to work closely with Sunnaas Hospital (Nesodden, Norway) came up they decided to focus on measuring pressure in the bladder, which is essential in order to see whether an operation is necessary, or whether the condition can be treated with medication. The measurements reveal how the bladder fills and empties.

Currently, measurements are taken using a catheter which is inserted into the urethra so that the bladder can be filled with water. This is uncomfortable for the patient, and since the bladder is filled with saline at an unnaturally high speed, the method is also unreliable. Unlike a catheter, their tiny new pressure sensor can be inserted under the skin and into the bladder.  The sensor is positioned without causing discomfort to the patient, who can then move about normally without the disruptive catheter, and the risk of infection is reduced.

At the moment, the sensor is connected to a thin wire, but the next step would be to make it wireless. Another long-term option could be to allow the measurements to be read by a smartphone.

Other, tiny implantable sensors have been developed to: detect blood and pressure inside the skull; provide constant monitoring of blood sugars for diabetics; and allow a medical-quality wearable to measure stress, epileptic seizures, activity, and sleep. All of these have already come to market.

What’s more, ingestible sensors as small as a grain of sand are being used to measure chemicals not only for diagnosis, but more commonly to see if a patient has missed a dose of their medication.  Also, tactile sensors that can “feel” an anomalous growth, for example, may be able to revolutionize early warning in cancer patients are also on the drawing board.

Typically we think of automotive and medical apps as completely different, but there is one life-saving sensor application that straddles the two. Wearables that measure heart and respiration rates and fatigue can be located in seat belts and seat covers, respectively. If the driver is falling asleep, an alarm is going off before they lose control. When fatigued or drowsy, breathing and heart rate tends to vary from normal so that a sensor-based system can accurately monitor and alert the driver before it’s too late.

To help provide design engineers with quick and convenient access to sensor systems for evaluation purposes, taking some of the guess work out of the

Moving from hazards that involve the body and safety, there are many sensors used in hazardous environments — and the list is growing. For example:

Sensor technology for health and safety is being embedded into a wide range of applications where they can be extremely effective. These include the medical devices we use, the cars we drive, and the environment in which we work where safety sensors and systems play a vital role to ensure safety of employees and workers in factories. The list continues to grow and as the sensors used become smaller, feature greater reliability and accuracy and (because of volume) lower cost, the market for health- and safety-related sensor systems can be expected to grow multifold. For healthcare applications alone the sensor market is expected to reach $13.11 billion by 2017 (Source: marketsandmarkets).