LEDs are becoming more popular as a general lighting solution.


Light-emitting diodes (LEDs) rightly have a reputation for endurance, durability, and excellent energy efficiency, but even now, as LEDs are becoming more popular as a general lighting solution, engineers and scientists are developing techniques to make LEDs even more efficient.

LEDs, of course, are thin-film semiconductors that emit light when an electrical current is applied. Defects in the semiconductor materials used to manufacture LEDs can impede the flow of electrons, resulting in some loss in terms of light output.

To try to compensate for these defects and thereby increase the light output and overall LED efficiency, Dr. Salah Bedair, a professor of electrical and computer engineering at NC State, and Nadia El-Masry, an NC State materials science professor, have proposed introducing "voids" into semiconductor materials like gallium-nitride (GaN) films.

Figure 1: The NC State technique reduces the number of defects in GaN films by two to three orders of magnitude -- increasing the output of light by a factor of two for a given amount of power. (Image courtesy of Lukasz Tylec via NC State News Service).

"This improves the quality of the material that emits light. …So, for a given input of electrical power, the output of light can be increased by a factor of two – which is very big," said Dr. Bedair.

The defects in question amount to minor variances in the GaN film's crystalline structure. These variances or "dislocations" tend toward the material's surface. With this in mind, Bedair and El-Masry introduced relatively large empty spaces or voids (approximately 0.25 µm in diameter) into 2-µm GaN film. The idea was to draw defects to the voids which represented internal "surfaces."

"Without voids, the GaN films have approximately 1010 defects per square centimeter," Bedair said. "With the voids, they have 107 defects. This technique would add an extra step to the manufacturing process for LEDs, but it would result in higher-quality, more-efficient LEDs."

Results were even better when the "voided" films were used for ultraviolet emitting LEDs or LEDs used in low-power scenarios.

Of course from an LED manufacturing perspective, there are still many questions that need to be asked about these NC State findings, including if the added efficiency is actually worth the additional process step, but nonetheless, the research demonstrates that LEDs are likely to continue to improve in ways that alternative or incumbent general lighting solutions will not be able to match. 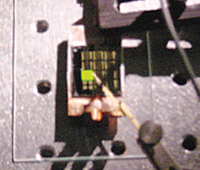 There are two basic approaches to making white light with LEDs. The first and relatively less efficient method uses phosphor conversion in a way similar to fluorescent lighting solutions. A blue or ultraviolet LED glows, passing energy or "charging" a phosphorescent substance that has been applied to the light, bulb, or luminare. The phosphorescent material in turn produces the visible white light.

A second method seeks to mix light emitted from red, green, and blue (RGB) LEDs, making white light more efficiently. Unfortunately, according to NREL "to date, RGB research has not produced high-quality white light because of a lack of deep green LEDs. This Achilles heel is commonly known as the ’Green Gap,’ referring to the inability of current LEDs to produce light in the wavelength range of 530 to 570 nanometers (nm)."

NREL researchers were able to produce an LED that emits light at a wavelength of 562 nm using a "gallium indium phosphide (GalnP) alloy grown on a gallium arsenide (GaAs) substrate," NREL said in a report. "This type of lattice-mismated GalnP/GaAs tandem device" can produce deep green light that in turn can be used in RGB-process white light solutions.

Again, there is still work to be done, but LED technology will likely improve in this area too.

NC State and NREL's research are just two examples of how LEDs are likely to improve. This capacity to add efficiency on top of efficiency really sets LEDs apart from competing technologies — for example compact fluorescent bulbs —that seemingly are not as likely to advance as quickly or match LEDs' pace.