Designers know there are a myriad of choices for sending data wirelessly. These include simple command and control schemes, such as Remote Keyless Entry (RKE) and garage door openers, and the more complex WLAN. This article presents various options and their limitations as they pertain to choosing a wireless network for industrial applications.

RKE systems are used in automobiles to lock and unlock doors, offering an excellent example of simple command and control applications. In an RKE application, a command is sent from a key fob to a car receiver. In response to a properly received command, the car is either locked or unlocked.

Receivers in similarly made automobiles can theoretically accept packets sent from any similar model key fob. However, the car will only accept commands from the unique key fob assigned to it. Security protocols like rolling code generators and security encryption are utilized to transmit a unique ID from the key fob to the car. In this way, a driver’s key fob is not able to unlock a similar model car.

In the case of automobile RKE, the key fob operator typically hears the locks being engaged. If this audible feedback "click" is not heard, the operator simply presses the button again, completing the feedback loop. To put it in simple terms, if you don’t hear the car unlock, you press the button again until you do.

The need for this type of acknowledged receipt of data dictates that a two-way network be used. The level of system complexity immediately goes up as the need for more actuators, switches, and motors become necessary. Thus, the use of simple one way RKE networks is usually not implemented for industrial networks, due to the need for acknowledgment that the data sent actually got through.

ZigBee® has received a lot of attention. As a standard, ZigBee or IEEE 802.15.4 initially appears to be an excellent choice for many low power, low data rate wireless communication applications. However, ZigBee is not a one-size-fits-all technology. There are circumstances where 802.11 WLAN will work well with high data rate traffic. Further, there are applications that require longer range and more battery life. In short, specific architectures will drive the type of wireless network chosen for any given application.

In wireless networks, as the data rate increases, there is a corresponding increase in system resources. For example, with respect to 802.11 WLAN, these protocols will not work for most embedded applications due to power consumption and the code size needed for a network. A typical 802.11 WLAN node requires up to 1 MByte of program memory and a higher functioning processor to make even a single functioning node.

The relatively low-power consumption of the 802.11 WLAN radio plus a system processor make it well suited to computing applications and the backhaul of information on an industrial network. However, portable nodes suffer from the amount of power required and system resources necessary to realize a functioning node of 802.11 WLAN. Tasks, such as remote monitoring of temperatures, pressures, and actuation cannot allow for the large power consumption, code size, and expense of 802.11 WLAN.

ZigBee protocols are relatively modest with respect to code space (32 to 70 KByte), and they enable a moderate range (10 to 100 meters). These attributes make ZigBee a good first choice for industrial networking. One of the major benefits of ZigBee is its "mesh" capability. Mesh networks pass messages from node to node. If any of the nodes fail or drop out, the message can still reach its intended destination. Mesh networks require sophisticated handling of packets and therefore more program memory. Figure 2 illustrates the relative code size of several different wireless networking protocols. 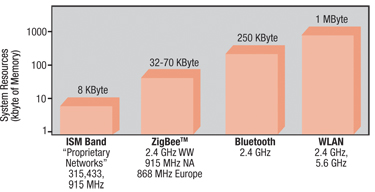 
Bluetooth® is another option that is considered for industrial applications. However, the short range and the sizeable code requirements, along with the fact that Bluetooth is a point-to-point communication scheme, remove it from the list of possibilities.

Then there are proprietary networks, operating independent of standards, to consider. These typically fall in the 915 MHz and 2.4 GHz ISM bands. Occasionally, 315 MHz or 433 MHz are also used for command and control applications. Local regulatory requirements often dictate which frequency can be used.

As an RF signal travels through the air, its power level decreases at a rate inversely proportional to the distance traveled and proportional to the frequency. The free space path loss equation is shown below along, with a corresponding graph of path loss versus distance for various frequencies, in Figure 3. 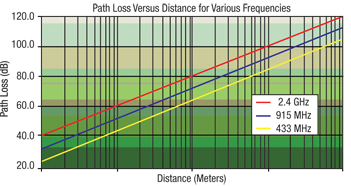 
At 100 meters, the following path loss is present for a transmission in free space:


In RF systems, the received signal is the sum of the transmitted power plus the antenna gain of the system less the path loss, as shown in the following equation:

For a system that puts out 10 dBm of power and has an antenna system gain of zero, one would calculate the received signal at 100 meters of ideal free space to be:


This means that the receiver for a 2.4 GHz system must have at least -70 dB sensitivity in order to detect signals in the ideal free space environment.

In addition to free space path loss, the transmitted signal also has attenuation due to buildings, vegetation, and other objects. Additional challenges, such as multipath and signal dispersion, are factors as the receiver attempts to decode the incoming RF signal. Other path loss models, such as the Hata Model, take into account the distance of the antenna above the ground and losses due to the effects of being in an urban area; these models yield more realistic indications of path loss. Actual path loss numbers are considerably higher for most applications than what is depicted in Figure 3. Interestingly, as the frequency increases, so does the path loss. This is one reason that 2.4 GHz systems exhibit less range than comparable 915 MHz or 433 MHz systems.

Data rate also plays an important role when choosing the frequency and modulation for an industrial network. As previously discussed, remote temperature monitoring and actuation applications function best when constructed with proprietary networks running small software stacks at low power. The ability to customize the data packet for the intended application can greatly simplify these proprietary networks.

The range, or reach, of wireless solutions using ISM band proprietary networks is often much better than what can be realized with ZigBee, Bluetooth, or WLAN. In addition to the reduced path loss of proprietary networks operating at lower frequencies, other factors can increase the range of such networks. Smaller data packets, lower data rates, and the ability to send multiple copies of the data are all reasons that proprietary networks often outperform standards-based networks. Figure 4 shows a comparison of reach versus technology for different wireless networks. 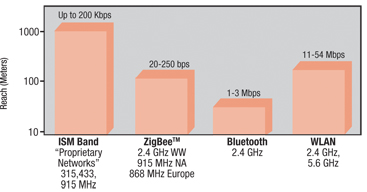 
The power consumption of ZigBee and ISM band proprietary networks is more in line with the expectations of industrial networks for remote monitoring of temperatures, pressures, and actuation data. A ZigBee node can be expected to survive about a year on a pair of AA batteries, while nodes utilizing proprietary ISM band protocols can easily last a decade using the same power source. The reason for extended battery life of ISM band solutions is the ability of the designer to choose the duty cycle of the data and thus customize the solution to the situation.

The worldwide accepted frequency for ZigBee 802.15.4 systems is 2.4 GHz, using direct sequence, spread spectrum (DSSS) O-QPSK as a modulation scheme. ZigBee radios are also allowed at 915 MHz DSSS in the Americas and 868 MHz DSSS in Europe; these frequencies use BPSK as a modulation scheme. The majority of ZigBee solutions to date operate at 2.4-GHz. The 2.4-GHz band has become overcrowded due to its worldwide usage for many wireless devices, including microwave ovens. The more sparsely populated ISM bands of 915, 868, or 433 MHz offer a viable alternative to crowded 2.4 GHz wireless solutions and should be considered.

The 2.4 GHz band requires a shorter antenna than does 915 MHz or lower frequencies. This is the reason that many WLAN routers require two antennas (three for 802.11g at 5.6 GHz). Reflections and multipath cause nulls in the 2.4 GHz transmissions. Networks realized using lower frequencies such as 915 MHz do not demonstrate as much multipath and associated nulling, and therefore work very well with a single antenna.

Many applications at 915 MHz or below will do well with an onboard stripline PCB antenna. This reduction of antennas helps diminish overall system cost and provides another reason that networks outside of 2.4 GHz are often chosen for low cost and longer range industrial networks.

Other options available in the ISM band include proprietary RF networks using on-off keying (OOK), amplitude shift keying (ASK), and frequency shift keying (FSK) modulation schemes. These networks often have benefits that engineers simply cannot overlook. Micrel presently offers transceivers in the 310 MHz to 950 MHz bands which can perform many of the RKE and two-way wireless network functions in the ISM band. The challenging aspect of a wireless network is the software stack used by the microcontroller. This last bit of engineering is where many RF designs get derailed.

Micrel has made available as generic C source code an FCC 15.247-compliant protocol for frequency hopping, spread spectrum (FHSS) utilizing the MICRF505 FSK transceiver chip. This software is called MicrelNet™ and provides for FHSS modulation in a 250 KHz bandwidth utilizing 25 frequency hops. The MICRF505 chip has an onboard power amplifier which allows for -3 dBm to +10 dBm transmission to an antenna without an external transmit/receive switch. With the onboard PA of the MICRF505 set to 10 dBm, ranges of up to 200 meters are easily achieved for data rates of 9.6 Kbps.

Figure 5 illustrates the multiple carrier frequencies in an FHSS system. All nodes are synchronized to allow for hopping. If there is a bad or used frequency, the system simply hops to the next frequency to get the information. The software stack is ultimately responsible for reassembling packets that are sent between nodes. An IP addressing scheme in MicrelNet allows for easily recognizable source address and destination address formatting of data packets. Software CRCs ensure data delivery.

FCC 15.247 allows FHSS radios at 915 MHz to have an output power of up to 250 mW, which equates to 24 dBm into a 50 antenna. With the addition of an external PA and transmit/receive switch, power levels of 250 mW are possible with the MICRF505 transceiver chip. At 250 mW output power, the MICRF505 has demonstrated ranges of up to 2 Km for data rates of around 10 Kbps in line-of-sight applications.


The MicrelNet code stack can run in 8 KBytes of memory on an 8-bit microcontroller. Many industrial wireless networks are added to enhance existing RS232 type networks controlled by small, low-power MCUs at each node. The ability to add large sections of code is often not an option, due to the restricted flash memory size of small, low-power MCUs. The 8-Kbyte code size of MicrelNet is much smaller than a corresponding 802.11 WLAN (1 MByte) or ZigBee (32 K to 70 KByte) stack.

MicrelNet operates in a cluster tree network, with one central master capable of communicating with other masters in a network of up to 65,000 slave nodes. This is similar to ZigBee, except that ZigBee is a mesh network where any node can find a way to talk to any other node. Mesh networks are possible with the MICRF505, but require additional software resources, similar to those discussed for ZigBee implementations. Figure 6 illustrates various wireless network topologies and the number of nodes supported by each.

In wireless industrial networks, the application and environment ultimately dictate what type of network makes the most sense. The choices of frequency, protocol, and power consumption are key elements in the decision process as they affect range, system resources, and ultimately, the cost of the solutions. 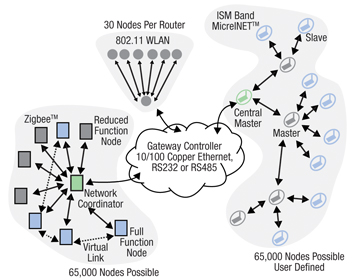 
Protocols such as 802.11 WLAN, ZigBee, and proprietary schemes such as MicrelNet can all co-exist. The emergence of "gateway controllers," as shown in Figure 6, enable various wireless networks to communicate on the most common of all networks, 10/100 copper Ethernet. A good example of such a gateway controller has been assembled and proven at http://www.micrel.com/wirelessgateway and is available to view and download.