Wireless networks are becoming the default connectivity option for embedded systems as well as for mobile/portable devices.


Wireless networks are becoming the default connectivity option for embedded systems as well as for mobile/portable devices. These systems utilize a number of data formats and networking styles ranging from mesh networks to peer-to-peer networks to full LAN/WAN environments. There are two main categories for these networks: M2M (machine-to-machine) communication and user-driven (C2N computer to network) communication. The increase in sensors is driving the M2M world to traffic levels that rival content consumption. This requires embedded systems have autonomous communications systems that can work in parallel with existing functions and handle the networking side without active administration.

A recent report indicated that the connected world will soon support over 50 billion connected devices.1 By the year 2020 there will be: The majority of these devices will not be user-operated but rather machine-to-machine connected devices. These autonomous connections will be sending small packets of data on a continual basis to a cloud-based network of receiving equipment that will then analyze and respond to the data.

The next phase of connectivity will be the feedback from these networks to the devices to act in response to the analysis performed on the data. These devices are being deployed in three waves: networked consumer electronics, networked industries, and networked everything else (see Figure 1). 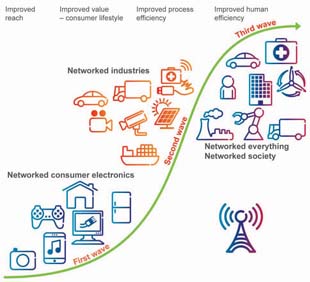 The devices in the networked industries (second wave) are targeting both improved value in the user lifestyle and also improved process efficiency. The majority of these devices use a different data model than a user/computer-to-network interface. Consumers who connect to the network do so to transfer large amounts of content – video, audio, high-resolution still images, and large technical/business documents. The M2M communication, on the other hand, tends to be small packet transfers of status, update, and situational data. These data streams are manageable with wireless protocols such as IEEE 802.15.4, IEEE 802.11, and Bluetooth® rather than traditional wired IEEE 802.3 and IEEE 802.14 networks.

The industrial and the home automation marketplaces have a standard Ethernet-based structure for their network configuration. The configuration is based on the sensors and information being gathered by the machine, which then sends it to a centralized processor. This centralized processor handles both the data packet preparation as well as the network interface handshake. Since the central processor is handling the network interface, this enables the connection path to be autonomous and highly reliable. This architecture also supports multiple OS's and RTOS environments since the I/O for the networking is a standard function around the processor core.

A key to constructing the system is selecting the correct network protocol to minimize both the data flow and the loading of the system resources. These networking components are available in two forms – a full standalone networking interface with local processor and MAC or a network PHY block that has the MAC and software protocol stack handled in the system processor. The selection of which system to use should be based on the processing bandwidth and capability of the embedded system processor, how often data is sent, how much data is sent, and how much traffic is on the network.

It is important to understand how the different networks work. The 802.11 interfaces are full of Ethernet protocols with single or multiple antennas and radios that connect with and without wires. Using all available options incurs the highest overhead but supports the largest amount of data. To understand how to connect with this protocol, several primers are available on the Hotenda website. The information provided in the Microchip Embedded Ethernet product training module gives an overview of the IEEE 802.11 connection standard and how the products should use the interface.

Similarly, the mesh networks that are part of the ZigBee protocol are explained in additional training materials from Freescale. These materials include a ZigBee® product training module, Freescale ZigBee Solutions, and a Freescale ZigBee Technology Overview. Finally, National Semiconductor provides training on the point-to-point Bluetooth network interface. Their LMX9838 Bluetooth module has a product training video that explains the basics of the protocol and how to properly transfer data.

The standard computer-to-network communication format for wireless is 802.11. For the embedded applications, a single antenna and radio system uses the b and g version of the protocol. These networks are generally used for those systems with big data – position, location, multiple sensors, image data, voice and sound data, and communication with an operator. When used with an operator, there are generally two protocols running: the 802.11 data channel for computer-to-machine communication and a secondary, lower bandwidth channel – generally wireless USB or Bluetooth – for operator-to-computer communications. These transfer protocols can be implemented with two modes: embedded and standalone.

On the embedded side, the wireless connection is made with a transceiver and an analog front-end (PA, LNA, MUX, etc.) radio and antenna. Transceivers, such as Quatech/DPAC Technologies’ Airborne WLNG-BR-DP551, are available in full server form with control software and firmware, so the units can be integrated into the system design as a standard I/O function (see Figure 2). The interface to these transceiver modules is typically from internal data memory through a dual UART via SPI as a direct attach to the embedded processing core of the device. For standard I/O interface to the core system, the devices use a serial port (RS-232/422/485) or a 10/100 Ethernet PHY. The transceiver blocks contain the following: 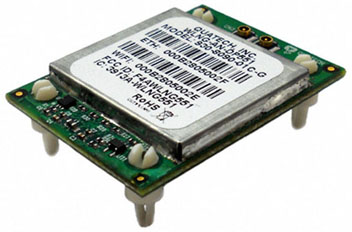 The second component set for this interface is the actual analog RF component. Since the channel spacing for the baseband frequency is small, different amplifier pairs are required for different frequencies. The 802.11b and g specifications use a 2.4 GHz-centered base band frequency, as does Bluetooth. Products like Skyworks Solutions, Inc.’s SE2611T have the multiple blocks for the simultaneous use of both 802.11 protocols and Bluetooth (see Figure 3). While the RF function can be created with individual pieces, front-end modules (FEMs) are popular since they integrate the functionality of the power amplifier, power detector, notch filter with associated matching, switch, and low noise amplifier along with the a bonus Bluetooth port. This leaves only the connection to a standard 50 Ω antenna to complete the interface. 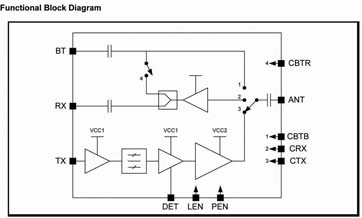 By using the integrated part along with a known transceiver, FCC and environmental certifications for the systems are already addressed, saving both time and money. Separate front-ends are required for the 5 GHz base band of 802.11n, such as the Skyworks SE5007T (see Figure 4), which do not include Bluetooth due to the band difference.

Most M2M communication will use Bluetooth, ZigBee and SNAP formats for the primary networks on low data rate connections. The key features are the small data sets. The protocols for these data formats are based on the standard TCP/IP interface, and they have sub-protocols for their own data format. Figure 5 shows how the Bluetooth stack overlaps with the standard protocols. The Bluetooth modules are slightly different from the 802.11 interfaces. Unless they are integrated into the core processors with a shared RF front-end, the Bluetooth modules tend to interface with USB. 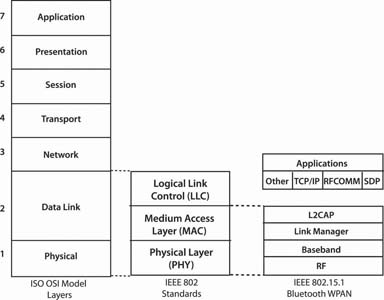 The modules from companies such as Roving Networks, Inc.’s RN-270M, Laird Technologies’ BRBLU03-010A0, and BlueRadios, Inc.’s BR-USB-BTV2.1 Bluetooth adapters typically use the USB interface. These modules include full Bluetooth v2.0 general purpose interfaces that feature complete transceivers, adaptive frequency hopping capability for finding interference-free wireless channels, are high speed (up to 3 Mbps), have built in antenna hysteresis to support up to 300 meters of connection range, and have full plug-and-play compatibility with Windows® independent of processor core type. The Bluetooth radios operate on a point-to-point basis and require the outlying machine to talk directly to either a repeating access point or the main processing computer that holds the repository for the data collected. 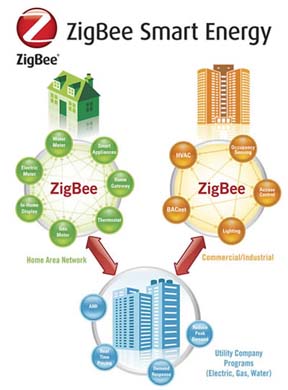 A more common connection than the point-to-point is the mesh network. These are covered under the IEEE Standard 802.15.4. These devices communicate not between a single device and a home location but between each other as peers, though data can hop through the network to reach the home location. This method is very reliable and allows for large distances to be covered, since the range between devices is the limiting factor, not the much longer distance from the home location to the end device.

There are several different protocols derived from IEEE Standard 802.15.4. The most popular one is ZigBee. This, like Bluetooth, uses a standardized PHY block and radio and then supports a MAC layer with an application layer on top. The flexibility and high reliability of this format – available as transceivers, development kits, full radio kits, and embedded modules from multiple suppliers like Atmel, Panasonic, Digi International, Rabbit Semiconductor, and NXP Semiconductors – has made it the network of choice for smart energy monitoring. Figure 6 shows the ZigBee Smart Energy infrastructure that includes home network appliances, office network appliances, and utility companies all connected as a single distributed mesh network with the outside connections made through the smart meter to the grid interface. In some cases, this smart meter is actually connected to the utility not through a wireless link but through a power line network connection. ZigBee and 802.15.4 networks inter-operate with other 802 network protocols to enable complex network configurations.

Another alternative to the ZigBee protocol is the SNAP network. SNAP is also an 802.15.4 mesh network and supports the same PHY blocks and radios. Synapse Wireless has created finished transceiver modules and transceiver/gateway modules that operate in both the 2.4 GHz and 900 MHz band (see Figure 7). A unique feature of these modules is the self-configuration capability. They include a fully embedded Linux 32-bit control processor that allows connections from USB 2.0 and 10/100 Ethernet, which it then configures with DHCP to the TCP/IP stack. The technology can be managed with a centralized console and free downloadable software. SNAP utilizes mesh network connectivity to span large distances and bring disparate devices into a common industrial network. 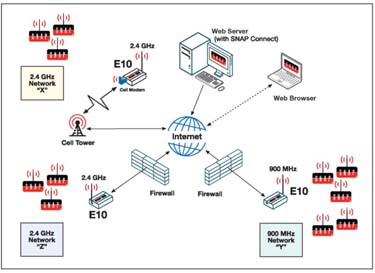 The rise of M2M communication is now enabling embedded controllers to be not only networking aware, but also autonomous and self-sufficient. The resulting design architectures allow for the parallel integration of these wireless protocols and their embedded security features in addition to their standard control functions. Whether you choose to design and build your own RF chain or purchase a certified front-end module, the solutions mentioned in this article should help ensure a successful and relatively painless implementation.