This article discusses the designs and specifications of low-power wireless wearable devices and provides component solutions from TI and InvenSense.


Wearable technologies now span a wide range of end applications — from electronic jewelry to smart watches, smart glasses, fitness devices, smart clothing and shoes, medical diagnostic tools, and electronic tags — to name a few. In the design of these devices there are several major hurdles that must be overcome: reducing power consumption, lowering cost, and specifying long-life batteries. These three major issues must come together for systems to run for weeks or months without recharging or replacing the batteries, and to make the systems inexpensive enough so a large number of users can afford to buy the devices.

Low-power wireless communication interfaces such as Bluetooth Smart (also referred to as Bluetooth low energy, or BTLE) and low-power Wi-Fi are the two dominant connections for transferring data between the wearable device and either a smartphone, tablet, or other connected platform. Additionally, power-frugal embedded processors and sensors all must work in unison with the communications link to deliver the desired functions at a cost that lets the product enter the mainstream and get widely adopted.

Today, the wearable electronics business is estimated to be about $14 billion, and by 2024 experts project it will grow to over $70 billion, with the dominant sector expected to be products for the healthcare sector. That sector includes medical, fitness, and wellness products that will sense, collect, and transfer biomedical, physical, and in some cases, location data (GPS), to a host system.

Two of the largest market segments — sports and fitness on one hand, and health and wellness on the other — have some overlap. They both use similar sensors for collecting data, and that data is forwarded to a smartphone or other host. However, there are also some differences that will impact the design of the products. For example, in the sports and fitness market, data and activity sharing by wireless connection is more common as users often share their results for bragging rights or to compare their results to that of others.

However, in the health and wellness market, where disease management is private (often just between the individual and their doctor), data is rarely shared and is usually carefully guarded. Thus, for health and wellness applications, there should be more security in the wireless link. Additionally, with all the malicious hacking that takes place, wearable medical products should also include some type of firewall to prevent hackers from accessing the device and changing the settings.

What’s in the wearable

When you examine any of the wearable sports or medical devices, you will find that the internal functionality is basically the same no matter which device you examine. The active circuits in the device will typically include a low-power embedded processor, a wireless communications interface (BT Smart, for example), various sensors (motion, pressure, temperature, and more), a battery or supercapacitor to power the circuits, and possibly some type of display (Figure 1). Of course, the components selected for each section of the wearable device will vary based on the required performance and functionality that device is designed to deliver. 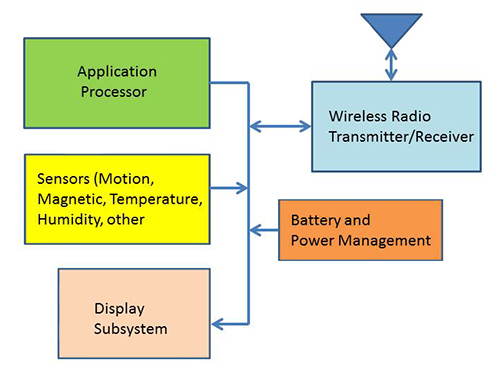 Figure 1: A typical wearable device contains five major functions — an embedded processor that runs the application code, a wireless interface such as Bluetooth Smart or Wi-Fi, one or more sensors to collect the data, an LCD display or indicator LEDs, and a battery with power-management support.

The choice of embedded processor can range from a simple 8-bit microcontroller for a system that has minimal functionality, to a full 32-bit microcontroller or an ASIC that contains a processor core from ARM, MIPS, or another vendor. Low-power microcontrollers from a variety of vendors can operate at microwatt power levels and consume just nanowatts on standby. For example, the MSP430F2001IPWR, a member of the MSP430 family from Texas Instruments, was designed for ultra-low-power consumption — during power down it draws just 0.1 µA, while on standby it draws 0.8 µA. When active, current consumption varies depending on clock frequency, but when delivering a throughput of 1 MIPS, the microcontroller consumes just 250 µA. In many sensing applications, the processor will typically only be active for a short period to take a sensor reading, and then it will go back to its standby mode. Thus the average power is very low since most of the time the processor will be in standby (Figure 2). 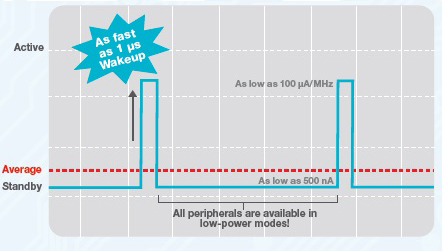 The MSP430 family is based on a proprietary 16-bit RISC processor architecture and integrates from 1 to 128 Kbytes of Flash storage. There are over 100 members in the family and the 16-bit core can perform advanced signal-processing functions not possible using conventional 8-bit microcontrollers. On-chip peripherals include 10 to 16-bit A/D converters, comparators, D/A converters, LCD drivers, SPI, I²C, and other I/O ports, and supply voltage supervisors.

To match the low power of the microcontroller, low-power wireless BTLE radios can deliver sub-microamp standby levels and consume just a few milliamps when active. For example, the CSR1010 from Cambridge Silicon Radio consumes less than 900 nA in its dormant mode and 16 mA peak (from a 3 V supply) when the receiver and transmitter are active. The circuit also has several low-power modes in-between the minimum and maximum — Hibernate, Deep Sleep, and Idle, which consume less than 1.9 µA, less than 5 µA, and about 1 mA, respectively. 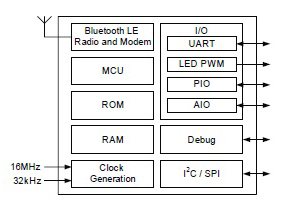 Figure 3: A complete wireless transmitter and receiver, the CSR1010 from CSR Ltd., not only contains the radio subsystem, but an embedded processor to execute the BT protocol stack, ROM and RAM for program execution, and various I/O lines, yet consumes less than 900 nA in its dormant mode.

Adding sensors into the mix, multiaxis sensors such as the InvenSense provide nine-axis motion inputs for activity detection. The MPU-9150 is the world’s first integrated nine-axis Motion Tracking device that combines a three-axis MEMS gyroscope, a three-axis MEMS accelerometer, a three-axis MEMS magnetometer, and a Digital Motion Processor (DMP) hardware accelerator engine (Figure 4). The DMP combines acceleration and rotational motion plus heading information into a single data stream for the application. This integrated Motion Processing technology provides a smaller footprint and has inherent cost advantages compared to discrete gyroscope, accelerometer, plus magnetometer solutions. The current drain for the nine-axis device is typically about 3.9 mA when operating. 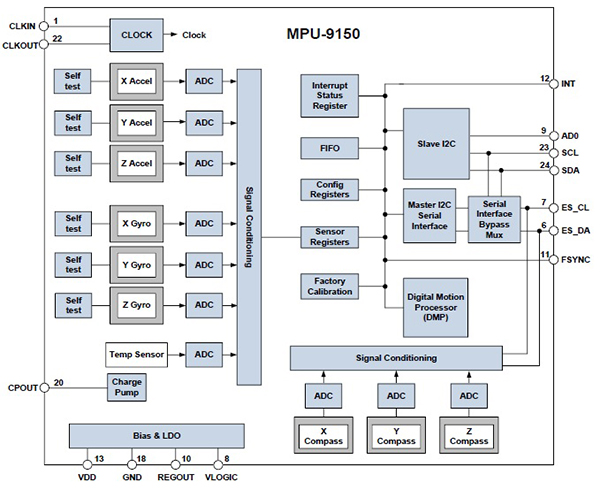 Figure 4: A nine-axis motion sensor, the MPU-9150 from InvenSense contains three accelerometers, three gyroscopes, and three magnetic sensors, as well as Digital Motion Processor that combines all the sensor outputs and delivers a single data stream to the host processor.

The MPU-9150 features three 16-bit analog-to-digital converters (ADCs) for digitizing the gyroscope outputs, three 16-bit ADCs for digitizing the accelerometer outputs, and three 13-bit ADCs for digitizing the magnetometer outputs. For precision tracking of both fast and slow motions, the parts feature a user-programmable gyroscope full-scale range of ±250, ±500, ±1,000, and ±2,000 °/s (dps), a user-programmable accelerometer full-scale range of ±2, ±4, ±8, and ±16 g, and a magnetometer full-scale range of ±1,200 μT. The MPU-9150 is actually a multchip module (MCM) consisting of two dies integrated into a single LGA package. One die houses the three-axis gyroscope and the three-axis accelerometer. The other die houses the AK8975 three-axis magnetometer, which is produced by Asahi Kasei Microdevices.

Of course, in addition to the hardware, all the wearable devices depend heavily on the software that they must execute — the user interface, the application program, additional I/O drivers, and so on. Selecting the right subsystem solutions must take all the options into consideration, as well as perhaps providing additional overhead for future upgrades without a major redesign.

In summary, wearable technology is making inroads into many facets of our lives, from sporting goods and fitness products to medical monitoring systems. Many of these wearable devices leverage the low-power Bluetooth wireless interface to link themselves to a smartphone that the wearer keeps in a pocket or purse, or is strapped to their belt. To succeed in an increasingly competitive market, the wearable devices must be lightweight, low power, low cost, and easy to use. This combination presents many challenges to the designer when defining the system architecture and the selection of the wireless interface, the sensors, the displays, the embedded processors, and the power sources. This article has provided a look at some of the latest component solutions that will make their way into both near-term and future generations of wearable electronic systems.