Recent enhancements in low-frequency receiver design reduce power consumption while improving receiver performance, promising to widen the range of applications in which active RFID systems can be implemented


Recent enhancements in low-frequency receiver design reduce power consumption while improving receiver performance, promising to widen the range of applications in which active RFID systems can be implemented.

RFID (Radio Frequency Identification) is a popular technology in applications such as asset tracking and logistics support, and monitoring and access control, where they are sometimes also referred to as ‘Real-Time Location Systems.’ Up to now, most implementations of long range RFID have used an Ultra-High Frequency (UHF) reader operating in the 915 MHz frequency band combined with passive tags. Passive tags, which have no autonomous power source, generate their energy from the electromagnetic radiation emitted by the reader and communicate with the reader by changing their impedance (backscattering). As a result, passive tags have a limited range.

Some RFID systems, however, are required to operate in environments that are challenging to RF transmissions, such as in deep mines, inside metal shipping containers, and inside buildings with walls made of masonry. Achieving robust and reliable transmission with passive RFID systems is difficult when the radio signal must travel through obstructions such as rock, liquid, masonry, or metal.

For such applications, system developers must use an active RFID system, in which the tag includes its own battery power source. This enables the active transmission back to the reader of high-power UHF signals, which can consistently achieve a longer range than a passive tag can provide.

Figure 1: A system block diagram of an active tag.

A fundamental role in active RFID systems (Figure 1) is played by a low-frequency (LF) receiver which wakes up the system and triggers a UHF transmission. This article examines recent enhancements in LF receiver design that reduce power consumption while improving receiver performance, promising to widen the range of applications in which active RFID systems can be implemented.

The principal challenge for the designer of active RFID tags is achieving both very long battery life and long range — two requirements that at first sight seem to be in conflict with one another. At the same time, tags must fit a small form factor so achieving long battery life by use of a large battery is not a viable option.

These constraints explain why the system architecture shown in Figure 1 has evolved. The interrogator (base station) is made up of an LF transmitter and a UHF receiver, while the tag consists of an LF wake-up receiver and a UHF transmitter. The interrogator transmits periodically (typically once a second) an LF pattern. After the transmission, the UHF receiver is switched on to check for replies from tags. At the tag, only the wake-up receiver is active in normal operation; whenever the tag is within the interrogator’s range, the receiver wakes up the UHF transmitter (uplink) on detection of a pattern that it recognizes. Only then does the UHF transmitter transmit the information required to unambiguously identify the tag to the interrogator. This architecture allows the UHF radio to stay in power-down mode almost continuously.

In terms of power, then, the LF receiver is the most important element, since it is the only element that must always remain active. Sensitivity is another key parameter of the LF receiver, as the signals in the target applications might be attenuated by distance and physical obstructions.

For active tags, the requirement for battery life is three years (minimum) from a simple coin battery such as a CR2032. This constraint implies that the tag’s current consumption should be limited to little more than the battery leakage current while in receive mode. This in turn makes the choice of the operating frequency extremely important. To achieve the low power requirement, the receiver must operate at <300 kHz. RFID systems today typically use the 125 kHz or 134 kHz frequencies.

This, then generates the first challenge in the radio implementation: at such low frequencies the wavelength is large, requiring a correspondingly large antenna. Successful designs use loop antennas, which only sense magnetic fields (H). A loop antenna is essentially an inductor made up of coils of ferrite rods. As Figure 2 shows, the LF transmitter in the base station and the LF receiver in the tag together work like a transformer, where the inductor at the transmitter is the primary coil and the one at the receiver is the secondary coil. 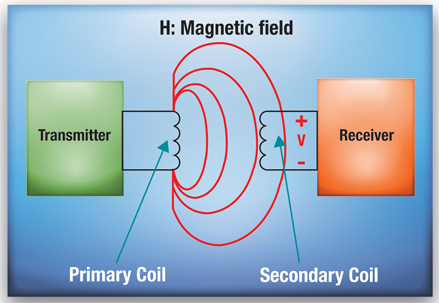 In order to increase both the magnetic field generated by the transmitter and the voltage picked up by the receiver, both coils are tuned with capacitors in order to resonate at the carrier frequency. This resonator can be damped using a parallel resistor to increase the bandwidth of the antenna.

Effective tuning is one measure that increases the sensitivity of the LF receiver, but the use of loop antennas poses another problem. Since the antennas sense a magnetic field, the orientation between the base station (transmitter) and the receiver has an important effect. Electromagnetic theory dictates that if the two coils show a 90 degree phase shift in space (Figure 3), the induced voltage on the secondary coil is in theory zero. 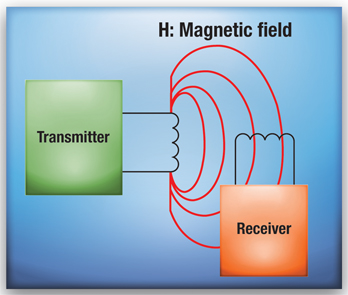 Figure 3: In magnetically-coupled systems, the induced voltage is zero when the Rx antenna is phase-shifted by 90 degrees.

In some precisely-controlled applications, the mutual orientation between the transmitter coil and the receiver will be fixed and predictable: here, effective communication is assured so long as this fixed position has the reader’s antenna and tag’s antenna parallel to one another during the reading phase. If the mutual orientation is not fixed and predictable, the receiver requires a three-dimensional antenna array comprised of three antennas orthogonal to each other (Figure 4).

The combination of carrier frequency tuning and three-dimensional antennas described here not only extends the receive range, it also allows the production of reliable Received Signal Strength Indicator (RSSI) measurements. RSSI information can be useful in some applications as it provides an estimate of the distance between the tag and the base station. 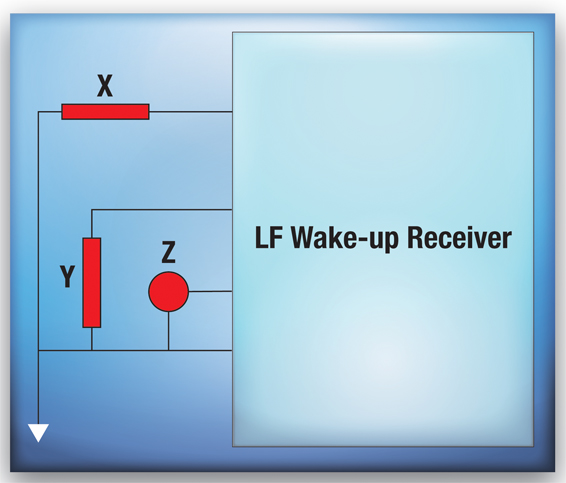 Figure 4: A three-dimensional orthogonal antenna array inside an active tag.

The architecture described above can reliably meet the required low average current draw, however, only on the assumption that the UHF transmitter is almost permanently in power-down. This means that the wake-up receiver must be able to reject false wake-up calls generated by noise or disturbance. Implementing a code or pattern generation capability in the interrogator and a pattern-recognition capability in the receiver solves this problem.

Typically active tags use single coin batteries of around 200 mAh capacity and the minimum expected lifetime is three years. This implies an average total current draw of approximately 7.6 μA. Assuming that on average half of the current is used by the UHF transmitter, the wake-up receiver can draw a maximum current of 3.8 μA.

The main constraint on the range of the system is the sensitivity of the wake-up receiver. A sophisticated LF wake-up receiver should offer sensitivity of at least 100 μV. Active tags offer very robust performance even in hostile environments: the low frequencies used can penetrate even extremely thick walls. The tag’s UHF transmissions typically cover the required range even at output power as low as 0 dBm.

The latest approach to implementing LF wake-up receivers is exemplified by a device recently introduced by austriamicrosystems, the AS3933 LF wake-up receiver. On the crucial parameters, the AS3933 offers typical current draw in three-channel listening mode of 1.7 μA and typical wake-up sensitivity of 80 μVrms, which is more than ten times better than its nearest competitor. The wakeup interrupt can be triggered by frequency detection only, but to guarantee false wake-up rejection the device includes an integrated correlator that detects programmable 16- or 32-bit Manchester wake-up patterns.

Frequency tuning is an important technique for improving sensitivity and effective range; the AS3933 implements an automatic tuning function using on-chip tuning capacitors. This reduces bill-of-materials cost, since external high-precision tuning capacitors are not required, and it also enables simplified antenna-checking on the production line. Furthermore, the on-chip antenna tuning capability provides a means for end users to check the connection status between the tag and reader.