A review of the basics of NFC technology which has started to make significant inroads into mobile communications.

There are many options for wireless communications, and each has a different data-throughput range and physical distance limit between nodes, as the graph in Figure 1 shows. Some of the wireless standards overlap in some aspects – some will have the same range or data throughput, so the end application will play a big role in determining which standard is the best fit for the system. 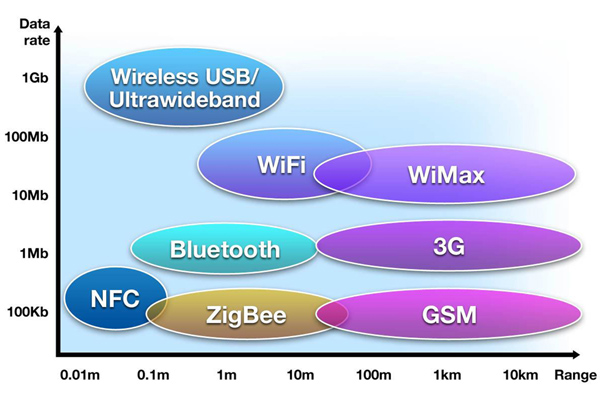 Figure 1: Many wireless standards are available for designers to use in their system. For very-short range communications, the NFC wireless standard can operate at distances of less than 20 cm, vs. other standards that function over much larger distances. (Image courtesy of the NFC Forum.)

NFC is a form of RFID, but it has its own set of standards that govern its interface and operation. Vendors that design products to meet the standards will be able to link their products to and interoperate with any other NFC-enabled products. The NFC standards determine not only the contactless operating environment, but also the data formats and data transfer rates.¹

However, before delving into the design of NFC systems, we will review some of the basics of NFC operation. The NFC standard defines a short-range wireless connectivity capability that can carry secure two-way interactions between electronic devices. A simple communications link between two NFC devices is easy to establish and does not require any setup by users. Once established the NFC link allows users to access digital content, perform contactless transactions, and even connect electronic devices by placing devices close to each other.

The NFC circuits employ inductive coupling using an RF signal at a frequency of 13.56 MHz. This frequency is a license-free allocation in the high-frequency portion of the radio spectrum. The inductive coupling provides the power to activate the RF circuitry and thus the communications link. Using amplitude shift keying (ASK) as the modulation format, with Manchester or a modified Miller coding scheme, the NFC link has most of the RF energy concentrated in the specified 14 kHz bandwidth; sidebands, however, may extend out as far as ± 1.8 MHz.

Over the established wireless link, the NFC circuits communicate using half-duplex operation –the same channel is used for both transmit and receive. Additionally, to prevent two devices from transmitting at the same time, the interface operates in a “listen before talk” mode. The devices may only transmit if they first listened to verify that no other devices are transmitting. Thanks to the short distance of the wireless link, the protocol overhead keeps to a minimum, improving the efficiency of the communications link. The data transfer rate includes three specific speeds – 106, 212, or 424 Kbits/s. The application itself will set up the initial communication speed, but the application running on the system can change the data rate based on system requirements and environmental conditions.

Part of the NFC standard defines two different modes of operation for the link: an active mode in which both devices in a link generate an RF signal that carries the data, and a passive mode in which only one NFC device generates an RF signal. The passive device employs a scheme called load modulation to transfer data back to the device generating the RF signal (the primary device, or initiator).

The two operating modes also include three communication modes that help define the applications for which the NFC-based device will be best suited. The communication modes include a Read/Write mode that allows applications to transfer data using an NFC Forum specified message format; a NFC card emulation mode that allows the card to behave like a Smartcard, employing a secure data-transfer mode; and third, a peer-to-peer mode that supports a device-to-device link-level communications capability (Figure 2).

Silicon suppliers have created various solutions for designers. Some vendors are offering complete multiprotocol analog front ends with on-chip encoders, decoders, data framing and protocol handling circuitry, some offering integrated microcontrollers, and others that just provide the RF front-ends so that designers can add their own microcontroller to handle the data transfer and protocols. Some of the vendors offering such products include Atmel, ams, Melexis, NXP Semiconductors, STMicroelectronics, and Texas Instruments. Dedicated RF Reader chips communicate with RFID transponders or contactless Smartcards using the industry standard ISO/IEC 14443-2 type B signal modulation scheme and the ISO/IEC 14443-3 type B frame format. 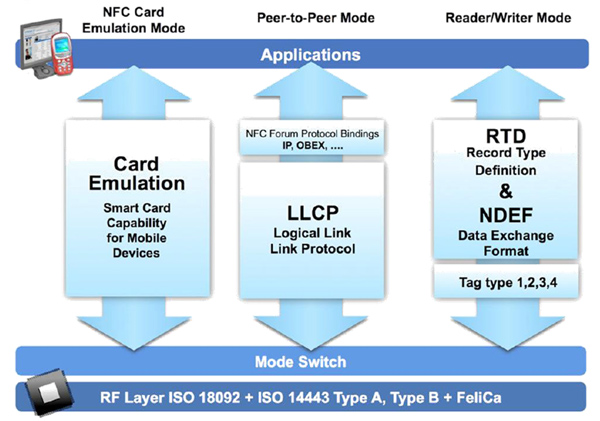 Figure 2: The NFC standard defines three operating modes for the interface: Card Emulation, Peer-to-Peer, and Reader/Writer Mode. In the Card Emulation mode, the NFC interface provides Smart Card payment features for mobile devices while the other two modes are better suited for applications that require data exchanges. (Image courtesy of the NFC Forum.)

A sampling of NFC solutions

A series of multi-standard-capable chips offered by Texas Instruments, the TRF7960, 61, 63A, and TRF7970, pack the full analog front end as well as all the protocol handling, encoding/decoding, and data framing circuits (Figure 3). The TRF7960, for example, can operate in any of the three interface modes – RFID/NFC Reader, NFC Peer, and Card Emulation – and user-configuration options let the chip handle a wide variety of applications (Figure 3). An integrated state-machine on the chips handles the ISO14443A anti-collision protocol and other interface control requirements. 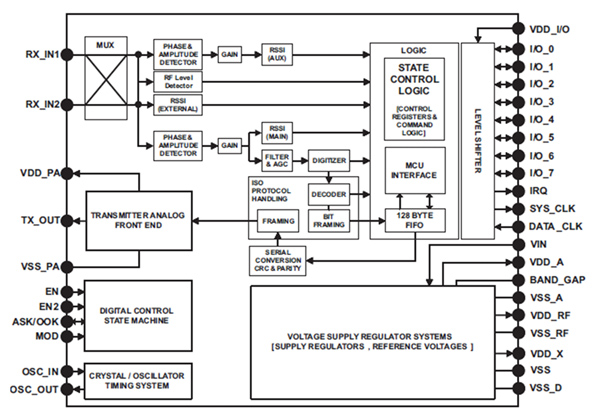 Figure 3: A fully integrated analog front-end transceiver for RFID and NFC applications the TRF7970A from Texas Instruments packs on-chip state machines to handle the protocol and all the encoding, decoding, and data framing. (Image courtesy of Texas Instruments.)

In a typical system, the TRF7960 is paired with a host microcontroller, such as the MSP430F23x0, which would execute the application firmware. The microcontroller’s memory capacity can be selected based on the application. Basic reference firmware offered by TI for ISO15693 (with host interface) requires about 8 Kbytes of storage and 512 bytes of RAM, while firmware that supports all protocols would require about 12 Kbytes of storage and about 1 Kbyte of RAM. Able to support four main operating modes – ISO/IEC 14443A Reader/Writer including MIFARE ), ISO/IEC 14443B Reader/Writer, FeliCa Reader/Writer, and ISO/IEC 18092 ECMA 340 peer-to-peer – the PN5331B3HN NFC controller from NXP Semiconductors combines an analog front-end and an embedded 80C51 microcontroller core to handle all the NFC protocol transactions. It also packs a master I²C port that drives serial peripherals such as an external EEPROM, or the company’s TDA8029 smart-card reader. A second-generation controller family, targeted at mobile phones and other portable systems, the PN544 series, supports all released NFC standards. The chip includes multiple host-controlled power states that can drop the current down to just 3 µA in standby or supply up to 60 mA in the RF active mode.

Yet another NFC solution, the PN532 from NXP, focuses on applications such as point-of-sale (POS) terminals and other portable systems (Figure 4). It can serve as single-chip Reader/Writer interface to a host microcontroller, as a Reader/Card Emulator with the addition of a MiFARE SmartMX secure interface, or in a POS terminal with the addition of an RF booster amplifier (two transistors and some passive components) and an optional Smartcard controller.

Figure 4: Able to operate in several different system configurations, the PN532 from NXP Semiconductors requires just a host microcontroller to perform as a Reader/Writer (left), or as a Reader/Card Emulator by adding a Secure Element, the P5CN072 (center), or an RF booster circuit and optional smart-card controller to form a POS terminal (right). (Images courtesy of NXP.)

The highly integrated solutions by the various chip vendors help to broaden the application potential by lowering the system cost, reducing power consumption, and simplifying the system design. Additionally, the NFC standard is still evolving, opening NFC to still more potential applications such as product authentication, secure access control, medical systems, and many other uses.