Ambient light sensor (ALS) products are quickly becoming one of the most effective solutions for power management and display quality enhancement in electronic products and systems.


Ambient light sensor (ALS) products are quickly becoming one of the most effective solutions for power management and display quality enhancement in electronic products and systems. Battery life for mobile phones, notebook computers, PDAs, and digital cameras can be extended significantly by using automatic brightness control through ambient light sensor (ALS) feedback. A recent study, for example, shows that the display backlight represents one-third of the total battery drain in a notebook computer. It has also become possible to achieve a more comfortable display quality with a light-sensing approach mimicking that of the human eye. Automotive applications, room lighting, and advanced color sensing are among other application areas for ALS that have been enhancing our daily lives, mostly without our realizing it.

This article will examine the analog output ALS devices available and the many possible ways to interface these products to achieve a good path to the microcontroller-based digital domain for full system performance and functionality.

Avago addresses low cost design ALS design alternatives with its APDS-9002. An example interface (Figure 1) for this ALS uses low cost, passive RC components that convert the current output of the APDS-9002 to a voltage (VOUT) and a low-cost/low-power analog-to-digital converter (ADC) or a microcontroller (µC) with on-board ADC to sample the VOUT. The VOUT is directly proportional to the ambient light source intensity shining on the photo sensor in the ALS. The analog current output from the ALS is converted to VOUT as it travels through the load resistor RL to ground. The capacitor C is optional for fluorescent light sources that are composed of AC ripple/noise mostly around 100 to 120-Hz frequency. The RL in parallel with the C acts as a low-pass filter to bypass that ripple/noise. 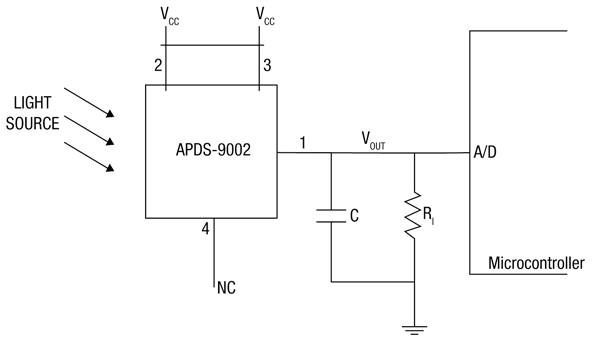 Brightness is measured in units of lux, which describes the intensity of the ambient light source as perceived by our eyes. There is a direct relationship between exposure value (EV) and luminance (Since luminance is sometimes synonymous with EV, this exact relationship will not be discussed in this article, but a discussion can be found in the literature¹). Figure 2 provides a representation of VOUT with different values of RL as luminance varies. 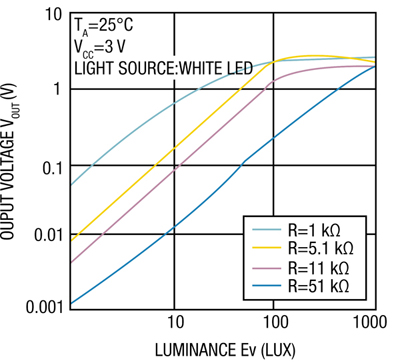 There are many varieties of optical sensors available in small packages at low cost. Passive solutions in the above circuit have been used for decades in night lights and still digital cameras.

Active solutions have increased the range and usefulness of ALS. Most typical active solutions integrate a phototransistor or photodiode with a transimpedance amplifier.² Figure 3 represents a circuit that can be used for low-speed or high-speed applications with tremendous versatility as to custom design of circuit performance in a demanding system where photodiode current source and load impedance are buffered and bandwidth can be set as desired when choosing the right op amp. 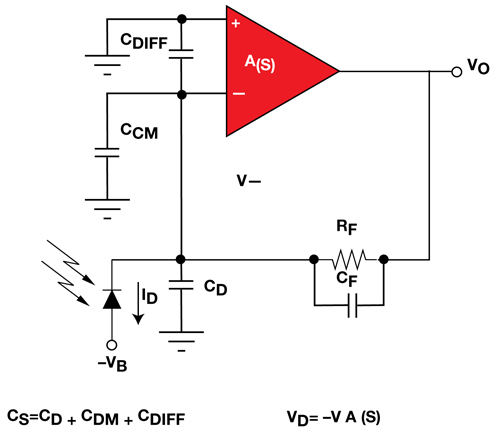 When greater resolution, low light capability, power supply rejection, or possibly a disabling function is needed in an integrated solution, the Intersil family of ISL29xxx family extends the usefulness of typical ALS. (See Intersil’s tutorial on ALS on Hotenda’s website.) In particular, let’s look at the ISL29102.

The ISL29102 is a low-cost light-to-voltage silicon optical sensor that combines a photodiode array, a nonlinear current amplifier, and a micropower op amp in a single monolithic circuit. Similar to human eye response, the photodiode array has peak sensitivity at 550 nm and only spans from 400 to 600 nm, thereby rejecting ultraviolet (UV) light and infrared (IR) light.

The nonlinear current amplifier boosts and converts the photodiode signal following a square root function. This extends the light output dynamic range while maintaining excellent sensitivity at low lux levels. The data sheet provides details of VOUT relationship to ambient light intensity level. Since the photodiode has a responsivity that resembles the human eye, the light source conversion rate is independent of the light source; whether it is fluorescent, incandescent, or direct sunlight. The external set resistor REXT sets the light-to-voltage scaling constant.

Again, as in the previous example, an ADC can digitize the VOUT of these devices and the result can be passed on to a µC.