With the focus shifting to 32-bit architectures, it can be easy to forget that 8- and 16-bit MCUs are still vital parts of the design engineer’s toolbox.


In the world of microcontrollers, the focus has shifted to 32-bit architectures, particularly with a long list of vendors migrating to ARM-based architectures. It can be easy to forget that 8- and 16-bit microcontrollers (MCUs) are still vital parts of the design engineer’s toolbox. The MCU community has a long legacy of 8- and 16-bit families, and products in those categories were prominent at the Embedded World 2011 conference held recently in Nuremburg, Germany.

Infineon, for example, featured new 16-bit products at the Embedded World Show. The company is integrating DSP capability in the MCUs and uses the term “real-time signal controllers” to describe the ICs. This concept can be compared to a Digital Signal Controller (DSC), although DSC capability is more commonly found in 32-bit processors.

The newest Infineon MCUs are part of the established XE166 family and include the XE 16xL and XE 16xU. Infineon targets motor-control or what it identifies as electric-drive applications. The company says the new ICs deliver 16-bit performance at an 8-bit price point.

The new ICs integrate a 12-bit A/D converter with as many as 19 channels and offer a conversion time of less than 1 µs. The architecture includes a 32-bit multiply-accumulate (MAC) unit for DSP operations.

While Infineon classifies the new ICs as members of its low-end and ultra-low-end XL166 family, the MCUs can deliver 80 MIPS. Moreover, they integrate a capture-and-compare unit and PWM controllers that allow the MCUs to drive almost any three-phase motor. 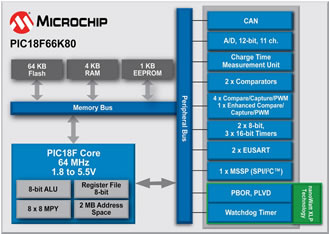 8-bit CAN MCUs for industrial applications
Microchip also announced new products at Embedded World, featuring a new 8-bit MCU family. The PIC18F family that the company has designated “K80” integrates CAN support and is optimized for ultra-low-power applications in the automotive, industrial and medical segments .

The new Microchip K80 family brings CAN support to the company’s XLP MCU family that is designed to operate for years from battery power.

The K80 MCUs provide flexibility to operate from a broad range of input voltages, as well as low power consumption while active and asleep. Input voltage can range from 1.8 to 5.5 V. The MCUs consume less than 20 nA in sleep mode, which Microchip says is an industry best. The MCUs are part of Microchip’s XLP (eXtreme Low Power) product offering, which is designed to operate for years on battery power.

While the MCUs are power-miserly, they enable a broad feature set based on the integrated peripherals. The processor core only offers 16-MIPS performance, but a 12-bit A/D converter and Microchip’s mTouch sensing peripheral enables touch-sensitive user interfaces in products based on the new MCUs. The new products bring CAN capabilities to the XLP family, enabling use in automotive and industrial applications. Microchip has identified automotive, lighting control and HVAC systems as ideal markets, along with industrial applications in security and medical devices such as glucose meters. 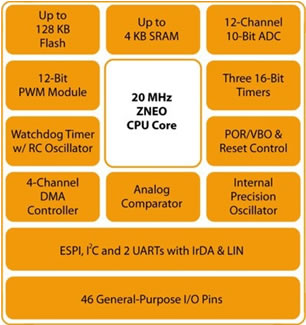 16-bit SOC for motor control
In January, Zilog launched a SOC (system -on-chip) for motor-control applications. The new Z16FMC is a 16-bit MCU based on the company’s ZNEO processor core.

Like many modern CISC processors, the Zilog design delivers single-cycle instruction execution that was once the sole province of RISC architectures. In addition, the processor can perform 32-bit math operations.

For motor control, the Z16FMC integrates a PWM module with three complementary paired outputs or six individual outputs. Combined with a 10-bit A/D converter, the PWM capability offers a variety of multiphase motor-control capabilities. The converter can sense current or back EMF, and the MCU includes a Hall-effect sensor interface.

Hotenda offers a broad range of development platforms, as well as evaluation and demonstration boards for a variety of applications. For example, motor-control-centric offerings are stocked for MCUs from Zilog, Microchip, Texas Instruments and many other vendors. There is a broad selection of CAN-focused tools that can assist in developing applications for industrial and automotive applications.