Discuss Li-ion battery charging and other techniques can be used to maximize energy delivery and storage while minimizing battery size and weight.

The charging system for a portable device is not always given a high priority in design but it can have a major role in the battery life of the system and, properly optimized, can allow the use of a smaller battery pack than otherwise would be needed. Not only are compact battery-management controllers needed, but intelligence also needs to be deployed tactically to allow the power system to be correctly optimized. This article will look at the needs of the Li-ion chemistry in terms of charging and what techniques can be used to maximize energy delivery and storage and summarize key solutions available for that purpose.

The lithium-ion (Li-ion) battery chemistry has greatly improved the power density of portable devices compared to older technologies such as nickel cadmium and, with it, the uptime of those systems on a single charge. Li-ion has half the self-discharge rate of nickel cadmium and nickel metal-hydride chemistries, which also helps shelf lifetime, allowing devices to be shipped charged so that customers do not have to plug their purchases in before using them.

The downside of Li-ion compared to earlier chemistries is that charging is more complex than with older technologies. However, careful management can be employed to maximize the power delivery of li-ion not only to provide users with a better experience, but also allow designs to be downscaled to use smaller batteries. As the battery is a significant proportion of the size and weight of wearables, any saving made here that can be made through the substitution of one charging circuit for another can be dramatic.

The key issue with Li-ion batteries is that they are highly sensitive to overcharging, since too high of a voltage will introduce material stress that shortens the life of the battery. They also present a risk to safety if charged beyond a voltage of 4.2 V per cell.

Lower-cost charging circuits avoid overcharging problems by not topping the battery up to its realistic limit. They employ a so-called “charge and run” strategy, which has the benefit of appearing to be fast. This strategy takes advantage of the characteristics of the Li-ion charging profile, which can be separated into four key stages. The first stage uses a constant-current supply to the battery. As the battery charges, its voltage increases more or less linearly. The voltage flattens out near the peak, at which point the charger can stop. However, it will only be approximately eighty-five percent charged at this point, leading to a lower usage time than is theoretically possible.

Furthermore, for safety reasons, the cutoff voltage is often set significantly lower than the maximum voltage, which further reduces the maximum charge that is applied to the battery. A cutoff of 3.8 V rather than the typical maximum of 4.2 V results in only sixty percent of battery capacity being available. The remainder of the charging is performed during the saturation or constant-voltage phase. Although fast chargers can reduce the time it takes to get to the saturation phase by increasing the charging current, this has the effect of lengthening the saturation phase, which needs to be carefully and precisely managed to avoid overstress. 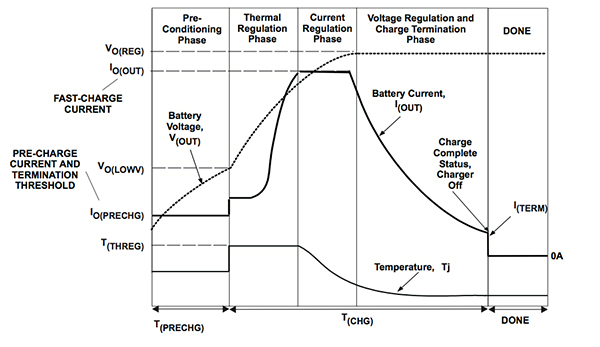 It is difficult to detect when a cell is fully charged, so either time or current levels are used as proxies to indicate how close to full the battery has become. In general, saturation charging will take around two hours, providing a reasonable set time. During saturation charging, the current drops exponentially. When this current reaches about three percent of the level used during the first stage, the battery is generally considered fully charged and the process can stop. The voltage used during saturation charging needs to be regulated to within one percent or better. Circuits that perform saturation charging may use both current-sensing and timers to manage the process to ensure that if a sensor fails, the power will be cut-off after a time and prevent metallic lithium build-up that can cause a fire.

Temperature also plays a part in controlling charging. During the first stage, the internal resistance is comparatively low and the battery does not heat up significantly. Once into the saturation stage, the battery can become much warmer. So, temperature sensors can be important to ensure that the battery does not overheat and present a risk to safety. Cell manufacturers will specify safe temperature limits for their products and often provide thermistors within the battery packs that can be used with an ADC or comparator circuit within the charger circuit.

For deeply depleted batteries, there is a charging process that needs to precede stage one. This uses a trickle charge to restore charge to the depleted cells – detected because their voltage will be below 3 V. Once enough charge has been supplied through the trickle process, the voltage will rise to above 3 V and the normal first-stage charging process can take over.

Packaged in a small-footprint DFN package, the LTC4065 charger IC from Linear Technology provides an example of how feedback loops can be organized to support the variety of charging modes needed for Li-ion cells. The device supports constant-current and constant-voltage charging regimes, as well as one for constant temperature to allow effective charging close to the thermal limit of the battery. To support high-temperature charging, the LTC4065 features a thermal limit circuit. This allows the charge current to be set according to typical, not worst-case, ambient temperatures for a given application with the assurance that the charger will automatically reduce the current in worst-case conditions.

In the LTC4065, three amplifier feedback loops control the constant-current, constant-voltage, and constant-temperature modes. A fourth amplifier feedback loop is used to increase the output impedance of a current-source pair to ensure that the drain current of one is exactly one-thousand times greater than the drain current of the second. The separate feedback loops for constant-current and constant-voltage operation force the charger into either of these modes based on whichever is trying to reduce the charge current the most. The output of the other amplifier saturates low, which effectively removes its loop from the system. When in constant-current mode, it drives the voltage output by the charge-current programming (PROG) pin to be precisely 1 V. The PROG pin programs the current through the use of a one percent tolerance resistor (Rprog). The constant-voltage loop drives its inverting input to an internal reference voltage when the constant-voltage mode is favored. An internal resistor divider ensures that the battery voltage is maintained at 4.2 V. The PROG pin voltage also gives an indication of the charge current during constant-voltage mode.

In typical operation, the charge cycle begins in constant-current mode – the current delivered to the battery equals 1000 V/Rprog. If the power dissipation of the LTC4065 results in the junction temperature approaching 115°C, the temperature-limiting amplifier will begin decreasing the charge current to limit the die temperature to approximately 115°C. Once out of the temperature-limit mode, the LTC4065 either returns to constant-current mode or enters constant-voltage mode from constant-temperature mode. Regardless of mode, the voltage at the PROG pin is proportional to the current delivered to the battery.

Internal timer circuitry and trickle charge management complete the features needed for effective Li-ion battery management. The device provides a float voltage accuracy of ±0.6 percent and only requires two external components. When the input supply is removed, the LTC4065 automatically enters a low-current state, dropping battery drain current to less than 1 µA. With power applied, the LTC4065 can be put into shutdown mode, reducing the supply current to less than 20 µA. 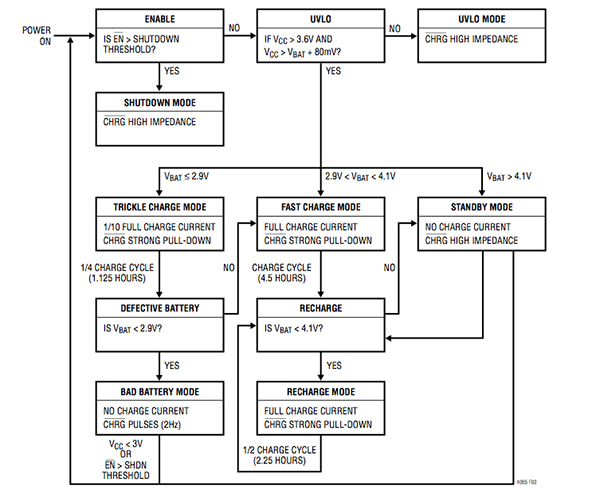 Figure 2: Flowchart of charging states and decisions undertaken by the LTC4065.

Similar to the LTC4065, Maxim Integrated’s MAX1551 also sports on-chip thermal limiting to allow optimum charging without the thermal limits imposed by worst-case battery and input voltage. When the thermal limits are reached, the MAX1551 and MAX1555 do not stop charging completely but, instead, progressively reduce charging current, helping to maintain function while the system cools down.

Packaged in a SOT23, similar to the MAX1551 and MAX1555, the MCP73811 developed by Microchip Technology provides constant-voltage and constant-current charging, with the latter programmed by just an external resistor, together with a built-in thermal sensor to control temperature-limited charging.

The bq2409x series of devices from Texas Instruments are highly integrated linear charger devices targeted at space-limited portable applications. Designed for use with a USB port supply or AC adapters that may be unregulated, the ICs sport a high input voltage range with input overvoltage protection. The bq2904x performs conditioning, constant-current and constant-voltage charging. In all charge phases, an internal control loop monitors the IC junction temperature and reduces the charge current if an internal temperature threshold is exceeded.

Although Li-ion batteries call for a combination of charging techniques to make the most of their higher capacity, direct IC support makes it easier to build portable and wearable systems that can ensure a full charge delivers the maximum uptime and, with it, allow for the battery size to be reduced to the optimum tradeoff between weight and lifetime.