EDLCs were first created in Japan in the 1970s and began appearing in various home appliances in the 1990s. Since the 2000s, they have been used in mobile phones and digital cameras. EDLCs are typically used to protect against sudden momentary drops or interruptions in power. They can instantaneously output large amounts of power, while a battery cannot. They are frequently used as backup power sources in servers and storage devices for integrated circuits, processors, memory and more.

While EDLCs are intended to be backup power sources, conventional EDLCs suffer from a phenomenon known as self-discharge, where the capacitor will gradually lose its charge over time. Self-discharge can occur more rapidly during exposure to high temperature environments.

The extremely low self-discharge of a Lithium Ion Capacitor, even in high-heat environments, ensures a long-lasting charge.

The use of Lithium Ion Capacitors is steadily growing. They are increasingly relied on as supplementary power sources in manufacturing and medical equipment, where even momentary drops in voltage can be critical. They serve to compensate for uneven voltage levels with solar panels and even as primary power sources in small devices. Most significantly, Lithium Ion Capacitors are becoming a preferred backup solution for power interruption in servers and other devices.

Principles and features of Lithium Ion Capacitors as compared to EDLCs

Lithium Ion Capacitors are hybrid capacitors that use a carbon-based material as the negative electrode that can be doped with lithium. Just as in a conventional EDLC, they use activated carbon for the positive electrode. 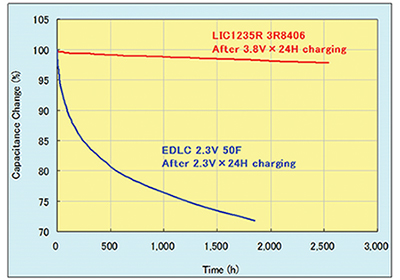 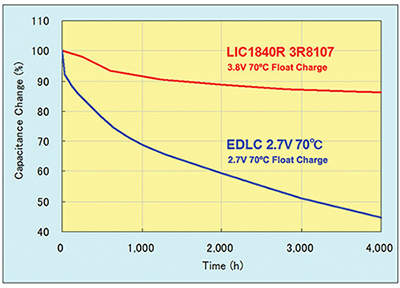 Moreover, charged at 3.5 V, the float charge characteristics (consecutive-charge) of a cylinder-type Lithium Ion Capacitor under a high temperature of 85ºC shows good results with about 80% of the initial voltage maintained even 5,000 hours later. 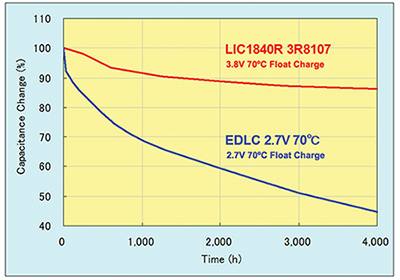 Thanks to its high energy density, multiple EDLCs can be replaced with one Lithium Ion Capacitor. In applications such as servers and integrated circuits that use dozens of EDLCs, this can result in significant space savings, allowing for an overall reduction in space or more space between each component. Utilizing fewer capacitors also helps improve thermal design by reducing the number of heat-generating components.

Using a carbon-based material doped by Lithium Ions at the negative electrode may create concerns about the safety, similar to Lithium Ion Batteries (LIB). However, the material composition of their positive electrodes is very different: LIB uses metal oxide and a Lithium Ion Capacitor uses carbon-based materials such as activated carbon, which does not contain oxygen. This differentiates their reactions when an internal short-circuit occurs.

In contrast, the internal pressure of the cell also rises in Lithium Ion Capacitors, but after that, thanks to the difference of the materials in the positive electrodes, the thermal runaway phenomenon will not occur and the reaction quietly finishes with the opening of the safety valves.

Figure 7: Results of a nail penetration to a 200 cylindrical farad Lithium Ion Capacitor.

These results show that the Lithium Ion Capacitor is a safe device. Even if the temperature of an external wall of the cell increases to 100ºC after short-circuiting, the temperature gradually decreases and the cell does not cause serious problems such as major deformations or explosions. With these results, the Lithium Ion Capacitor is equivalent to the symmetrical-type EDLC in safety. Also, it has a number of features such as that it does not cause thermal runaway even with rising internal cell temperatures, unlike LIBs, and it does not contain any metal oxides as a material of the positive electrode. In addition, if an internal short-circuit should occur, internal short-circuits from an elution in base materials of the negative electrode are unlikely as the potential of the negative electrode does not exceed the elution potential of Cu.