Linking Smart Meters to the Grid with Wireless Technology

There are many different approaches for linking intelligent energy meters to create 'smart' grid, and wireless technology is a key design option.


There are many different approaches for linking intelligent energy meters to create ‘smart’ grid, and wireless technology is a key design option. Using a wireless link can simplify the installation and collation of data from smart meter back to a hub either in the home or in the street, but such links need to be cost effective and also secure. This has a significant impact on a choice of the many different frequencies, protocols and topologies available for providing the smart meter link.

In January, two German researchers managed to hack into an unencrypted smart meter link and re-set the energy consumption and tap into the entire power consumption history. By correlating this with publicly available TV schedules, they could determine which movies were being viewed. This demonstrates that the wireless link has to be sufficient to carry encrypted data and that the node has to have sufficient processing power. However, the advantage is that this does not necessarily have to be done in real time and there are relatively small amounts of data being sent. However, this does also impact the power consumption of the node and the battery life. The cost of changing batteries for millions of smart meters is a significant operating (opex) cost that infrastructure companies are keen to reduce, so minimizing the power consumption is a key design goal.

Reducing the power of the wireless transceiver also allows the designer to consider energy harvesting as an option. Using electromagnetic or thermal energy from the environment to power the node is becoming possible. This can allow batteries to be used as storage and backup, extending the replacement cycle indefinitely. This is particularly attractive for smart grid applications that sit near mains power and can tap this energy.

One way to achieve this power reduction is to use a mesh network approach. This allows each wireless node to relay data to its nearest neighbor, potentially extending the range of the network dramatically. With a point-to-point connection, the range is limited by the power output from the node to the base station or gateway and more power is needed to get a longer range, reducing the battery life and incurring further costs.

Instead, with a mesh network, each node, in this case a smart meter, can pass data onto its neighbor, with data packets hopping though many nodes until it reaches the core, or PAN (Figure 1), allowing a much broader network. 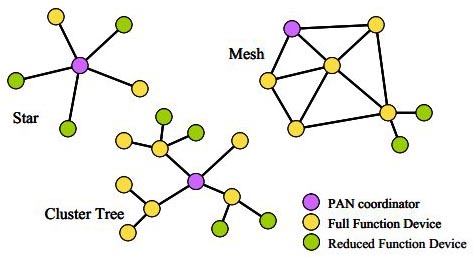 This does not work well with networks carrying large amounts of data or streams such as video, as each node has to handle all the data from every other node and quickly gets to the limit of the bandwidth. However, for linking smart meters to the grid, with infrequent small packets of data, it means that a low bandwidth network with low power output can effectively support a large number of nodes, making it ideal for applications such as smart grid.

As data is potentially passing through many different nodes, security is vitally important to prevent the packets from being intercepted, analyzed and used to hack into the network. There are different mesh network protocols available at different frequencies, depending on the cost points and bandwidth requirements. Zigbee is commonly used with a mesh and star protocol, running in the 2.4 GHz band, but this can suffer from interference from microwave ovens and Wi-Fi networks, and has less range than lower frequencies (Figure 1).

Synapse Wireless’ RF Engines operate in the ISM bands at 868 MHz and 2.4 GHz, depending on the different applications. The lower frequencies reach further, allowing a central data collection unit to connect to a number of houses in a street, perhaps via a wide area GSM modem that has additional security and authentication from the SIM modules.

2.4 GHz systems can be used with a local gateway in the home that connects to the Internet via a broadband modem. This has to be a secure connection, so the gateway must also be supplied by the infrastructure company at extra cost.

The Synapse SM301 is a long-range, surface mount 868 MHz transmitter receiver module. These small, low-powered modules can have a range of up to 1 mile and power consumption as low as 2 µA. The SM301 RF Engines come pre-loaded with the Synapse SNAP mesh network operating system, provide interoperability with all other SNAP RF Engines, and has a chip antenna with the SM301PU1 having a U.FL antenna connector.

With fifteen GPIO and up to eighteen analog to digital inputs, the SM301 can be used to gather data from the system while the one UART port can be used for control or transparent data. In a low power mode, it uses just 2 µA with the internal timer running, extending battery lifetime. The SNAP core uses a total of 192 K of flash memory with 64 K free for uploadable SNAPpy scripts, and 20 K for over-the air updates, with 64 K reserved.

Using spread spectrum (DSSS) technology avoids problems in noisy electromagnetic environments, and an optional 18 dBm transmit amplifier can be used to boost the range alongside the 10 dBm receiver amplifier. There are multiple antenna choices for the module, from the RF100PD6 with an SMA connector (reverse-polarity) for an external antenna to the RF100PC6 with an embedded “F” antenna that can extend the range to 3 miles.

The ADF7023 from Analog Devices (Figure 2) is an ultra-low power, high performance transceiver aimed at smart metering applications. It covers the frequency bands from 902 MHz to 958 MHz with data rates from 1 kbps to 300 kbps from a 2.2 V to 3.6 V power supply. Single-ended and differential power amplifiers (PAs) give a variety of design options depending on the range required and the environment the meter is installed in. The single ended PA provides an RF output power of −20 dBm to +13.5 dBm, while the differential PA gives an RF output power of −20 dBm to +10 dBm.

The low power consumption assists with battery life, with just 0.33 μA current consumption in Deep Sleep Mode. The transceiver uses a patented fast settling automatic frequency control (AFC) to reach the set frequency quickly, keeping the power consumption down by operating for the minimum possible time. It also has a current-saving, low power mode with autonomous receiver wake up, carrier sense, and packet reception to ensure minimum power is used.

To handle security, the Analog Devices chip includes its own 128-bit AES encryption/decryption engine with hardware acceleration and key sizes of 128 bits, 192 bits, and 256 bits.

At even lower frequencies and for longer range, there is the AS3900 from austriamicrosystems. This is a low power FSK transceiver ideal for battery operated short-range device (SRD) applications in which a limited amount of data (up to 210 kbit/s) needs to be transferred.

The device can be configured as a transceiver, transmitter only, or receiver only system, operating in one worldwide ISM band channel at 27 MHz. The frequency of the external oscillator determines the operating frequency and the output power is adjustable to 0, +5, +10 dBm. 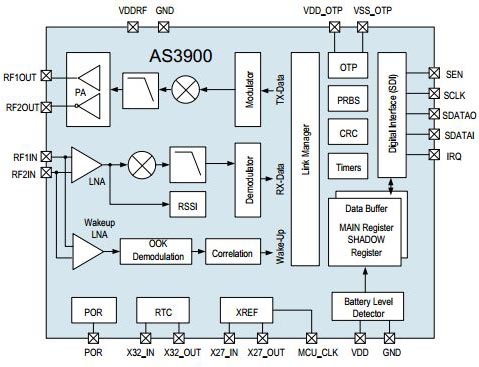 Figure 3: The AS3900 star mesh transceiver from austriamicrosystems.


The AS3900 device incorporates a serial digital interface (SDI) which enables bidirectional communication with external system components. An integrated real-time clock, sophisticated wake-up functionality, and link manager all enable current-efficient control of all communication events and eliminate the need for an expensive microcontroller.

For a network inside the home, the Synapse RF Engine RF100 is a complete system for implementing an 802.15.4 Zigbee node. This can be part of a smart meter used to link up equipment in the home to give more data on energy usage. 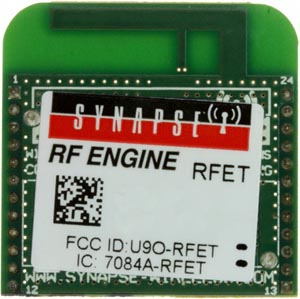 The RF100 module provides up to sixteen channels of operation in the ISM 2.4 GHz frequency band and contains both a power amplifier for transmission and a low noise amplifier in the receive path for extended range. Synapse has also made the development process easier by integrating a Python programming language interpreter on the module. This provides a rapid application development environment and also supports over-the-air programming so that units can be upgraded wirelessly in the field. This can provide a considerable cost savings and allow additional features to be added later in the product lifecycle to further support developments in the wider smart grid.

For other Zigbee applications, the Ember EM260 provides a highly integrated, 16-bit XAP2b processor, a Zigbee stack, and an integrated 2.4 GHz, IEEE 802.15.4-compliant transceiver. EmberZNet, the Ember ZigBee-compliant network stack, provides an API across a standard SPI module, allowing application development on a Host processor. This means that the EM260 can be viewed as a ZigBee peripheral connected over SPI. 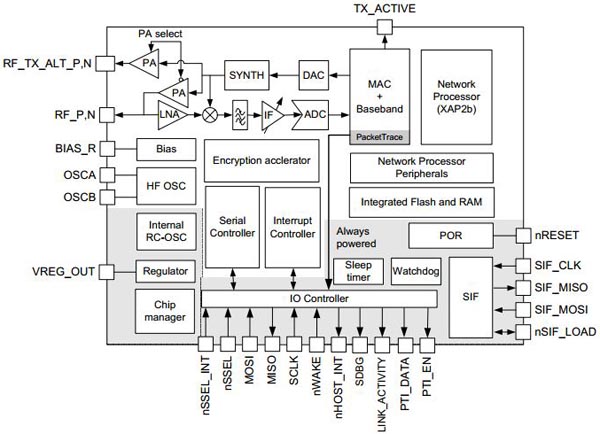 
The Ember transceiver uses a highly efficient architecture that exceeds the dynamic range requirements imposed by the IEEE 802.15.4-2003 standard by over 15 dB. The integrated receive-channel filtering allows for co-existence with other communication standards in the 2.4 GHz spectrum such as IEEE 802.11g and Bluetooth. The integrated regulator, VCO, loop filter, and power amplifier keep the external component count low. An optional high-performance radio mode is software selectable to boost dynamic range by a further 3 dB to give additional range if necessary. As this is software selectable, this can be done when the node is installed, allowing the minimum power to be used unless absolutely necessary.

To maintain the strict timing requirements imposed by ZigBee and the IEEE 802.15.4-2003 standard, the EM260 integrates a number of MAC functions into the hardware. The MAC hardware handles automatic ACK transmission and reception, automatic back-off delay, and clear channel assessment for transmission, as well as automatic filtering of received packets. In addition, the EM260 allows for true MAC level debugging by integrating the Packet Trace Interface.

Mesh networks can provide significant advantages for the design and implementation of wireless nodes for smart meters. Reducing the power consumption to extend the battery replacement cycle as long as possible, or even eliminating it entirely by using energy harvesting, can provide cost benefits as operators roll out smart grid systems. The choice of frequency depends on the range requirements, but many transceivers provide significant flexibility to support a wide range of bands within a single design without needing extra external components.