Solutions from suppliers, including Philips Lumileds, that overcome the downsides of green LEDs and turn RGB LED lighting into a practical proposition.


There are two established ways of generating white light using LEDs: mixing the emissions from red, green, and blue (RGB) chips (see the TechZone article “Creating White Light by Adding - Not Subtracting – Color”), or combining a blue device with a yellow phosphor (see the TechZone article “Whiter, Brighter LEDs”). Both methods work well, but the latter is more popular because the system exhibits much higher efficacy.

However, combining RGB LEDs has an advantage in that it allows manufacturers to introduce color-tunable solid-state lighting, which in turn enables consumers to quickly and easily change the ambience of a room. The lighting in a bedroom, for example, could morph from a yellowish-white to a pinkish hue to encourage sleep.

However, despite the color-tunable nature of RGB LED lighting, it is likely to remain a novelty until the efficacy of green LEDs improves to match that of blue and red devices because consumers are unlikely to compromise their power bills just for the sake of fancy lighting. Fortunately, change is afoot. Manufacturers, notably Philips Lumileds, are introducing novel solutions that overcome the downsides of green LEDs and turn RGB LED lighting into a practical proposition.

While RGB LED-based products are likely to gain some market share due to the “fun factor” of color tunability, in their present form they are not going to challenge blue LED/yellow phosphor white LEDs for mainstream lighting applications because their efficacy is lower.

Efficacy (lm/W) is something of a Holy Grail for LED makers because it is a major differentiator between solid-state lighting and traditional lighting (see the TechZone article “What's Next for High-Power LEDs?”). LEDs are now so optimized they are beginning to challenge even fluorescent tubes (which exhibit an efficacy of 50 to 100 lm/W). Cree has recently introduced a white LED from its Xlamp XM-L family, which produces 123 lm/W (at a forward voltage of 2.9 V and forward current of 700 mA).

The main drag on RGB LED efficacy is the green device. A green LED’s external quantum efficiency (EQE) is about 25 percent, compared with blue and red devices that boast peak power-conversion efficiencies beyond 81 percent and 70 percent, respectively. OSRAM manufactures a 640 nm red LED, from its OSLON SSL series, that has an efficacy of 487 mW/W (2.55 v, 350 mA.) For technical reasons, the efficiencies of blue and red LEDs are characterized using radiometric measurements in mW/W rather than the common efficacy measurement of lm/W used for green and white LEDs (see the TechZone article “Royal Blue LEDs: Decoding the Datasheet”). Similarly, Cree’s 458 nm royal blue LED from its Xlamp XT-E range produces 489 mW/W (2.85 V, 350 mA).

The reason why green LEDs struggle to reach the efficiency of other types of LEDs is complex, but for chips based on aluminum gallium indium phosphide (AlInGaP) semiconductors, the problem boils down to the fact that altering the composition of the semiconductor so that it emits in the green part of the spectrum leads to insufficient carrier confinement, due to the relatively low band gap of the material system. In other words, electrons leak away rather than radiatively recombining with holes to release a photon.

Two different challenges face chips based on the aluminum gallium nitride (AlGaN) system. First, green AlGaN LEDs feature extremely-high internal piezoelectric fields. So, for a given current, the voltage that has to be applied is higher than for other colors, despite the lower bandgap. High drive voltage drags down power-conversion efficiency. Secondly, green LEDs are plagued by efficiency droop, the steady decline in internal quantum efficiency with increasing current densities. Droop occurs in all LEDs, but its impact is far greater in green devices, leading to low efficiencies at common operating currents (see the TechZone article “Identifying the Causes of LED Efficiency Droop”). Figure 1 shows the “green gap,” the part of the visible spectrum where the efficiency of LEDs tails off.¹

The color of blue emitter/yellow phosphor white LEDs is fixed (although it can vary over longer periods as the LED and phosphor age). In contrast, by implementing some control electronics into an RGB LED’s driver, users can subtly alter the respective intensities of the three LEDs to alter the color output and change the ambience of a room.

As a result of this compelling advantage, LEDs makers are keen to make RGB LEDs more practical for lighting, thus encouraging consumers to buy them in greater numbers, by addressing the problem of inefficient green chips. There are already some devices on the market that show a marked improvement over the products of yesterday. Cree’s 528 nm green chip from its XLamp XP-E family produces a healthy 84 lm/W (3.4 V, 350 mA.)

However, in the absence of highly efficient green LEDs, Philips Lighting has taken a different approach with its Hue color-tunable bulb. Instead of a conventional green device, Philips Lighting has based the green element of Hue’s RGB light engine on a lime-green LED from Philips Lumileds’ Rebel ES family (Figure 2).

The lime-green device is not a pure-color LED, rather a combination of blue emitter and proprietary lime phosphor that overcome the efficiency problems of green devices. According to the Philips Lumileds’ datasheet, this blue LED/green phosphor combination is capable of an efficacy of up to 190 lm/W (2.75 V, 350 mA). 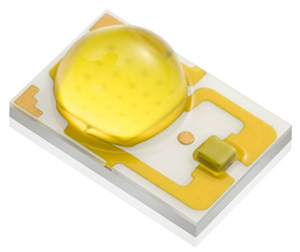 RGB LEDs have another advantage over white LEDs in that they boast a better Color-Rendering Index (CRI). CRI is a measure of how well a light source reproduces the color of an object compared with sunlight (see the TechZone article “What Is the Color Rendering Index and Why Is It Important?”). The company claims that the use of the lime-green LED maximizes this advantage by enabling solid-state lighting products with CRI values above 90.

Based on an RGB LED using the lime-green chip, the Hue bulb screws into a standard light socket. Wireless connectivity allows a smartphone- or tablet computer-based app to alter the bulb's output (Figure 3). The app matches the LED output colors to a rainbow palette in the app, or even to the user's favorite images.

The Hue bulb starter set does not come cheap. The bulb itself retails at around $60, more than triple the price of a Philips Ambient bulb that emits a pleasant white light. Consequently, Philips is presently selling the devices as fun gadgets from retailers such as the Apple Store.² However, as prices fall and consumers understand that Hue bulbs consume no more electricity than white LEDs, the device is likely to enter the mainstream. Other manufacturers are looking to introduce similar products soon. 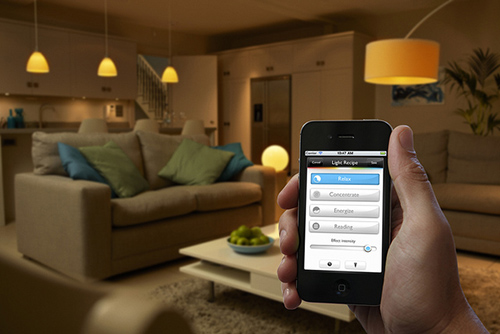