Look at how two IoT solutions use ambient light, temperature and occupancy sensors in lighting systems to provide data about efficiency and automation data.

However, the industry is now focusing on networking and the Internet of Things (IoT) movement to achieve its targets. The simple incorporation of ambient light, temperature and occupancy sensors into the lighting system, for example, can provide useful data for the efficient running of automated security and HVAC applications. Internet connectivity facilitates data sharing, centralized monitoring and control of the smart building via dashboards, visible on a range of digital devices, both fixed and portable.

This article will highlight two quite different solutions that meet this growing trend. Importantly, both support multiple protocols found in the smart building. The first is Echelon’s multiprotocol building automation platform, already being adopted by lighting systems installers taking the lighting-centric approach to IoT in buildings. Products under the spotlight include the Mini FX EVK LonWorks evaluation kit, featuring the FT5000 Smart Transceiver evaluation board, and the NodeBuilder FX Development tool.

The second approach, for lighting developers, comes in the form of Texas Instruments’ TIVA-C Series TM4C123x microcontrollers targeted at network appliances and switches, factory automation and automated building services systems. The device offers Ethernet and Wi-Fi support, connection to the cloud through partner, Exosite, and plenty of expansion opportunities for lighting and other IoT applications. Products available for evaluating this solution include the Connected LaunchPad and Evaluation Kit. 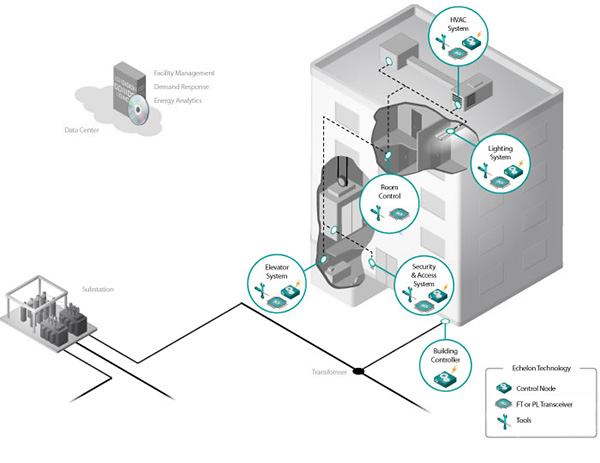 Figure 1: Smart building managers need to integrate and control disparate networks around a building. Intelligent lighting networks, implemented as part of the IoT, may become the catalyst to stimulate growth in this sector. (Courtesy of Echelon)

The primary benefits of an integrated smart building approach are: creating operational efficiencies (improved worker productivity), reducing energy consumption, and improving financial performance (profitability). A factor of growing importance is a company’s corporate social responsibility profile; declaring sustainability goals and being seen to be making a positive contribution to reducing energy consumption and CO2 emissions. For commercial landlords, smart buildings are increasingly more attractive as the systems are easier to control and cheaper to run.

According to market research company, Navigant Research,¹ commercial building automation systems have reached a tipping point, where technology, particularly for lighting control and HVAC, is accelerating adoption. The company states that intelligent lighting is the most cost efficient means of reducing electrical energy consumption, which on average accounts for 25% of a building’s electricity use.

Another market research company, Memoori,² is convinced that networked LED lighting will be the catalyst for the IoT in buildings. Permeating virtually every space inside and outside a building, LED lighting fixtures can easily be installed or retrofitted to become the sensor nodes of an intelligent network, gathering and sharing data among disparate systems. The ability to incorporate wireless sensors with light bulbs that can be IP networked will stimulate growth, not only for solid-state lighting controls, but also as a means of integrating other smart building systems. Some call this the second generation of solid-state lighting, Lighting 2.0: a lighting-centric convergence of networking and building management.

Research in the US by NEMA (National Electrical Manufacturers Association) has shown that it is the use of lighting controls that generates the most savings, compared to simply upgrading to low energy, solid-state lighting (www.nemasavesenergy.org). A networked lighting control strategy can include simple timers as well as color tuning, on/off and bi-level switching and dimming, based on data from occupancy sensors and ambient light sensors. Dimming lighting can be an effective way of reducing consumption at times of peak electricity demand, with data input from the smart grid.

Almost all new buildings and major refurbishments will include some form of building automation technology. However, according to smart energy solutions provider, Echelon, almost half of upcoming building automation projects will involve the convergence of new and legacy systems running different protocols from different vendors. Thus multiprotocol support provides significant and attractive benefits for bridging diverse industrial device networks.

Echelon’s soon-to-be-available FT6000 EVK evaluation and development kit is based on its IzoT platform designed for Industrial IoT (IIoT) applications. It supports multiple protocols and the platform is backward compatible with Echelon’s own LonWorks as well as BACnet device networks.

Meanwhile, to get started straight away, Echelon’s current model, the FT5000, is a stand-alone control-networking platform based on LonWorks. The Mini FX/FT Evaluation Kit is an affordable tool to set up, demonstrate, write, compile and load control-networking applications for devices equipped with Echelon’s microprocessors or smart twisted pair transceivers. For power line applications, the Mini FX/PL Evaluation Kit is available. With a toolset for the Neuron C programming language and example source code, developers can use the evaluation boards, I/O hardware and USB interface to connect a Windows PC to the LonWorks network.

On-board features include LCD, two LED outputs, a light level sensor and a temperature sensor. Example applications demonstrate how simple IoT node devices, such as those in lighting systems, can interact with I/O hardware and exchange data over a control network.

Connection to the Internet is via an IP-852 router, such as Echelon’s i.LON SmartServer or the i.LON 600 LonWorks IP Server. The i.LON 600 router uses IP as a standard LonWorks channel to allow LonWorks devices such as lighting nodes and sensors to be securely configured, monitored and controlled over IP or Ethernet. At the enterprise level the i.LON SmartServer supports multiple protocols to provide links between thousands of electronic devices and their respective control sensors, allowing data to be captured to generate further energy savings and improve efficiency. Web-based tools facilitate the design of visually appealing dashboards.

The Tiva C Series Connected LaunchPad TM4C1294 Evaluation Kit, for example, supports both first timers and advanced designers to set up and control IoT devices. In collaboration with cloud-based services company, Exosite, TI’s Connected LaunchPad comes with an application that will connect to the Exosite Portal free of charge, in order to demonstrate the simplicity of the link and the benefits of the service. Once connected, the operation of the board can be tracked and controlled from the web-based server.

The development board features TI’s TM4C1294 microcontroller based on a 32-bit ARM Cortex M4 120 MHz CPU with floating point capability. A range of ADCs, comparators, timers, and DMA are provided along with peripheral ports and support for 10/100 Ethernet mac and phy. 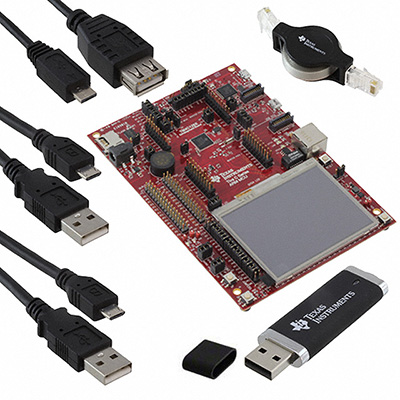 For system developers, the Tiva C Series TM4C129x Connected Development Kit is an engineering platform, with much the same features as the evaluation kit, but adding a color LCD interface, USB2.0 OTG host/device port, microSD slot and expansion interface headers for a range of USB, Ethernet and other external peripheral interfaces, including UART, I²C and CANbus. The kit includes an in-circuit debug interface and extensive software with libraries for key functions, source code examples and other utilities.

Both options are supplied with BoosterPack connection points allowing for expansion with the addition of stackable modules from both TI and third party partners. Modules include LEDs and sensors, as well as motor drives, displays, networking and Wi-Fi support. Sensor support, for example, with the BoostXL-Senshub, includes ambient light and temperature, humidity, pressure and motion detection. For Wi-Fi, the 430CC110L RF BoosterPack adds a low power wireless transceiver facility for both European and US ISM bands.

Both the LaunchPad evaluation kit and development board are supported by industry standard integrated development environments, including: Code Composer Studio, and tools from Keil, Mentor Embedded and IAR Systems.

Network-controlled intelligent lighting systems have the potential to provide a lighting-centric approach to integrating the disparate building automation systems in today’s smart buildings. IP-connected solid-state lighting has the ability to exploit the Industrial Internet of Things movement, enabling smart building systems to be visible and controllable through sophisticated graphics dashboards available via the Internet through connected digital devices.

A classic approach is through the development of network control schemes, such as those illustrated here from Echelon and Texas Instruments, that are scalable, can integrate multiple networks for data gathering and sharing, support multiple protocols and are easily connected to web-based and cloud services for visibility and control.