Light destroys art. Some wavelengths are more damaging, some media are more vulnerable to damage, but all curators and conservators face a fundamental conflict between the demands of preservation and the desire to display the objects in their care. These conflicts come to the forefront whenever a museum must decide which objects to display, for how long, and with what illumination. The recent emergence of museum-quality LED lighting is challenging existing assumptions about the “best” lighting for art objects.

Generally speaking, organic pigments and surfaces are more vulnerable to light damage than mineral-based pigments and surfaces. Ultraviolet light breaks down the chemical structure of organic materials and infrared radiation causes heat damage. Marble and glazed ceramics are nearly impervious to light, while works on paper and early albumen-based photographs are particularly fragile.

As part of a recent renovation, Rob Shakespeare, professor of lighting design at Indiana University and principal designer at Shakespeare Lighting Design, designed a new LED-based lighting installation for the Indiana University Art Museum’s1 Special Exhibitions gallery. He explained that a continuous spectrum with uniform intensity is preferable, for both conservation and aesthetic reasons. Intensity peaks will cause some colors to fade more rapidly, shifting the color balance of the object. Gaps in the spectrum do not affect the actual colors of the object, but do change the colors perceived by the viewer. An ideal light source will deliver the same spectrum regardless of brightness, giving accurate color rendition even under dim lighting.

Incandescent bulbs do not score particularly well on any of these characteristics. Their light includes substantial UV and IR components and has a pronounced yellow hue, generally requiring filters for color correction and to protect the art (Figure 1). Reducing brightness by reducing the power to the filament tends to make the light even more yellow. Filters are expensive, increasing the total cost of the lamp assembly. Furthermore, light that is generated by the bulb but then filtered out represents waste heat, increasing the load on the gallery’s climate-control system. 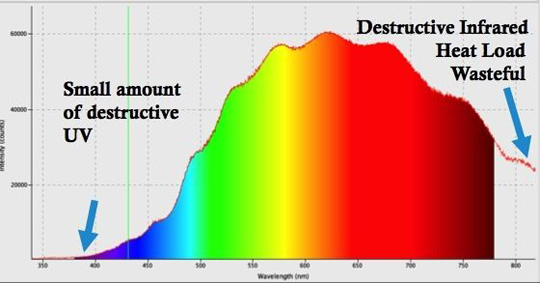 
According to Shakespeare, early LEDs were prone to strong intensity spikes in the blue portion of the spectrum, while poor red response degraded color accuracy (Figure 2). Newer commercial LED lamps combine light-emitting devices with phosphors, which act to smooth out the overall intensity spectrum. Some of the excess blue photons excite the phosphors, causing light to be re-emitted in other parts of the spectrum. In more recent lamp designs, like those used for the IU Art Museum installation, both the emitters and the phosphors have improved, providing a much more uniform spectrum (Figure 3). Dimmable LEDs maintain the same color at low intensity, a significant advantage over incandescent bulbs. 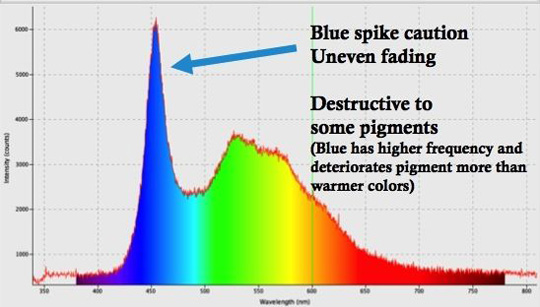 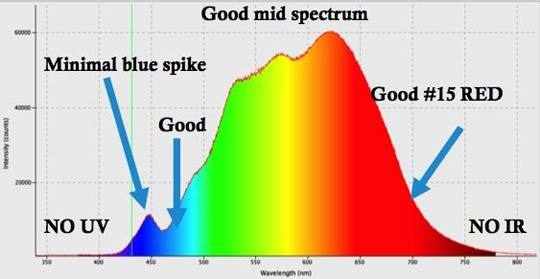 From a conservation perspective, the relatively narrow spectrum of LEDs is a major plus. Each emitter is a quantum device, producing light in a relatively narrow distribution around a single peak. When choosing emitters and phosphors, device engineers seek to minimize or eliminate UV and IR emissions in order to maximize efficiency: photons outside of the visible spectrum are wasted. In a happy accident, UV and IR wavelengths are also among the most damaging for art objects. Fade tests at the Getty Museum2 compared the effects of LED and halogen lamps on extremely light-sensitive, albumen-based photographic prints, as well as on Japanese silks, modern pigments on paper, and a variety of other media. In all cases, they found that fading under LED illumination was either the same or slightly slower than fading under halogen lamps.

For the IU Art Museum installation, Shakespeare evaluated lamps, luminaires, and track from a number of manufacturers, including Cree, Toshiba, Philips Lumileds, and others. Bruck luminaires with Xicato’s high color-rendering LED engine were ultimately selected due to their superior center beam candela dimming range and competitive cost. These are dimmable to about 25 percent intensity, allowing the same unit to be used for both light-sensitive and durable art, and eliminating the need for scrims and filters to reduce light output.

For the final design, Shakespeare worked with Bruck’s engineering team to launch a new line of linear track and track adapters, specifically aimed at the needs of museums and galleries. The installation incorporated two circuits, one at full power and one with electronic low voltage (ELV) dimmers. This approach gives the museum flexibility to choose different illumination levels for each track section depending on the needs of future exhibitions.

According to Linda Baden, a curator at the IU Art Museum, the resulting illumination was clearly superior, but also noticeably different. She wrote, “As far as aesthetic issues go, there is a very interesting discussion going on right now at the museum concerning light temperature. The clarity, crispness, and full-spectrum color afforded by the museum's 3000K LEDs is very different aesthetically from the warm incandescent lighting we are all used to.”

Similarly, at the Jordan Schnitzer Museum3 in Oregon, a side-by-side comparison of three different LEDs and the incumbent halogen light found that both museum visitors and professional staff preferred the color fidelity of LEDs to the halogen bulbs. All of the sources consulted for this article agreed that such subjective evaluations are an essential part of lamp selection. “A technically excellent LED may not meet a curator's aesthetic regarding color rendering and general “appeal,” Shakespeare said. “Art evaluation is subjective and there is a lot of wiggle room between products to meet a client’s visual needs.”

Not only is LED lighting clearly different from halogen lighting, but LED lamps with similar specifications often have noticeably different color and beam characteristics. Shakespeare conducted his own spectroscopic measurements to verify the performance characteristics of the lamps chosen for the Indiana University Art Museum installation. He found that among LEDs with the same CCT (correlated color temperature) and CRI, some were red-biased while others enhanced blues.

In fact, even lamps with the same part number from the same vendor do not necessarily give consistent results. Lighting designers at the Smithsonian4 ultimately decided against LED lighting for one gallery because they were unable to obtain enough lamps that met their specifications without flicker.

The long lifetime and low energy consumption of white LED lamps offer obvious benefits for museum and gallery lighting. Lamp replacement in a high-ceilinged gallery requires skilled staff time and, as Baden noted, there is always a chance that an accident will damage the art. LEDs are rated for up to 20 years of use at typical gallery operating schedules, compared to as little as a year or two for halogen bulbs. A typical PAR38 LED lamp consumes just 12 W of power, compared to 90 W for the halogen bulb it replaces. Since LED lamps in this category typically offer a 20 degree beam, while the comparable halogen beam covers 25 degrees, a gallery will typically use a few more LED lamps than halogens to cover the same area. Still, the energy savings are substantial.

The Jordan Schnitzer Museum used 54 Cree LRP38 “TrueWhite” LED lamps to replace 49 Sylvania PAR38 halogens. Given their average electricity cost of $0.06 per kWh, the museum estimated their annual electricity cost at $593 for halogen bulbs, but just $84 for LED lamps.

Despite such dramatic energy savings, the payback time for installation of LED lamps will vary widely, depending on lamp cost, the local cost of electricity, and installation and lamp replacement labor costs. A series of U.S. Department of Energy studies compared life-cycle costs for halogen and LED lighting in several different museums. The results are summarized in Table 1.

What remains to be done?

While the sources consulted for this article were generally very happy with LED lighting performance, it was clear that the lighting industry still has room for improvement. Consistency remains an important challenge. Inconsistent lamp performance can stem from a number of causes. Though color binning of the underlying emitters has improved, delivering the consistent color that museum lighting demands requires constant vigilance. As the Smithsonian found, compatibility issues can also arise between pre-existing dimmers and transformers and the driver built into the LED lamp.

Lighting designers would also like to see a wider selection of LED lamps. Relatively few choices are available at the extremes of very-narrow beams and high-brightness floodlights. The need for dim lighting to protect fragile materials creates a need for low-output lamps, even as the lighting industry as a whole is trying to maximize light output.

Museum-quality LED lamps are relatively new. The list of available components is changing rapidly, and indeed has changed since research for this article began. As noted above, individual museums and lighting designers will have subjective preferences depending on their aesthetic vision and the objects being viewed. Still, most will agree that the LED element itself must be dimmable, and at a minimum should deliver a CRI of 90 or better, with a CCT between 2,700 and 3,000. (Table 2)

For aesthetic and conservation reasons, the museum or lighting that is designed will want to carefully control spillover between adjacent light sources. The luminaire should support a variety of lenses and other beam-shaping accessories to place the light in the exact location desired. Typical luminaire designs will also include a reflector, responsible for distributing the light from the LED, essentially a point source, evenly across a cone. For this application, 20 degrees is the usual beamwidth.